Synapses may be of various types depending on the neuronal elements taking part.

Synapses may be of various types depending on the neuronal elements taking part. They may also be classified on the basis of their ultrastructure, and on the basis of the neurotransmitters released by them. From a physiological standpoint a synapse may be excitatory or inhibitory. Synapses in different situations can vary considerably in overall shape (Fig. 1.11); in the size, shape and nature of synaptic vesicles and in the configuration of the presynaptic and postsynaptic areas of dense cytoplasm. 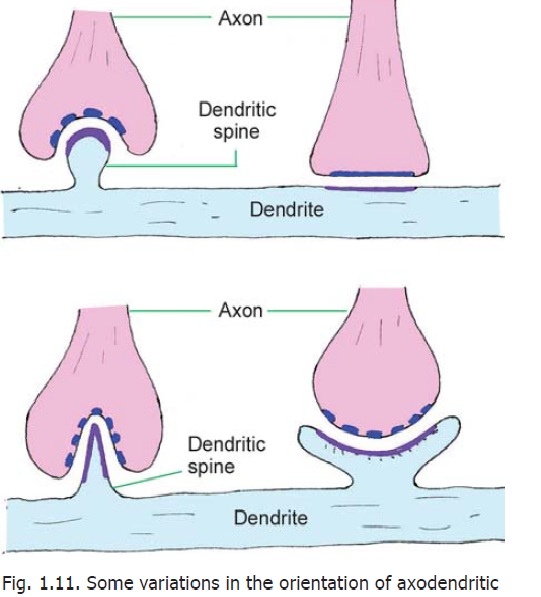 Two main types of synapses are recognised on the basis of their ultrastructure.

Asymmetric or Type I synapses:In these synapses the subsynaptic zone of dense cytoplasm isthicker on the presynaptic side. The synaptic cleft is about 30 nm. Such synapses are excitatory.

Symmetric or Type II synapses:In these synapses the subsynaptic zones of dense cytoplasm arethin and of similar thickness on both sides. The synaptic cleft measures about 20 nm.Various synapses intermediate in structure between these two main types are also encountered. The vesicles to be seen within synapses can also be of various types. Some vesicles are clear while others have dense cores. They may be pleomorphic (i.e., a mixture of various shapes). The appearance of vesicles can often be correlated with the neurotransmitter present. On the basis of these characters some sub-varieties of Type 1 and Type II synapses that have been recognised are given in Fig. 1.13. 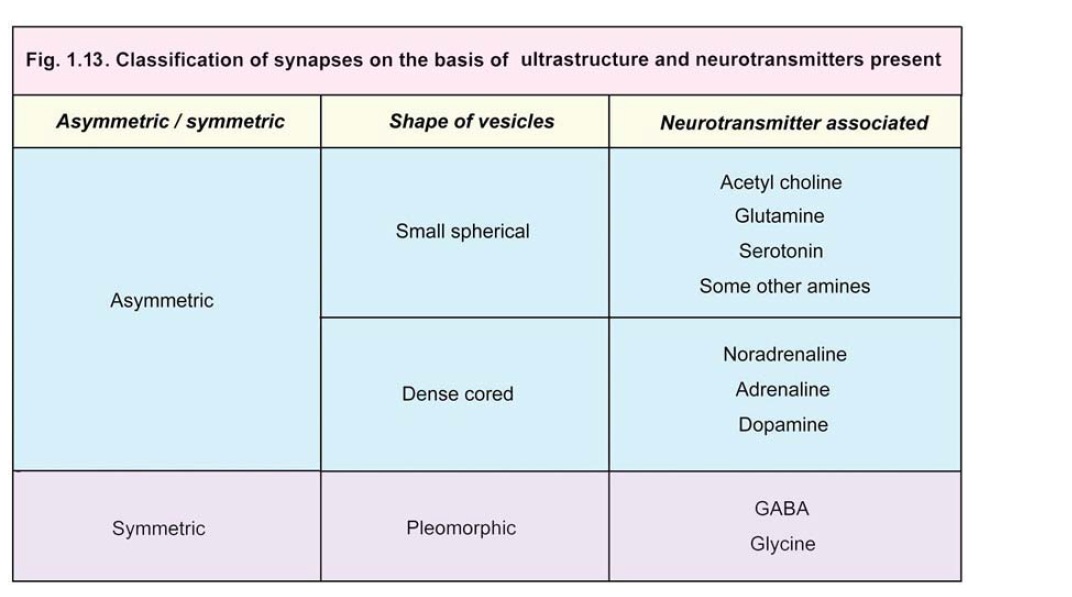 Through its ramifications an axon usually establishes synapses with several different neurons; but in some situations it synapses with one neuron only. Some axons bear boutons that do not come into direct contact with other neurons. Such boutons may represent areas where neurotransmitters are released into surrounding areas, and can have widespread rather than localised effect.

At some sites specialised regions may be seen in relation to synapses. They are mentioned here as they are given specific names.

In some synapses in the retina and internal ear vesicles are arranged around a rod-like element placed at right angles to the cell membrane. This configuration is called a synaptic ribbon. Within some dendritic spines collections of flattened cisternae (endoplasmic reticulum) with associated dense material are seen. These are given the name spine apparatus.

Synapses involving the release of neurotransmitters are referred to as chemical synapses. At some sites one cell may excite another without the release of a transmitter. At such sites adjacent cells have direct channels of communication through which ions can pass from one cell to another altering their electrical status. Such synapses are called electrical synapses.

At the site of an electrical synapse plasma membranes (of the two elements taking part) are closely applied, the gap between them being about 4 nm. Proteins called connexins project into this gap from the membrane on either side of the synapse. The proteins are so arranged that small open channels are created between the two synaptic elements.

Electrical synapses are common in lower vertebrates and invertebrates. They have been demonstrated at some sites in the brains of mammals (e.g., in the inferior olive and cerebellum).

Influence of neural activity on synapses

It has been shown that neural activity acts as a stimulus for development of new synapses and for increase in their size, specially in early postnatal life. Some experiments show that even in later life (in some situations) brief synaptic activity can have an influence on the subsequent activity of the synapse. This is specially true in areas like the hippocampus and may be associated with memory.