Peripheral nerves are collections of nerve fibres. These are of two functional types.

Peripheral nerves are collections of nerve fibres. These are of two functional types.

a.              Some nerve fibres carry impulses from the spinal cord or brain to peripheral structures like muscle or gland: they are calledefferent or motor fibres. Efferent fibres are axons of neurons (the cell bodies of which are) located in the grey matter of the spinal cord or of the brainstem.

b.              Other nerve fibres carry impulses from peripheral organs to the brain or spinal cord: these are called afferent fibres. Many (but not all) afferent fibres are concerned in the transmission of sensations like touch, pain etc.: they are, therefore, also called sensoryfibres. Afferent nerve fibres are processes of neurons that are located (as a rule) in sensory ganglia.

In the case of spinal nerves these ganglia are located on the dorsal nerve roots. In the case of cranial nerves they are located on ganglia situated on the nerve concerned (usually near its attachment to the brain). The neurons in these ganglia are usually of the unipolar type. Each unipolar neuron gives off a peripheral process which passes into the peripheral nerve forming an afferent nerve fibre. It also gives off a central process that enters the brain or spinal cord.

From what has been said above it will be clear that the afferent nerve fibres in peripheral nerves are functionally dendrites. However, their histological structure is exactly the same as that of axons. 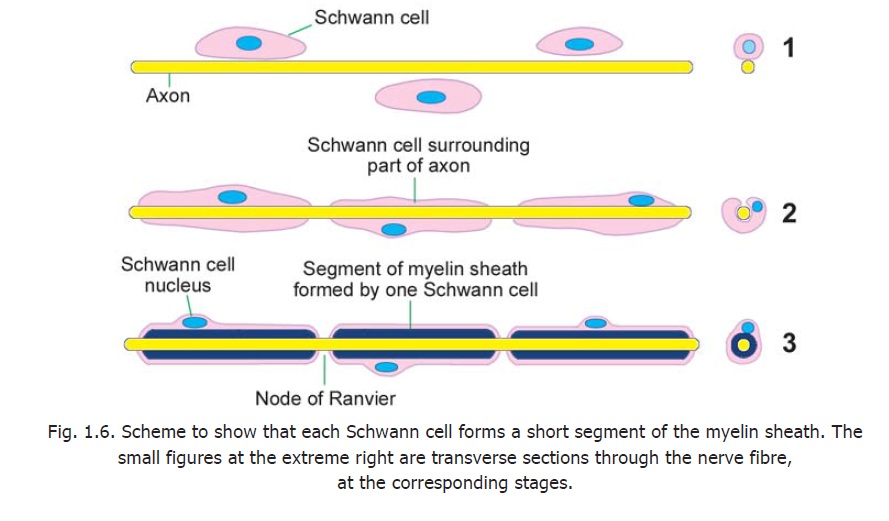 Each nerve fibre is surrounded by endoneurium (Fig. 1.14). This is a layer ofconnective tissue The endoneurium holds adjoining nerve fibres together and facilitates their aggregation to form bundles or fasciculi. Apart from collagen fibres the endoneurium contains fibroblasts, Schwann cells, endothelial cells and macrophages. 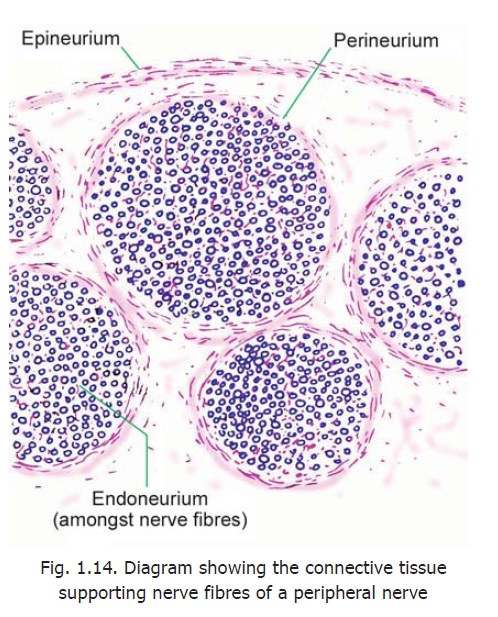 A very thin nerve may consist of a single fasciculus, but usually a nerve is made up of several fasciculi. The fasciculi are held together by the epineurium. This is a fairly dense layer of connective tissue that surrounds the entire nerve.

The epineurium contains fat that cushions nerve fibres. Loss of this fat in bedridden patients can lead to pressure on nerve fibres and paralysis.

Blood vessels to a nerve travel through the connective tissue that surrounds it. Severe reduction in blood supply can lead toischaemic neuritis and pain.

In a transverse section across a peripheral nerve it is seen that the nerve fibres vary considerably in diameter. Fibres of larger diameter are myelinated while those of smallest diameters are unmyelinated. It is well established that by and large fibres of larger diameter conduct impulses more rapidly than those of smaller diameter. Various schemes for classification of nerve fibres on the basis of their diameter and their conduction velocity have been proposed. The best known classification is as follows.

The fastest conducting fibres are called Type A fibres. Their conduction velocity is 30 to 120 m/sec; and their diameter varies from 1 to 2 μm. They are myelinated.

Type A fibres are further divided (in descending order of diameter and conduction velocity) into three subtypes: alpha (Aα), delta (Aδ) and gamma (Aγ). Type A fibres perform both motor and sensory functions as follows: 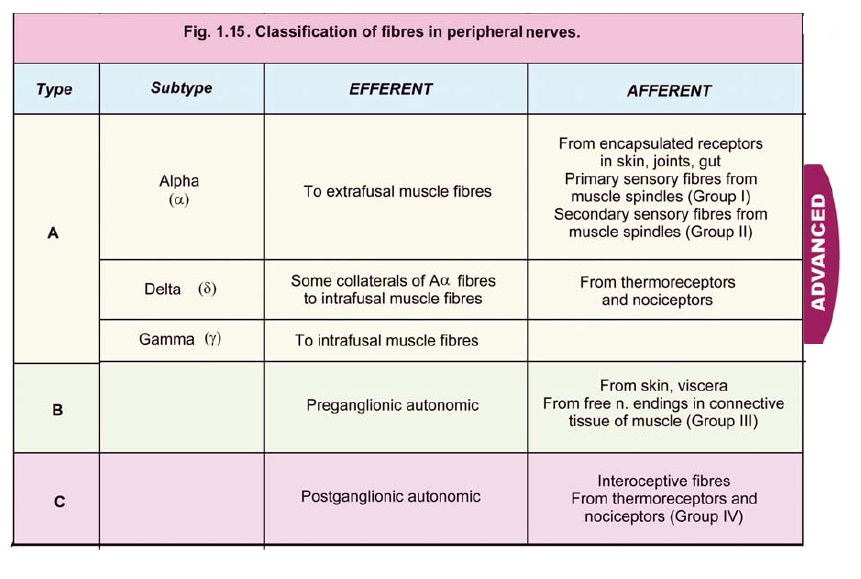 Type B fibres have a conduction velocity of 4 to 30 m/sec; and their diameter is less than 3 μm. They are myelinated. They are either preganglionic autonomic efferent fibres (motor), or afferent fibres from skin and viscera, and from free nerve endings in connective tissue of muscle (also called Group III fibres).

In contrast to type A and type B fibres, type C fibres are unmyelinated. They have a conduction velocity of 0.5 to 4 m/sec; and their diameter is 0.5 to 4 μm. These are postganglionic autonomic fibres, and some sensory fibres conveying pain. (These include nociceptive fibres from connective tissue of muscle: Group IV fibres. Note that the terms Group I to IV all refer to afferents from muscle tissue). Some fibres from thermoreceptors and from viscera also fall in this category.

Further Consideration of the Structure of the Myelin Sheath.

From Fig. 1.16 it will be seen that each layer of plasma membrane helping to form the myelin sheath has an internal or cytoplasmic surface that comes in contact with the internal surface of the next layer; and an external surface that meets the external surface of the next layer. When the myelin sheath is examined with the higher magnifications of the electron microscope it shows alternate thick and thin lines. The thick lines (called period lines or major dense lines) represent the fused cytoplasmic surfaces of two adjacent layers of the plasma membrane, whereas the thin lines (called intraperiod lines or minor dense lines) represent the fused external surfaces of two adjacentmembranes. Some other terms of interest are shown in Fig. 1.16. 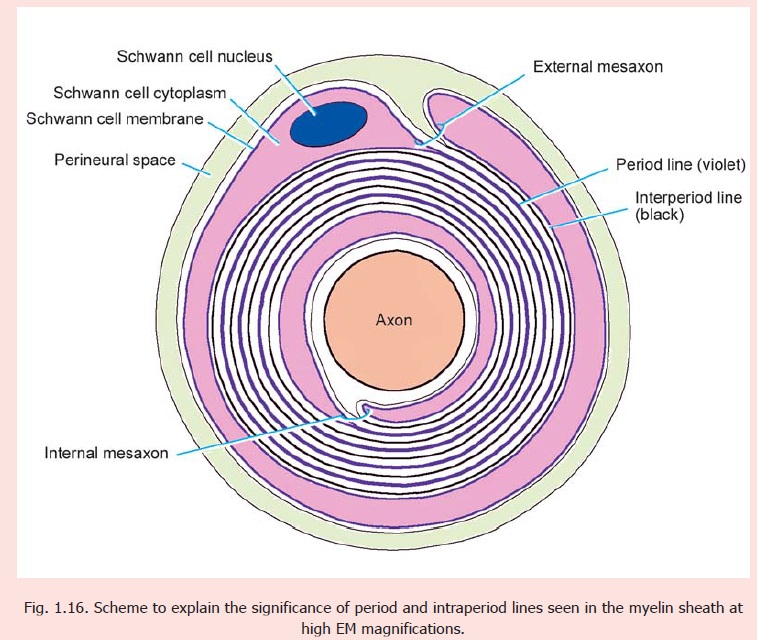 With the light microscope oblique clefts can often be seen in the myelin sheath (Fig. 1.17). These clefts are called the Schmidt Lanterman clefts. Many workers have considered these clefts to be artefacts. However, EM studies show the clefts to be areas where adjoining layers of Schwann cell plasma membrane (forming the myelin sheath) have failed to fuse (Fig. 1.18) leaving (i) a layer of Schwann cell cytoplasm that passes spirally around the axon in the position of the period line; and (ii) a spiral space through which the perineural space communicates with the periaxonal space in the position of the intraperiod line. This space provides a path for passage of substances into the myelin sheath and axon, from the space around the nerve fibre. The clefts enlarge greatly when a nerve fibre undergoes Wallerian degeneration. 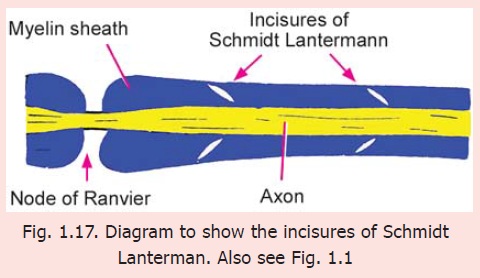 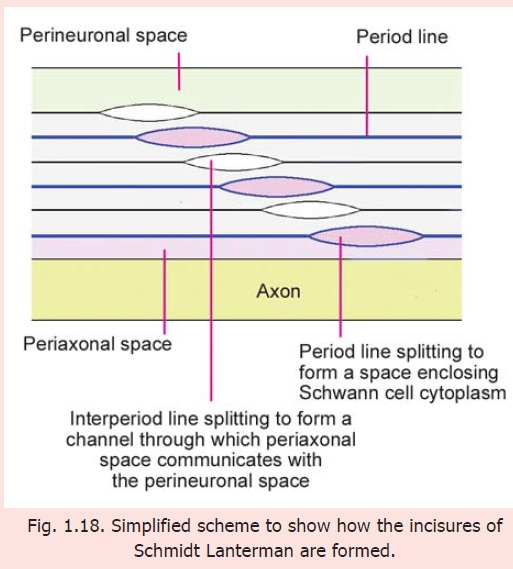 We have seen that the myelin sheath is in the form of segments separated at nodesof Ranvier. We have also noted that thepart of the nerve fibre between two such nodes is called the internode. The length of the internode is greater in thicker fibres and shorter in thinner ones. It varies from 150 to 1500 μm.

The nodes of Ranvier have great physiological importance. When an impulse travels down a nerve fibre it does not proceed uniformly along the length of the axis cylinder, but jumps from one node to the next. This is called saltatoryconduction. 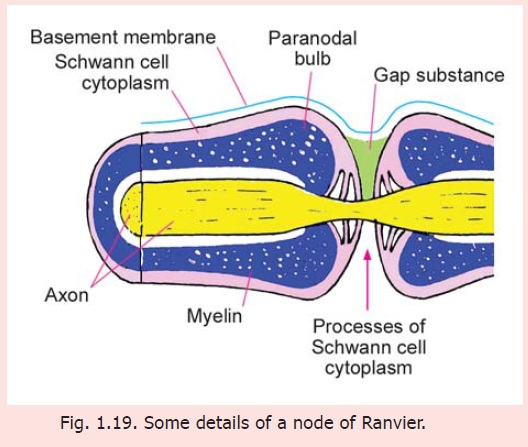 (In unmyelinated neurons the impulse travels along the axolemma. Such conduction is much slower than saltatory conduction and consumes more energy).

EM studies reveal several interesting details about the nodes of Ranvier (Fig. 1.19). Immediately next to a node the myelin sheath shows an expansion called the paranodal bulb. There are longitudinal furrows on the surface of the paranodal bulb. These furrows are filled in by Schwann cell cytoplasm containing many mitochondria. Finger-like processes of this cytoplasm extend towards the naked part of the axon and come in contact with it. These processes interdigitate with those from neighbouring Schwann cells. In the intervals between these processes the axon is covered by a gap substance that plays a role in regulating the flow of the nerve impulse by influencing the passage of ions into, and out of, the axon.

At a node of Ranvier the axon itself is much thinner than in the internode. The part of the axon passing through the paranodal bulb shows infoldings of its axolemma (cell membrane) that correspond to the grooves on the surface of the paranodal bulb (Fig. 1.20). 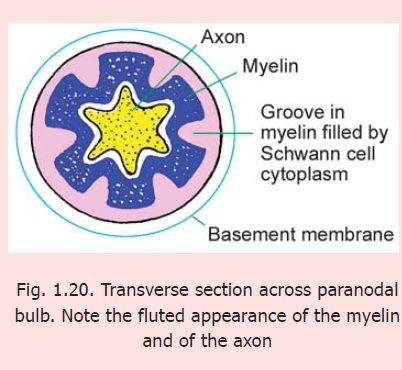 Myelin contains protein, lipids and water. The main lipids present include cholesterol, phospholipids, and glycosphingolipids. Other lipids are present in smaller amounts.

Myelination can be seriously impaired, and there can be abnormal collections of lipids, in disorders of lipid metabolism. Various proteins have been identified in myelin sheaths and abnormality in them can be the basis of some neuropathies.

Some facts about myelination

1.              It has been observed that myelin sheaths are present only around axons having a diameter more than 1.5 μm in peripheral nerves, and over 1 μm within the central nervous system. However, many axons of these or greater diameter may remain unmyelinated.

2.              In general, the larger the axon diameter, the thicker the myelin sheath, and the greater the internodal distance.

5.              Myelination does not occur simultaneously in all axons. A myelinated tract becomes fully functional only after its fibres have acquired myelin sheaths. Nerve fibres are not fully myelinated at birth. Myelination is rapid during the first year of life and becomes much slower thereafter. This is to be correlated with the gradual ability of an infant to perform more complicated actions.

Peripheral nerve fibres are separated from circulating blood by a blood-nerve barrier. Capillaries in nerves are non-fenestrated and their endothelial cells are united by tight junctions. There is a continuous basal lamina around the capillary. The blood-nerve barrier is reinforced by cell layers present in the perineurium.

Schwann cells are not to be regarded merely as a passive covering for axons. A close functional relationship exists between the two as follows.

2.              In contrast, signals arising in Schwann cells can influence the growth of axons and their diameter. Schwann cells are essential for repair of damaged peripheral nerves.