Prolonged pressure on a nerve can cause temporary loss of function. This can occur in unconsciousness or even in deep sleep, and in bedridden patients.

The changes in the part of the axon distal to the injury are referred to as anterograde degeneration or Wallerian degeneration. They take place in the entire length of this part of the axon. A few hours after injury the axon becomes swollen and irregular in shape, and in a few days it breaks up into small fragments (Fig. 1.21). The neurofibrils within it break down into granules. The myelin sheath breaks up into small segments. It also undergoes chemical changes that enable degenerating myelin to be stained selectively. The region is invaded by numerous macrophages that remove degenerating axons, myelin and cellular debris. These macrophages probably secrete substances that cause proliferation of Schwann cells and also produce nerve growth factors. The Schwann cells increase in size and produce a large series of membranes that help to form numerous tubes. We shall see later that these tubes play a vital role in regeneration of nerve fibres. 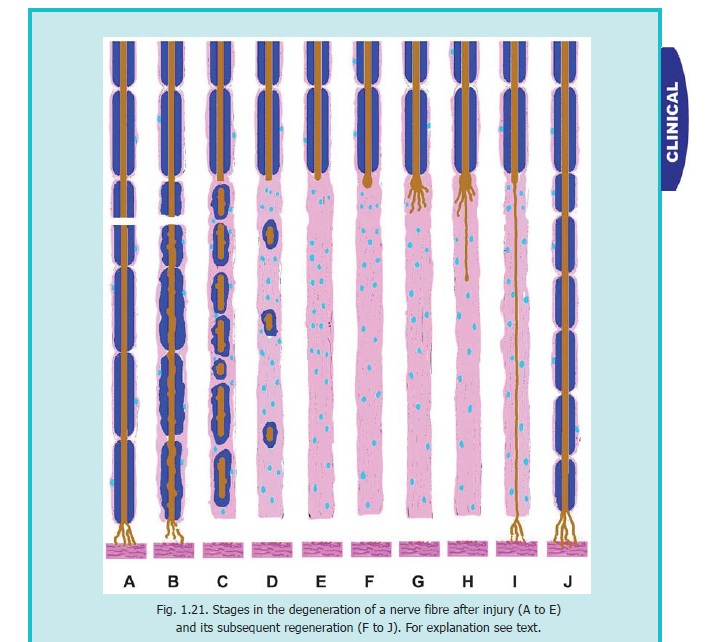 Degenerative changes in the neuron proximal to the injury are referred to as retrogradedegeneration. These changes take place in the cell body and in the axon proximal to injury.

The cell body of the injured neuron undergoes a series of changes that constitute the phenomenon of chromatolysis (Fig. 1.22). The cell body enlarges tending to become spherical. The nucleus movesfrom the centre to the periphery. The Nissl substance becomes much less prominent and appears to dissolve away: hence the term chromatolysis. Ultrastructural and histochemical alterations occur in the cell body. The severity of the reaction shown by the cell body is variable. In some cases chromatolysis ends in cell death, followed by degeneration of all its processes. The reaction is more severe when the injury to the axon is near the cell body. If the cell survives, the changes described above are reversed after a period of time. 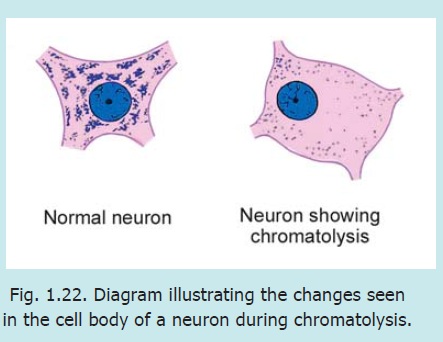 It is sometimes observed that changes resulting from axonal injury are not confined to the injured neuron, but extend to other neurons with which the injured neuron synapses. This phenomenon is referred to as transneuronal degeneration. The degeneration can extend through several synapses (as demonstrated in the visual pathway).

Changes in the proximal part of the axon are confined to a short segment near the site of injury (Fig. 1.21). If the injury is sharp and clean the effects extend only up to one or two nodes of Ranvier proximal to the injury. If the injury is severe a longer segment of the axon may be affected. The changes in the affected part are exactly the same as described for the distal part of the axon. They are soon followed by active growth at the tip of the surviving part of the axon. This causes the terminal part of the axon to swell up (Fig. 1.21 F). It then gives off a number of fine branches. These branches grow into the connective tissue at the site of injury in an effort to reach the distal cut end of the nerve (Fig. 1.21 G.H). We have seen that the Schwann cells of the distal part of the nerve proliferate to form a series of tubes. When one of the regenerating axonal branches succeeds in reaching such a tube, it enters it and then grows rapidly within it. The tube serves as a guide to the growing fibre. Axonal branches that fail to reach one of the tubes degenerate. It often happens that more than one axonal branch enters the same tube. In that case the largest branch survives and the others degenerate. The axon terminal growing through the Schwann cell tube ultimately reaches, and establishes contact with, an appropriate peripheral end organ. Failure to do so results in degeneration of the newly formed axon. The new axon formed in this way is at first very thin and devoid of a myelin sheath (Fig. 1.21 I). However, there is progressive increase in its thickness and a myelin sheath is formed around it (Fig. 1.21 J).

From the above account it will be clear that chances of regeneration of a cut nerve are considerably increased if the two cut ends are near each other, and if scar tissue does not intervene between them.

It has been observed that tubes formed by Schwann cells begin to disappear if they are not invaded by axons for a long time.

Chances of regeneration of a damaged nerve are better under the following conditions.

a.              The nerve is crushed but there is no separation of the two ends. The endoneural sheath should be intact.

b.              Separation of cut ends should be minimal. Scar tissue should not intervene between the two ends.

If the gap between the two cut ends is great the growing axonal buds get mixed up with connective tissue to form a mass called aneuroma.

Sometimes during regeneration of a mixed nerve axons may establish contact with the wrong end organs. For example, fibres that should reach a gland may reach the skin. When this happens in the auriculotemporal nerve it gives rise to Frey’s syndrome. Instead of salivation there is increased perspiration, increased blood flow and pain over skin.

For effects of damage to individual nerves see the author’s Textbook of Anatomy.

Apart from injury, neurons may be affected by degeneration. Loss, by degeneration, of myelin sheaths can give rise to several conditions the most important of which is multiple sclerosis. The condition is confined to the central nervous system, and peripheral nerves are spared. Symptoms include weakness and various sensory disturbances. Multiple sclerosis is believed to be an autoimmune disease.