Sections through the spinal cord or through any part of the brain show certain regions that appear whitish, and others that have a darker greyish colour.

Sections through the spinal cord or through any part of the brain show certain regions that appear whitish, and others that have a darker greyish colour. These constitute the white and grey matter respectively. Microscopic examination shows that the cell bodies of neurons are located only in grey matter that also contains dendrites and axons starting from or ending on the cell bodies. Most of the fibres within the grey matter are unmyelinated. On the other hand the white matter con-sists predominantly of myelinated fibres. It is the reflection of light by myelin that gives this region its whitish appearance. Neuroglia and blood vessels are present in both grey and white matter. 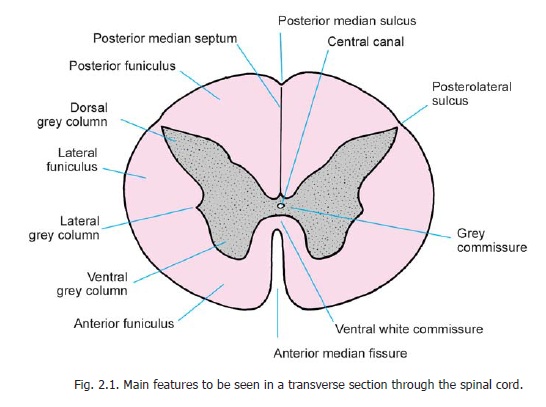 The arrangement of the grey and white matter differs at different situations in the brain and spinal cord. In the spinal cord and brainstem the white matter is on the outside whereas the grey matter forms one or more masses embedded within the white matter (Fig. 2.1). In the cerebrum and cerebellum there is an extensive, but thin, layer of grey matter on the surface. This layer is called thecortex. Deep to the cortex there is white matter, but within the latter several isolated masses of grey matter are present (Fig. 8.9). Such isolated masses of grey matter present any-where in the central nervous system are referred to as nuclei. As grey matter is made of cell bodies of neurons (and the processes arising from or terminating on them) nuclei can be defined as groups of cell bodies of neurons. Aggregations of the cell bodies of neurons may also be found outside the central nervous system. Such aggregations are referred to as ganglia. Some neurons are located in nerve plexuses present in close relationship to someviscera. These are, therefore, referred to as ganglionated plexuses. 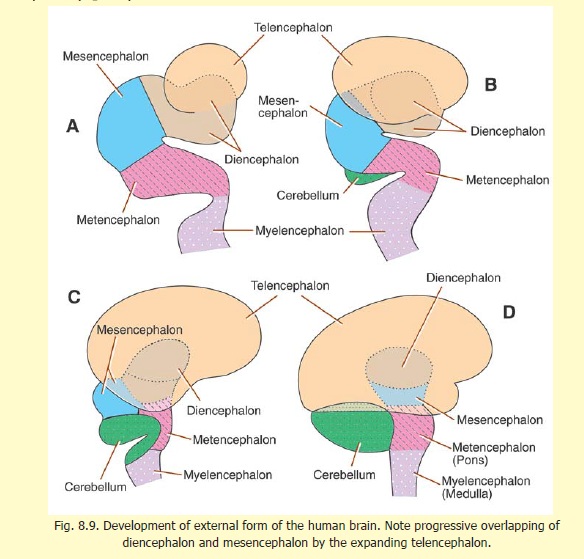 Aggregations of processes of neurons outside the central nervous system constitute peripheral nerves.