In addition to neurons, the nervous system contains several types of supporting cells.

In addition to neurons, the nervous system contains several types of supporting cells. These are:

Some workers use the term neuroglia for all these categories while others restrict the term only to supporting cells present within the brain and spinal cord. The latter convention is used in the description that follows.

Neuroglial cells may be divided into two major categories.

These are of two types.

a.              Astrocytes, which may be subdivided into fibrous and protoplasmic astrocytes.

All neuroglial cells are much smaller in size than neurons. However, they are far more numerous. It is interesting to note that the number of glial cells in the brain and spinal cord is ten to fifty times as much as that of neurons. Neurons and neuroglia are separated by a very narrow extracellular space.

In ordinary histological preparations only the nuclei of neuroglial cells are seen. Their processes can be demonstrated by special techniques.

These are small star-shaped cells that give off a number of processes (Fig. 1.23). The processes are often flattened into leaf-like laminae that may partly surround neurons and separate them from other neurons. The processes frequently end in expansions in relation to blood vessels or in relation to the surface of the brain. Small swellings called gliosomes are present on the processes of astrocytes. These swellings are rich in mitochondria. Fibrous astrocytes are seen mainly in white matter. Their processes are thin and are asymmetrical. Protoplasmic astrocytes are, on the other hand, seen mainly in grey matter. Their processes are thicker than those of fibrous astrocytes and are symmetrical. Intermediate forms between fibrous and protoplasmic astrocytes are also present. Protoplasmic extensions of astrocytes surround nodes of Ranvier, but the significance of this is not understood. 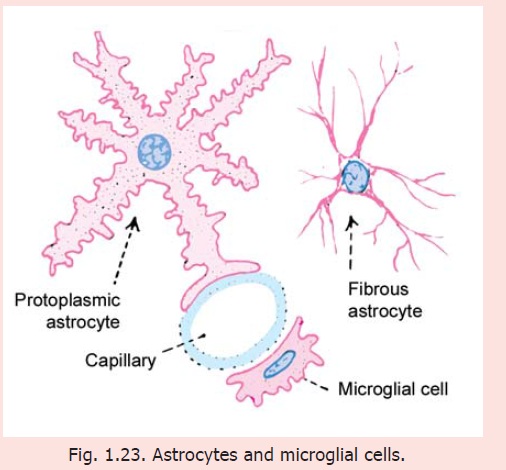 The processes of astrocytes are united to those of other astrocytes through gap junctions. Astrocytes communicate with one another through calcium channels. Such communication is believed to play a role in regulation of synaptic activity, and in metabolism of neurotransmitters and of neuromodulators.

Astrocytes play a role in maintenance of the blood brain barrier. Substances secreted by end feet of astrocytes probably assist in maintaining a membrane, the glia limitans externa, which covers the exposed surfaces of the brain. They also help to maintain the basal laminae of blood vessels that they come in contact with. 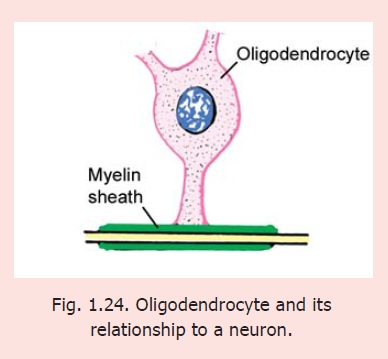 These cells have rounded or pear-shaped bodies with relatively few processes (olig = scanty). These cells provide myelin sheaths to nerve fibres that lie within the brain and spinal cord. Their relationship to nerve fibres is basically similar to that of Schwann cells to peripheral nerve fibres. However, in contrast to a Schwann cell that ensheaths only one axon, an oligodendrocyte may enclose several axons. Oligodendrocytes are classified into several types depending on the number of neurons they provide sheaths to. As a rule oligodendrocytes present in relation to large diameter axons provide sheaths to fewer axons than those related to axons of small diameter. The plasma membranes of oligodendrocytes comes into contact with axolemma at nodes of Ranvier.

These are the smallest neuroglial cells. The cell body is flattened. The processes are short. These cells are frequently seen in relation to capillaries. As already stated they differ from other neuroglial elements in being mesodermal in origin. They are probably derived from monocytes that invade the brain during fetal life. They are more numerous in grey matter than in white matter. They become active after damage to nervous tissue by trauma or disease and act as phagocytes.

The following are the functions of neuroglia.

b.              In view of their non-conducting nature they serve as insulators and prevent neuronal impulses from spreading in unwanted directions.

c.               They are believed to help neuronal function by playing an important role in maintaining a suitable metabolic environment for the neurons. They can absorb neurotransmitters from synapses thus terminating their action. It has been held that they play a role in maintaining the blood-brain barrier, but this view is open to question.

d.              As mentioned above, oligodendrocytes provide myelin sheaths to nerve fibres within the central nervous system.

e.               Ependymal cells are concerned in exchanges of material between the brain and the cerebrospinal fluid.

f.                Neuroglial cells are responsible for repair of damaged areas of nervous tissue. They proliferate in such regions (gliosis). These cells (specially microglia) may act as macrophages. (Macrophages are cells that can engulf and destroy unwanted material). Large areas of gliosis can be seen by eye and in MRI scans.