According to II law of thermodynamics, inorder to predict the spontaneity of a process entropy of universe is considered. DSuniverse is the sum of DSsystemand DSsurroundings. It is difficult to determine DSsurroundings in most of the physical and chemical processes. Therefore a thermodynamic function which reformulates the spontaneity criterion considering only the system under study is required.

where H = enthalpy or heat content of the system, T = Temperature in Kelvin and S = entropy

This expression is valid for constant temperature and pressure processes.

In an isothermal process, if DH and DS are the changes in enthalpy and entropy of the system, then free energy change DG is given by,

If 1 and 2 refer to the initial and final states of the system during the isothermal process, then

from I law of thermodynamics

For a spontaneous process, the enthalpy change at constant pressure will be negative. This is because in an exothermic process, the enthalpy of the final state (H2) is lower than the enthalpy of the initial state (H1) so that (H2-H1) is negative and the process take place spontaneously to attain the lower enthalpy state. Similarly, the entropy change (DS) increases in a spontaneous process since entropy of the final state S2 will be greater than the initial state S1 so that (S2-S1) = DS, is positive. Combining negative DH and positive DS, in the expression for free energy change DG, at constant temperature, the overall

magnitude of DG becomes negative for a spontaneous process. Here, DH and DS terms refer only to the system.

Hence, criterion for the prediction of feasibility of a reaction (or) the prediction of thermodynamic spontaneity of a process based on the free energy change (DG) of the process is given as : when at constant temperature and pressure of  the system, if,

DG < 0,   DG is -ve, the process is spontaneous and feasible

In chemical thermodynamics, spontaneous processes are also known as

All reversible processes are considered as equilibrium processes.

Thermodynamic conditions for spontaneity and equilibrium

iii)    G has a single value for the thermodynamic state of the system.

v) DG = DH - TDS. But according to I law of thermodynamics,

The decrease in free energy -DG, accompanying a process taking place at constant temperature and pressure is equal to the maximum obtainable work  from the system other than work of expansion.

This quantity is called as the "net work" of the system and it is equal to (w - PDV).

-DG represents all others forms of work obtainable from the system such  as electrical, chemical or surface work etc other than P-V work. 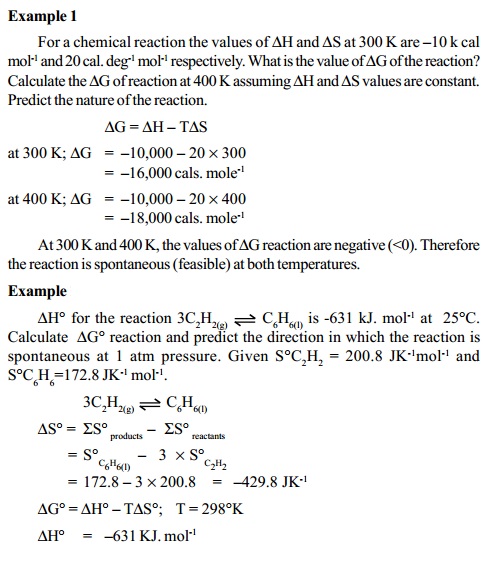 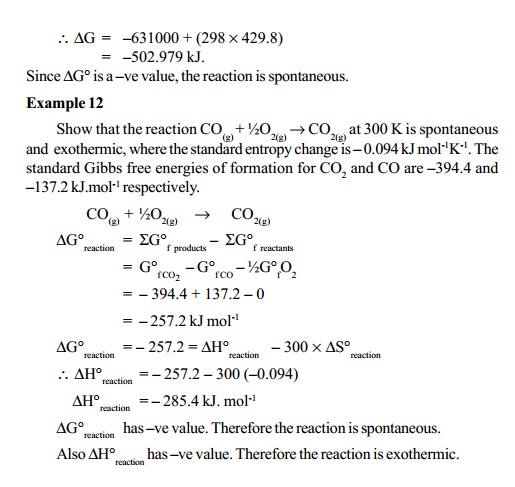