Explanation based learning has ability to learn from a single training instance. Instead of taking more examples the explanation based learning is emphasized to learn a single, specific example. For example, consider the Ludoo game. In a Ludoo game, there are generally four colors of buttons. For a single color there are four different squares. Suppose the colors are red, green, blue and yellow. So maximum four members are possible for this game. Two members are considered for one side (suppose green and red) and other two are considered for another side (suppose blue and yellow). So for any one opponent the other will play his game. A square sized small box marked by symbols one to six is circulated among the four members. The number one is the lowest number and the number six is the highest for which all the operations are done. Always any one from the 1st side will try to attack any one member in the 2nd side and vice versa. At any instance of play the players of one side can attack towards the players of another side. Likewise, all the buttons may be attacked and rejected one by one and finally one side will win the game. Here at a time the players of one side can attack towards the players of another side. So for a specific player, the whole game may be affected. Hence we can say that always explanation based learning is concentrated on the inputs like a simple learning program, the idea about the goal state, the idea about the usable concepts and a set of rules that describes relationships between the objects and the actions.

Explanation based generalization (EBG) is an algorithm for explanation based learning, described in Mitchell at al. (1986). It has two steps first, explain method and secondly, generalize method. During the first step, the domain theory is used to prune away all the unimportant aspects of training examples with respect to the goal concept. The second step is to generalize the explanation as far as possible while still describing the goal concept. Consider the problem of learning the concept bucket. We want to generalize from a single example of a bucket. At first collect the following informations.

B is a bucket if B is liftable, stable and open-vessel.

4. Description of Concept: These are expressed in purely structural forms like Deep, Flat, rounded etc. 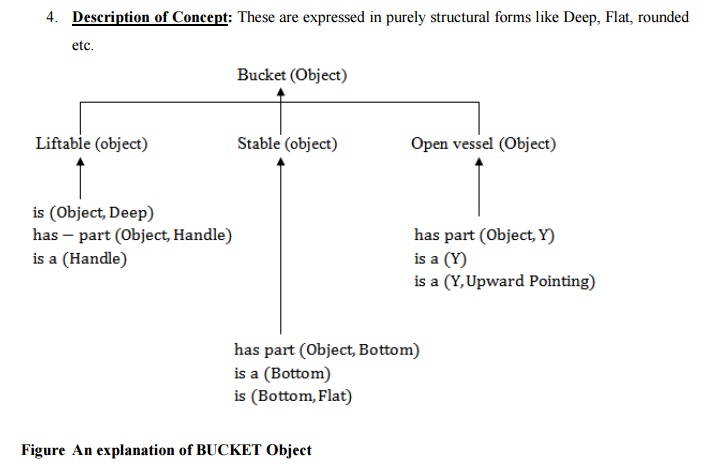 Given a training example and a functional description, we want to build a general structural description of a bucket. In practice, there are two reasons why the explanation based learning is important.