The entropy function 'S' introduced in the second law of thermodynamics is explained as below. Entropy function 'S' represents the ratio of the heat involved (q) to the temperature (T) of the process. That is S = q/T . This relation is valid only for reversible processes.

The entropy function 'S' introduced in the second law of thermodynamics is explained as below.

where the process is a reversible one. Entropy (S) and the change in entropy of the process (DS) are each state functions even though q and dq path functions.

In a reversible process, entropy of universe remains a constant.

Entropy change (DS) can be derived for various thermodynamic processes as below:

If the entropy change of the universe is zero or negative (DS<0) the system will behave as non spontaneous.

For a reversible process,

For an irreversible (spontaneous) process.

Entopy change in a physical (phase) transformation can be determined particularly for evaporation of liquids at the boiling points, using Trouton's rule.According to this rule, the heat of vaporisation (DHvap)in calories per mole divided  by the boiling point of the liquid in Kelvin is a constant equal to 21 cal deg-1 mole-1 and is known as the entropy of vapourisaiton.

This equation is useful for estimating the molar heat of vaporization of a liquid of known boiling point. Substances that deviate from this rule are as follows:

i) Low boiling liquids such as hydrogen and Helium which boil only a little above 0K.

iii) Liquids such as acetic acid whose molecules are partially associated in the vapor phase and possess very low entropy vaporization which is very much less than 21 cals/ mol/deg. Those liquids that obey Troutons rule are said to behave ideally. 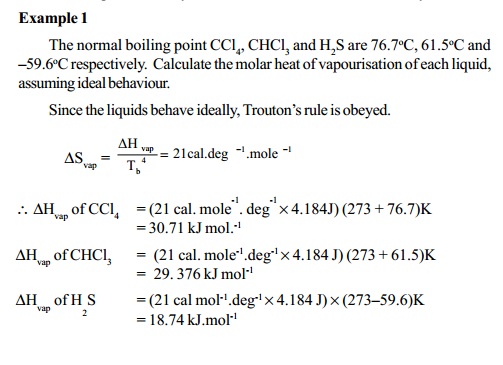