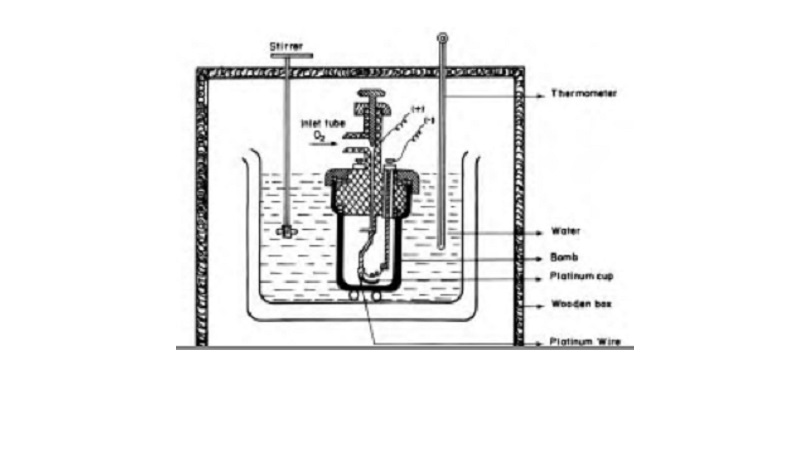 The bomb calorimeter apparatus is shown in Fig.12.3. The inner vessel or the bomb and its cover are made of strong steel. The cover is fitted tightly to the vessel by means of metal lid and screws. A weighed amount of the substance is taken in a platinum cup or boat connected with electrical wires for striking an arc instantly to kindle combustion. The bomb is then tightly closed and pressurised with excess oxygen. The bomb is lowered in water which is placed inside the calorimeter. A stirrer is placed in the space between the wall of the calorimeter and the bomb, so that water can be stirred, uniformly. The reaction is started in the bomb by heating the substance through electrical heating. During burning, the exothermic heat generated inside the bomb raises the temperature of the surrounding water bath. The enthalpy measurements in this case corresponds to the heat of reaction at constant volume. Although the temperature rise is small (only by few degrees), the temperature change can be measured accurately using Beckmann thermometer. 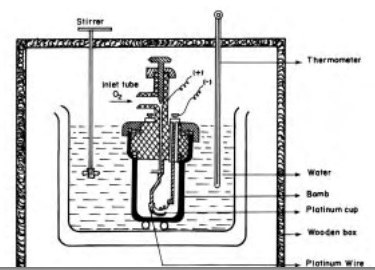 In a typical bomb calorimeter experiment, a weighed sample of benzoic acid (w) is placed in the bomb which is then filled with excess oxygen and sealed. Ignition is brought about electrically. The rise in temperature (∆T) is noted. Water equivalent of the calorimeter is known from the standard value of enthalpy of combustion of benzoic acid.

Enthalpy of combustion at constant pressure of the substance is calculated from the equation,

and ∆n(g) is known from the difference in the number of moles of the products and reactants in the completely balanced equation of combustion of the substance with excess oxygen. 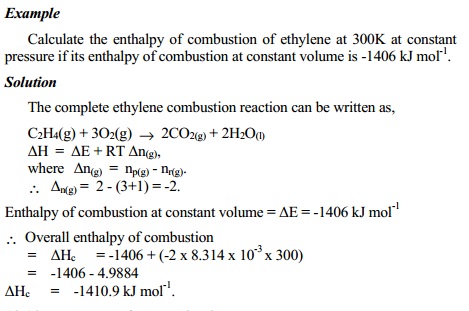