The study on the "nature of forces that hold or bind atoms together to form a molecule" is required to gain knowledge of the following- 1. to know about how atoms of same element form different compounds combining with different elements. 2. to know why particular shapes are adopted by molecules. 3. to understand the specific properties of molecules or ions and the relation between the specific type of bonding in the molecules.

1.     to know about how atoms of same element form different compounds combining with different elements.

2.     to know why particular shapes are adopted by molecules.

3.     to understand the specific properties of molecules or ions and the relation between the specific type of bonding in the molecules.

Existence of a strong force of binding between two or many atoms is referred to as a Chemical Bond and it results in the formation of a stable compound with properties of its own. The bonding is permanent until it is acted upon by external factors like chemicals, temperature, energy etc. It is known that, a molecule is made up of two or many atoms having its own characteristic properties which depend on the types of bonding present.

Chemical bonds are basically classified into three types consisting of

(i) ionic or electrovalent bond (ii) covalent bond and (iii) coordinate-covalent bond. Mostly, valence electrons in the outer energy level of an atom take part in the chemical bonding.

In 1916, W.Kossel and G.N.Lewis, separately developed theories of chemical bonding inorder to understand why atoms combined to form molecules. According to the electronic theory of valence, a chemical bond is said to be formed when atoms interact by losing, gaining or sharing of valence electrons and in doing so, a stable noble gas electronic configuration is achieved by the atoms.

Except Helium, each noble gas has a stable valence shell of eight electrons. The tendency for atoms to have eight electrons in their outershell by interacting with other atoms through electron sharing or electron-transfer is known as the octet rule of chemical bonding.

1.   In the periodic table, the highly electronegative halogens and the highly electropositive alkali metals are separated by the noble gases. Therefore one or small number of electrons are easily gained and transferred to attain the stable noble gas configuration.

2.     The formation of a negative ion from a halogen atom and a positive ion from an alkali metal atom is associated with the gain and loss of an electron by the respective atoms.

4.    The negative and positive ions are bonded and stabilised by force of electrostatic attraction.

Kossel's postulates provide the basis for the modern concepts on electron transfer between atoms which results in ionic or electrovalent bonding.

For example, formation of NaCl molecule from sodium and chlorine atoms can be considered to take place according to Kossel's theory by an electron transfer as:

where [Ne] = electronic configuration of Neon

NaCl is an electrovalent or ionic compound made up of sodium ions and chloride ions. The bonding in NaCl is termed as electrovalent or ionic bonding. Sodium atom loses an electron to attain Neon configuration and also attains a positive charge. Chlorine atom receives the electron to attain the Argon configuration and also becomes a negatively charged ion. The coulombic or electrostatic attraction between Na+ and Cl- ions result in NaCl formation.

Similarly formation of MgO may be shown to occur by the transfer of two electrons.

The valence electron transfer theory could not explain the bonding in molecules like H2, O2, Cl2 etc., and in other organic molecules that have ions.

G.N.Lewis, proposed the octet rule to explain the valence electron sharing between atoms that resulted in a bonding type with the atoms attaining noble gas electronic configuration. The statement is : "a bond is formed between two atoms by mutual sharing of pairs of electrons to attain a stable outer-octet of electrons for each atom involved in bonding". This type of valence electron sharing between atoms is termed as covalent bonding. Generally homonuclear diatomics possess covalent bonds.

It is assumed that the atom consists of a `Kernel' which is made up of a nucleus plus the inner shell electrons. The Kernel is enveloped by the outer shells that could accommodate a maximum of eight electrons. The eight outershell electrons are termed as octet of electrons and represents a stable electronic configuration. Atoms achieve the stable outer octet when they are involved in chemical bonding.

In case of molecules like F2, Cl2, H2 etc., the bond is formed by the sharing of a pair of electrons between the atoms. For example, consider the formation of a fluorine molecule (F2). The atom has electronic configuration. [He]2s2 3s2 3p5 which is having one electron less than the electronic configuration of Neon. In the fluorine molecule, each atom

contributes one electron to the shared pair of the bond of the F2 molecule. In this process, both the fluorine atoms attain the outershell octet of a noble gas (Argon) (Fig. (a)). Dots (·) represent electrons. Such structures are called as Lewis dot structures.

Lewis dot structures can be written for combining of like or different atoms following the conditions mentioned below :

1.     Each bond is the result of sharing of an electron pair between the atoms comprising the bond.

2.     Each combining atom contributes one electron to the shared pair.

3.     The combining atoms attain the outer filled shells of the noble gas configuration. 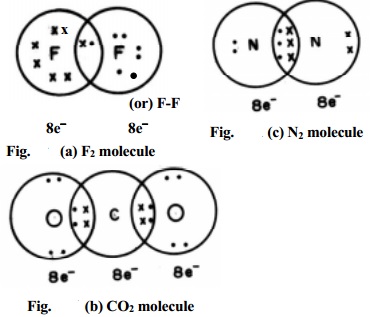 In carbon dioxide (CO2) two double bonds are seen at the centre carbon atom which is linked to each oxygen atom by a double bond. The carbon and the two oxygen atoms attain the Neon electronic configuration.

When the two combining atoms share three electron pairs as in N2 molecule, a triple bond is said to be formed. Each of the Nitrogen atom shares 3 pairs of electrons to attain neon gas electronic configuration.