Life expectancies have increased dramatically. In the years of the Roman Empire, people lived only two or three decades; early in the twentieth century, death by age 40 was common.

Life expectancies have increased dramatically. In the years of the Roman Empire, people lived only two or three decades; early in the twentieth century, death by age 40 was common. By 1955, worldwide life expectancy had reached 48 years; the world aver-age was 68 in 1998 and is far beyond that today in many countries (WHO, 1998). These demographic changes mean that a larger proportion of the world’s population is old than ever before, and this has encouraged a growing interest in the nature of age-related changes in cognitive functioning, as well as the steps that can be taken to halt or even reverse the decline associated with aging. A number of encouraging early studies have suggested predictors of “successful aging” and other studies have offered mental training programs or strategies that can help people retain and improve their cognitive abilities (Baltes, Staudinger, & Lindenberger, 1999; Freund & Baltes, 1998; Hertzog, Kramer, Wilson, & Lindenberger, 2009). To appreciate this work, we need to consider how cognitive performance changes with age.

Failing memory has long been considered an unavoidable part of aging. However, some aspects of memory—including implicit memory and some measures of semantic memory—show little or no decline with aging. Age-related declines are evident, however, in measures of working memory and episodic memory (see, for example, Earles, Connor, Smith, & Park, 1998). The elderly also have trouble in accessing their memories; in fact, one of the most common complaints associated with aging is the difficulty in recalling names or specific words (G. Cohen & Burke, 1993).

Crystallized intelligence remains relatively stable across the life span and, in some stud-ies, seems to grow as the individual gains life experience. Fluid intelligence shows a very dif-ferent pattern. The decline starts when the person is in his twenties and continues as the years go by (Figure 14.39). However, the decline is gradual, and many individuals maintain much of their intellectual capacity into their sixties and seventies (Craik & Salthouse, 2000; Salthouse, 2000, 2004; Schaie, 1996; Verhaeghen & Salthouse, 1997). 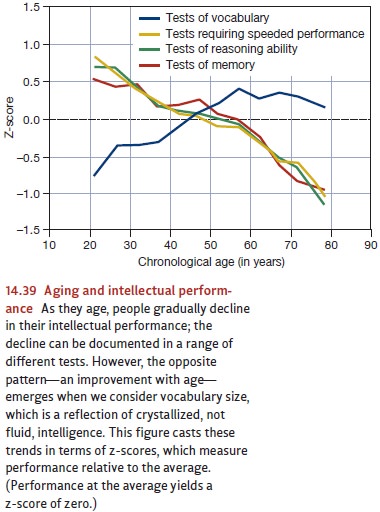 Figure 14.39 suggests that the decline in mental capacities proceeds steadily across much of the life span. Why, therefore, do we notice the decline primarily in the elderly? Why do people often lament the loss of cognitive capacities between ages 60 and 80, but not comment on the similar drop-off between ages 20 and 40? One reason is that as one  matures, gains  in  crystallized  intelligence  often  compensate  for declines in fluid intelligence. Thus, as the years pass, people master more and more strategies that help them in their daily functioning, and this balances out the fact that their thinking is not as nimble as it used to be. In addition, 30- or 40-year-olds might be less able than 20-year-olds, but we do not detect the decline because the 30- or 40- year-olds still have more than adequate capacity to manage their daily routines.  We  detect  cognitive  decline  only  later,  when  the  gradual drop-off  in  mental  skills  eventually  leaves  people  with  insufficient capacity to handle their daily chores (Salthouse, 2004). Common  sense  also  suggests  that  people  differ  markedly  in  how  they  age—some show a dramatic drop in mental capacities but others experience very little loss. This may be an instance in which common sense doesn’t match the facts. If we focus on individu- als  who  are  still  reasonably  active  and  who  describe  themselves  as  being  in  “good  to

excellent health,” then we find impressive consistency from one individual to the next in how they are affected by the passing years (Salthouse, 2004). Put differently, the drop- off we see in Figure 14.39 is not the result of a few unfortunate individuals who rapidly lose their abilities and pull down the average. Instead, the decline seems to affect most people, to roughly the same degree.

What factors are responsible for age-related cognitive declines? Some investigators pro- pose biological explanations, cast in terms of age-related changes in blood flow or neu- roanatomy, or the gradual death of neurons across the life span (Figure 14.40; Resnick et  al.,  2003).  Still  others  have  suggested  that  the  cause  of  many  of  these  cognitive changes is an age-related decline in working memory or the capacity for paying atten- tion (Craik & Bialystok, 2006). In fact, all of these hypotheses may be correct, and each may describe one of the factors that governs how individuals age. 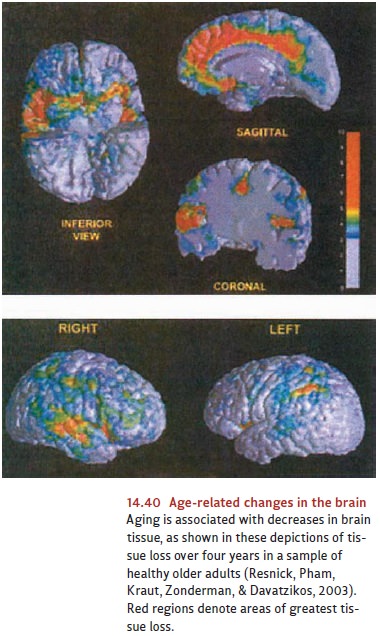 The way each individual ages is also shaped by other factors. One factor is the degree of stimulation in the individual’s life (Schaie & Willis, 1996); those who are less stim- ulated are more vulnerable to the effects of  aging. Also relevant are a wide variety of medical factors. This reflects the fact that the cells making up the central nervous sys- tem can function only if they receive an ample supply of oxygen and glucose. (In fact, the  brain  consumes  almost  20%  of  the  body’s  metabolic  energy,  even  though  it accounts for only about 2 or 3% of the overall body weight.) As a result, a wide range of bodily changes that diminish the availability of these resources can also impair brain functioning. For example, a decline in kidney function will have an impact throughout the body, but because of the brain’s metabolic needs, the kidney problem may lead to a loss  in  mental  functioning  well  before  other  symptoms  appear. Likewise, circulatory problems (including problems with the heart itself  or hardening of  the arteries) will obviously diminish the quantity and quality of the brain’s blood supply, and so can con- tribute to a cognitive decline (see, for example, Albert et al., 1995).

Finally,  cognitive  functioning  in  the  elderly  is  also  affected  by  a  number  of  age- related diseases, including Alzheimer’s disease, a disorder characterized by a progres- sive and widespread loss of nerve cells, leading to memory problems, disorientation, and, eventually, total helplessness. Evidence has made it clear that genetic factors can increase someone’s risk of Alzheimer’s disease (Goedert & Spillantini, 2006), but its exact causes remain uncertain.

These declines may sound downright discouraging, because they highlight the many fronts on which we are all vulnerable to aging, but there are ways to slow the process. For example, physical exercise has been shown to be good for not only the body (maintaining muscle strength and tone, as well as cardiovascular fitness) but also the mind. Although fitness programs are not a cure-all for the effects of aging, physical exercise can, in many cases, help preserve mental functioning in the elderly (Colcombe & Kramer, 2003; Cotman & Neeper, 1996; A. F. Kramer & Willis, 2002). There is also a growing literature on the effi-cacy of mental exercise, although the jury is still out on the extent and breadth of gains associated with mental exercise (Salthouse, 2006, 2007; Schooler, 2007).