Classification, Factors affecting of adsorption of gases on solids

'The condition in which concentration of a substance in the interfacial layers between two phases is greater than in the bulk of either phase, then the substance is said to be adsorbed at the interface and the phenomenon is known as adsorption'.

Classification of adsorption of gases on solids

The adsorption of gases on solids has been divided in to two types based on the nature of forces holding the gas molecules to the solids.

This adsorption is due to the operation of forces between solid surface and the adsorbate molecules that are similar to vander waal's forces between molecules. These forces are generally undirected and relatively non specific. Physical adsorption can also be defined as that type of adsorption where physical forces hold the gas molecules to the solids.

Chemical adsorption is defined as a type of adsorption in which chemical bonds serve the function of holding gas molecules to the surface. It occurs due to the stronger binding forces, comparable with those leading to formation of chemical compounds. It is generally an irreversible process.

The main differences can be summarised as follows:-

1.  It is due to intermolecular Vander waal's force.

2.  Depends on the nature of gas. Easily liquefiable gases are adsorbed readily.

3.  Heat of adsorption is small.

5.  If occurs rapidly at low temperature and decreases with increase of temperature.

1.  It is due to chemical bond formation.

2.  More specific than the physical adsorption.

3.  Heat of adsorption is large.

5.  Increases with increase of temperature.

6.  Change of pressure has no effect. 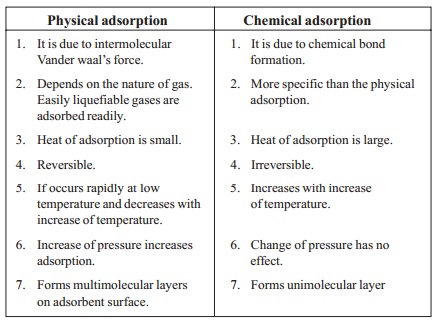 The magnitude of gaseous adsorption depends upon the following factors:

Effect of temperature and pressure

Nature of the gas

It is observed that the more readily soluble and easily liquefiable gases such as ammonia, chlorine and sulphur dioxide are adsorbed more than the hydrogen, nitrogen and oxygen. The reason is that Vander waal's or intermolecular forces which are involved in adsorption are more predominant in the former than in the latter.

Nature of the adsorbent

Adsorption is a surface phenomenon. Therefore, the greater the surface area per unit mass of the adsorbent, the greater is its capacity for adsorption under the given conditions of temperature and pressure.