Characteristics of genetic code and Central dogma of molecular biology 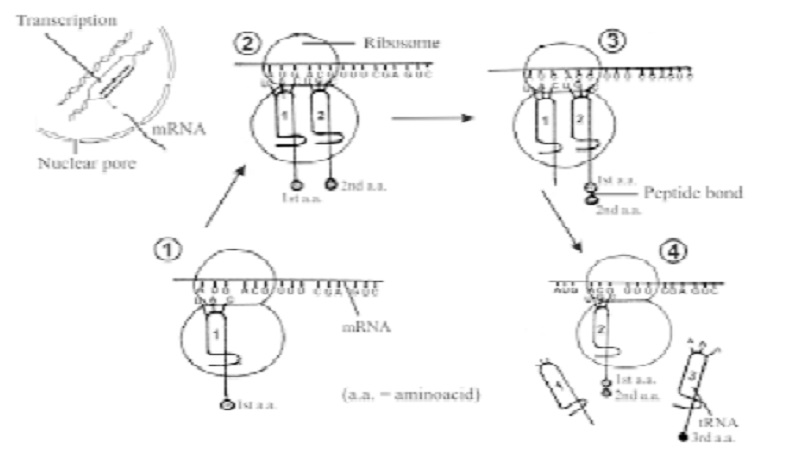 Aminoacids are the basic units of proteins. Different types of proteins are synthesized using 20 different aminoacids. But number of aminoacids and their arrangements vary in different types of proteins. These features ultimately determined by the nucleotide sequence in the DNA. At the time of protein synthesis, the sequence of information in the form of three successive nucleotide bases in the mRNA, which codes for specific aminoacid in a polypeptide is called genetic code. It is transferred from DNA to mRNA.

The unit of genetic code is codon, which has three nucleotide bases. Hence, it is also known as triplet. The four-nucleotide bases adenine, guanine, cytosine and uracil combine with each other in different combination to form 64 codons. The mRNA carries number of codons depending upon the type of protein to be synthesized. For example, if a protein consists of 100 aminoacids, there will be 300 nucleotide bases in the genetic code (100 codons).

2.        In the codons of a particular aminoacid, the first and the second aminoacids remain the same and the third nucleotide only changes.

3.        The initial or starting codon is AUG, which also code for methionine.

The genetic code is non-overlapping i.e. adjacent codons do not overlap. The non-overlapping code means that the same letter is not used to code two different aminoacids. For example, UUU codes for phenylalanine and CCC for proline.

1.        There is no signal to indicate the end of one codon and beginning of the next codon i.e. codes are arranged without space. Thus, genetic code is commaless.

2.        The same codon shall not code for two or more different aminoacids. Thus, the genetic code is non-ambiguous.

4.        The three triplets UAA, UAG and UGA do not code for any aminoacid. These are called non-sense codon. The other 61 codons are called sense codons.

Aminoacids are linked by means of peptide bonds to form a protein. A protein may contain thousands of aminoacids. The central dogma of molecular biology is illustrated as below.

The transfer of message present in the DNA is the initial step and the message is transferred to mRNA. This is known as transcription. Based on the message in the codon, the proteins are synthesized. This stage is called translation.

The process by which an enzyme system transfers the genetic information of DNA into RNA strand is called transcription. It is the process of copying of a complementary mRNA strand on a DNA strand. It requires a template DNA, ribonucleotides, triphosphates like ATP and GTP, metal ions Mg2+ and Mn2+ and RNA polymerase. The RNA polymerase has a sigma factor, which initiates transcription. During transcription, the DNA strands unwind and one of the strands functions as the template for mRNA. The nucleotides of mRNA so formed are complementary to those of DNA strand. However, in mRNA uracil replaces thymine of DNA. The information for protein synthesis present in DNA is now transcribed to mRNA. This process is known as transcription.

According to genetic information present in the mRNA, specific aminoacids are assembled to form polypeptide chain. The process of translating the nucleotide sequence of mRNA into the aminoacid sequence of a polypeptide is called translation i.e. it means decoding the message for protein synthesis. It involves attachment of mRNA to the 30S segment of the ribosomes. The enzymes activate the aminoacids. Specific tRNA picks up the activated aminoacids.

Initially, the tRNA bonds with aminoacid molecules. This reaction is catalysed by aminoacyl tRNA synthetase. The tRNAs containing specific aminoacids are now referred to 'charged tRNAs'. The actual process of translation begins, when the initiating aminoacyl tRNA binds to the ribosome and base pairs with mRNA codon AUG. This reaction is promoted by initiating factor. The polypeptide chain increases in length by the linking of successive aminoacids as per the genetic code. Thereby, elongation of polypeptide chain takes place. This reaction is promoted by elongation factor.

Stopping codons UAA, UAG and UGA signal the completion of polypeptide chain. Then, the polypeptide chain is released from the ribosomes with the help of release factors. The proteins become biologically active when they are folded to attain three-dimensional configuration. This is achieved by the attachment of phosphate or any prosthetic group to the protein.