Structure of Stoma and Mechanism of Stomatal Opening and Closing 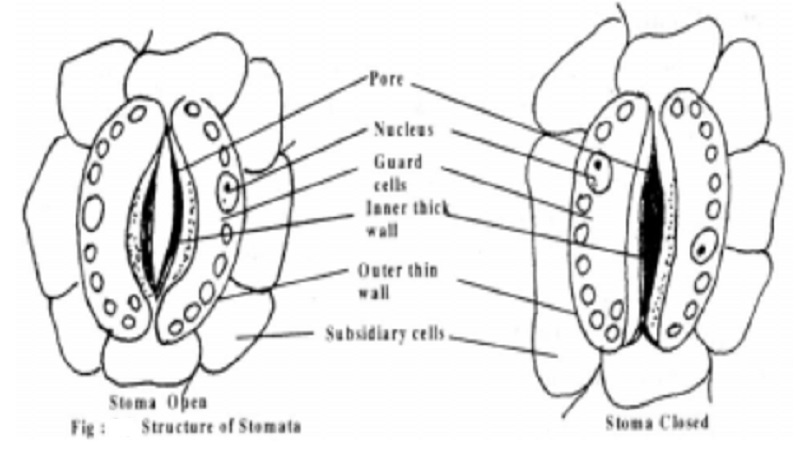 A stoma is a minute pore on the epidermis of aerial parts of plants through which exchange of gases and transpiration takes place. Each stoma is surrounded by a pair of kidney shaped guard cells.

A stoma is a minute pore on the epidermis of aerial parts of plants through which exchange of gases and transpiration takes place.

Each stoma is surrounded by a pair of kidney shaped guard cells. Each guard cell is a modified epidermal cell showing a prominent nucleus, cytoplasm and plastids. The wall of the guard cell is differentially thickened. The inner wall of each guard cell facing the stoma is concave and is thick and rigid. The outer wall is convex and is thin and elastic.

The guard cells are surrounded by a variable number of epidermal cells called subsidiary cells.

Mechanism of Stomatal Opening and Closing

Opening and closing of stomata takes place due to changes in turgor of guard cells. Generally stomata are open during the day and close at night.

During night time, water from guard cells enters the subsidiary cells and as a result, the guard cells become flaccid due to decrease in turgor pressure. This causes the inner concave walls to straighten up and the stoma closes.

The actual mechanism responsible for entry and exit of water to and from the guard cells has been explained by several theories.

The most important theories are

i.   The starch-sugar interconversion theory of Steward

i.  The Starch - Sugar interconversion Theory

Steward (1964) holds that during the day the enzyme phosphorylase converts starch to sugar, thus increasing osmotic potential of guard cells causing entry of water. The reverse reaction occurs at night bringing about closure.

Levit in 1974 combined the points in Scarth's and Steward's hypothesis and gave a modified version of the mechanism of stomatal movement which was called the proton - potassium pump hypothesis.

According to this hypothesis K+ ions are transported into the guard cells in the presence of light. The sequence of events taking place are

i.        Under the influence of light, protons formed by dissociation of malic acid move from cytoplasm in to the chloroplasts of guard cells.

ii.      To counter the exit of protons, K+ ions enter the guard cells from the surrounding mesophyll cells.

iv.   Potassium malate causes increase in the osmotic potential of guard cells causing entry of water into the guard cells as a result of which the stoma opens.

v.      At night the dissociation of potassium malate takes place and K+ ions exit out of guard cells causing loss of water from guard cells and so the stoma closes

Noggle and Fritz (1976) supported this theory and gave a scheme for opening of stomata.

Dissociation into H+ and Malate

Exit of H+ and entry of K+ ions

Increase of OP of guard cells

Entry of water into guard cells

Increase in turgor of guard cells

This theory is the widely accepted one as Levitt was able to demonstrate rise in K+ ion level during the day and the formation of organic acids like malic acid with the unused CO2 present in the guard cells.