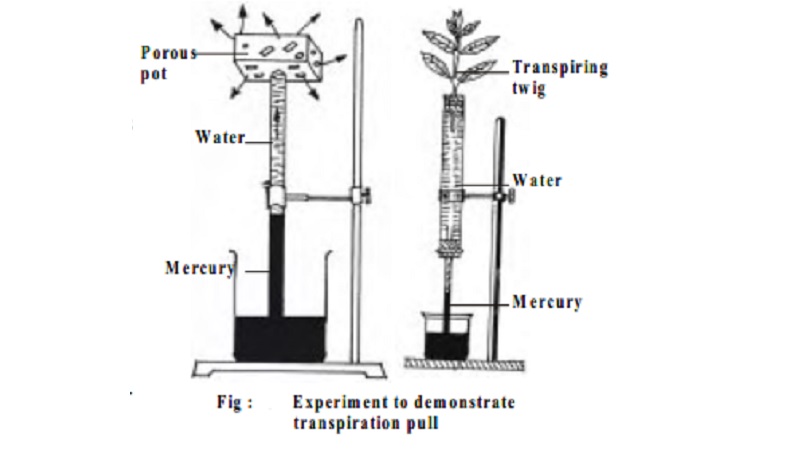 This is also called as cohesion-tension theory put forward by Dixon and Joly (1894) and supported by Renner, Curtis and Clark. This theory is based on a number of features. Cohesion and Adhesion : Mutual attraction between water molecules is called cohesion and this force may have a value as high as 350 atmospheres.

This is also called as cohesion-tension theory put forward by Dixon and Joly (1894) and supported by Renner, Curtis andClark. This theory is based on a number of features.

Mutual attraction between water molecules is called cohesion and this force may have a value as high as 350 atmospheres.

The wall of the tracheids and vessels which transport water are made up of lignin and cellulose and have high affinity for water and this is called adhesion.

Xylem vessels have perforated end walls and form a tubular structure from roots to the shoot tip. This provides a continuous channel for movement of water which cannot be pulled away from xylem wall due to cohesive and adhesive properties.

The transpiration taking place through leaves causes negative pressure or tension in xylem sap which is transmitted to the root. This is called transpiration pull which is responsible for the movement of water column upward. 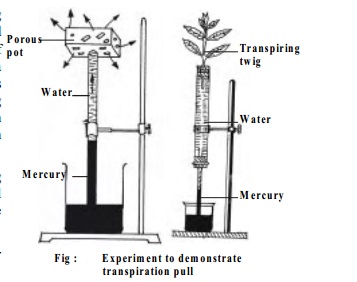 Air bubbles may enter the water column due to atmospheric pressure variations. Dixon explained that the water continuity is maintained by network of tracks of water due to interconnections between longitudinal vessels.

Septa in xylem vessels may check the flow of water. But the suction force or negative tension developed by transpiration pull is sufficient to overcome resistance developed by septa.

A young transpiring twig is fixed to a glass tube filled with water. The lower end of the tube is kept dipping in a dish containing mercury. As transpiration occurs in the twig the level of mercury rises in the tube due to the suction force created.

Instead of the transpiring twig, if a porous dry pot filled with water is used, the same results are got.

Thus  the  cohesion  - tension or transpiration pull theory best explains the ascent of sap as it stands today but still this theory is also not completely accepted.