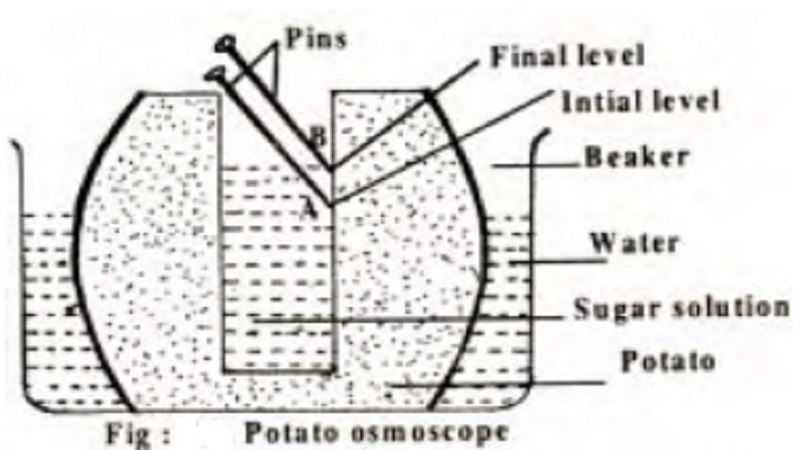 The process of osmosis may be demonstrated by the simple osmometer which is the thistle funnel experiment.

Demonstration of osmosis in a living system can be one using the potato osmoscope.

A potato is peeled and one side is flattened which serves as the base. A cavity is made in the potato and is filled with concentrated sugar solution and a pin mark is made to indicate the initial level. This potato is then placed in a beaker containing coloured water for some time.

This proves the entry of water into the sugar solution through the potato tissues which serve as the selective permeable membrane.

When a plant cell is placed in hypertonic solution, the process of exosmosis starts and water from the cell sap diffuses out into the solution of external medium. This causes a reduction in the tension of the cell wall and brings about the contraction of protoplasm due to the continuous loss of water. The protoplasm becomes rounded in shape due to contraction and such a cell is said to beplasmolysed and the phenomenon is referred to as plasmolysis. The initial stage of plasmolysis where the protoplasm just starts leaving the cell wall is called incipient plasmolysis.

When a completely plasmolysed cell is again placed in water or a hypotonic solution, endosmosis takes place and the protoplasm regains its original state and shape. i.e., the cell becomes fully turgid. This phenomenon is the reverse of plasmolysis and is calleddeplasmolysis. 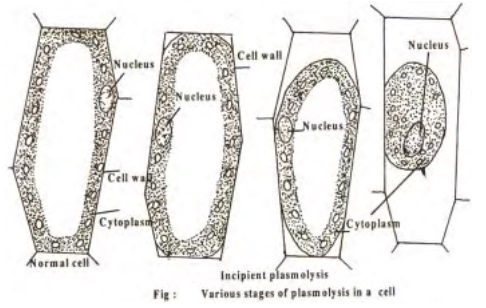 2.          Helps to preserve meat, jellies and used in pickling as their salting kills bacteria by plasmolysis.

3.          Used to prove the permeability of cell wall and selectively permeable nature of plasma membrane.

When the plant cell is placed in water, it will swell but will not burst. Due to the negative osmotic potential of the cell sap, water moves into the cell and causes the plasma membrane to press against the cell wall. This pressure responsible for pressing the plasma membrane against cell wall is called turgor pressure.

Turgor pressure may also be defined as the hydrostatic pressure developed inside the cell on the cell wall due to endosmosis.

As a result of turgor pressure on the cell wall, the rigid cell wall exerts an equal pressure in the opposite direction called wall pressure. Under these conditions, the plant cell is said to be turgid.