Biography of Mendel And Mendel's Experiments on Mendel's Laws of Inheritance 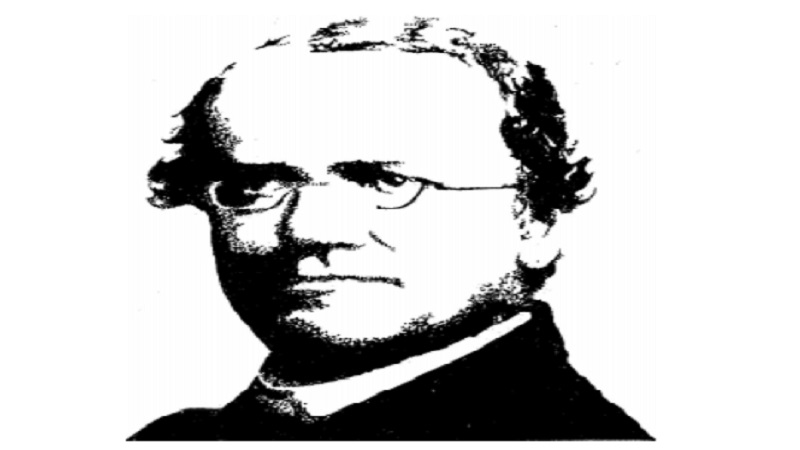 Gregor Johann Mendel was an Austrian monk, who was the first to explain the mechanism of transmission of characters from the parents to the offsprings. He maintained that there were particles called factors, which carried the traits to the subsequent generation. This holds good even today and since he is the pioneer of modern Genetics, he is called The Father of Genetics.

Gregor Johann Mendel was an Austrian monk, who was the first to explain the mechanism of transmission of characters from the parents to the offsprings. He maintained that there were particles called factors, which carried the traits to the subsequent generation. This holds good even today and since he is the pioneer of modern Genetics, he is called The Father of Genetics.

Gregor Johann Mendel was born in 1822 to a family of poor farmers in Silisian, a village in Heizendorf which is now a part of Czechoslovakia. After finishing his high school, at the age of 18, he entered the Augustinian monastery at Brunn

as a priest. From here he went to the University of Vienna for training in Physics, Mathematics and Natural Sciences. Here he was influenced by two scientists Franz Unger (a plant physiologist) and Christian Doppler (the physicist who discovered Doppler effect) and he himself became interested in hybridisation experiments.

Mendel returned to the monastery in 1854, and continued to work as a priest and teacher in the high school. In his spare time, he started his famous experiments on garden pea plant (Pisum sativum) which assumes great historic importance. He conducted his experiments in the monastery garden for about nine years from 1856 to 1865.

The findings of Mendel and his laws were published in the journal Annual Proceedings of the Natural History Society of Brunn, in 1865. The paper was entitled Experiments in Plant Hybridisation. But his work was not accepted or lauded by the scientific world at that time because

The journal was obscure.

His concept was far ahead of his time.

Mendel not being very sure of his findings lacked an aggressive approach.

Later in the year 1900, three scientists Carl Correns of Germany, Hugo de Vries of Holland and Tshermak of Austriaindependently rediscovered Mendel's findings and brought to light the ingenuity of father Mendel. To recognise his work, it was named as Mendel's Laws and Mendelism.

He crossed two pea plants with contrasting character traits considering one character at a time. The resulting hybrids were crossed with each other. The data of many crosses were pooled together and the results were analysed carefully.

A combination of luck, foresight and the aptitude of Maths all contributed to the success of Mendel's experiments.

He chose the pea plant as it was advantageous for experimental work in many respects such as :

1.     It is a naturally self-fertilizing plant and so it is very easy to raise pure-breeding individuals.

2.     It has a short life span as it is an annual and so it is possible to follow several generations.

4.     It has deeply defined contrasting characters.

Therefore the pea plant proved to be an ideal experimental plant for Mendel.

He conducted hybridisation experiments in true breeding parents (individuals which produce the same type of offsprings for any number of generations when selfed).

He carried out his experiments to the second and third generations.

He maintained a clear statistical record of his work.

Since garden pea is self pollinating, great care was taken to see that

a.  The parents were emasculated to prevent self pollination.

b. The    anthers   were collected from male parent  and    dusted onto the female parent and the stigma was bagged.

c.  The    seeds were collected separately in marked bottles.

d.  Reciprocal crosses, (by interchanging the male   and    female parents)     were conducted to prove that there was no change in the ratio of the offsprings i.e. sex has no influence on inheritance.

F1 Generation : He crossed the parents and from the seeds obtained he raised the first filial generation. Here the plants were all tall and were called monohybrids.

F3 Generation: By selfing the F2 offsprings Mendel obtained the F3 generation. He found that

The F2 dwarf plants always bred true generation after generation whether self or cross pollinated.

Of the F2 tall plants one third bred true for tallness. The rest two thirds produced tall and dwarf in the ratio of 3:1. This meant that the F2 generation consisted of 3 types of plants.

Thus based on the constitution of factors the ratio of a Monohybrid cross is 1:2:1 which is called the genotypic ratio.

During Mendel's time structure of chromosomes or the role of meiosis was not known. So he concluded that the inheritance of characters is by particles called hereditary units or factors.

He explained the results of Monohybrid cross by making certain presumptions.

Tallness and dwarfness are determined by a pair of contrasting factors (now called as genes). A tall plant possesses a pair of determiners (represented by T-taking the first letter of the dominant character) and a plant is dwarf because it possesses determiners for dwarfness (represented as t). These determiners occur in pairs and may be alike as in pure breeding tall parents (TT) and dwarf parents (tt). This is referred to as homozygous. They may be unlike as in the monohybrid (Tt) which is referred to as heterozygous.

The two factors making up a pair of contrasting characters are called alleles or allelomorphs. One member of each pair is contributed by one parent.

The factors are always pure and when gametes are formed, the unit factors segregate so that each gamete gets one of the two alternative factors. It means that factors for tallness (T) and dwarfness (t) are separate entities and in a gamete either T or t is present. When F1 hybrids are selfed the two entities separate and then unite independently forming tall and dwarf plants.

Mendel also experimentally studied the segregation and transmission of two pairs of contrasting characters at a time. This was called the Dihybrid cross or Two-factor cross. He took up the round and wrinkled characters of seed coat along with yellow and green colour of seeds.

Mendel found that a cross between round, yellow and wrinkled green seeds

(P) produced only round yellow seeds in the F1 generation, but in the F2 generation 4 types of combinations appeared of which two were different from that of the parental combinations, in the following ratio.

Therefore the offsprings of the F2 generation in a dihybrid cross were produced is a ratio of 9:3:3:1. This ratio is called thedihybrid ratio.

In F2 generation, since all the four characters assorted out independent of the others, he said that a pair of contrasting characters behave independently of the other pair. i.e. seed colour is independent of seed coat. At the time of gamete formation in the F1dihybrid, genes for round or wrinkled character of seed coat assorted independently of the yellow or green colour of seed coat. As a result 4 types of gametes with two old and two combinations were formed namely RY, Ry, rY and ry. These 4 types of gametes on random mating produced 16 offsprings in the ratio of 9:3:3:1. The actual number of individuals got by Mendel for each of the four classes were

Mendel represented round character of seed as R and wrinkled as r, and yellow character as Y and green character as y. So the dihybrid cross was between parents having factor constitution as RRYY x rryy.

Based on his experiments of monohybrid and dihybrid cross, Mendel proposed three important laws which are now called Mendel's Laws of Heredity.

Law of dominance and recessiveness

Law of segregation or Law of purity of gametes

i. Law of Dominance

The law of dominance and recessiveness states : "When two homozygous individuals with one or more sets of contrasting characters are crossed, the characters that appear in the F1 hybrid are dominant and those that do not appear in F1 are recessive characters".

ii. Law of Segregation or Law of Purity of Gametes

The Law of segregation states that "When a pair of contrasting factors or genes or allelomorphs are brought together in a heterozygote or hybrid, the two members of the allelic pair remain together without mixing and when gametes are formed the two separate out, so that only one enters each gamete".

This law though it was a conception originally and propagated by Mendel, now it has been confirmed by cytological studies. Dominance or no dominance segregation holds good for all cases.

Law of independent assortment states : "In case of inheritance of two or more pairs of characters simultaneously, the factors or genes of one pair assort out independently of the other pairs".

Mendel gave this law based on his dihybrid cross experiment. Here the total number of individuals in F2 will be sixteen which occur in a ratio of 9:3:3:1 where two parental classes and two new combinations will be produced.

Back cross and Test Cross

If the hybrid is crossed to recessive parent, dominant and recessive phenotypes with appear in equal proportions as shown, which is called a test cross.