The pioneer work of Gregor Johann Mendel seemed to imply that every character was determined by a single factor or determiner or in other words a pair of genes influenced one trait. Later work by geneticists led to the idea that a character need not necessarily be due to the action of a single factor but may also be due to the action of several factors. These hereditary units or factors are now known as genes.

The genes interacting to affect a single trait, if present on different chromosomes will show independent assortment and no interference between the effects of different genes. The condition where one pair of genes reverses or inhibits the effect of another pair of genes by causing the modification of the normal phenotype is called gene interaction.

Gene interaction is of two types

This kind of interaction occurs between alleles of the same gene pair as in the case of incomplete dominance, co dominance and multiple allelism.

There are two pairs of independent non-allelic genes affecting a single trait.

The suppression of the gene on one locus of a chromosome by the gene present at some other locus is called epistasis meaning "standing over". The gene which is suppressed is called hypostatic and the other is the epistatic or inhibiting gene which is also called the suppressing gene.

Epistasis can be of the following types.

Due to dominant gene : Dominant gene A masks the effect of the dominant gene B. Apart from this, the term epistasis refers to all non-allelic interactions involving a pair of genes. Therefore epistasis may be responsible for the production of several modified dihybrid ratios as follows:

This type of inheritance is also called complementary gene interaction observed in Lathyrus odoratus (Sweet pea) by Bateson and Punnett. Inheritance of flower colour was studied.

Here two dominant genes C and P interact to produce purple colour. When any one of the genes is present in recessive condition, colour is not produced. Thus both the genes in the recessive state inhibit the formation of purple colour and so this has been referred to as Duplicate recessive epistasis.

If gene C is absent there is no formation of chromogen and if gene P is absent chromogen does not get converted to anthocyanin. Thus both the genes have to be in dominant state for production of purple coloured flowers. 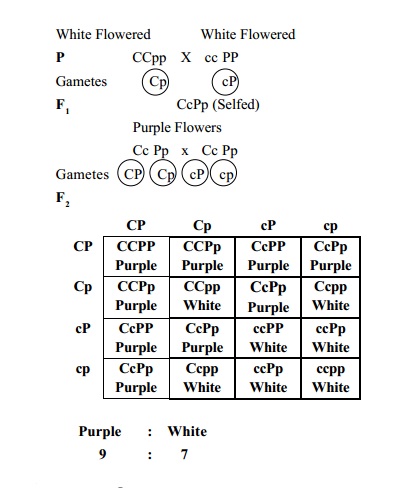 This type of interaction was studied by Sinnott in summer squash (Cucurbita pepo).

When pure breeding white fruited variety is crossed with the double recessive green variety, the F1 hybrids are all white. When the hybrids are selfed, white, yellow and green fruited plants arise respectively in the ratio of 12:3:1 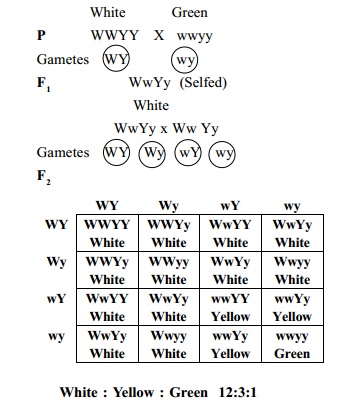 In Sorghum the dominant gene (P) is responsible for purple colour which is dominant over brown (q).

When both the dominant genes (P and Q) are brought together either in homozygous or heterozygous condition, the purple colour is changed to red.

A cross between purple (PPqq) and brown (ppQQ) results in plants with red colour in F1 and when the F1 heterozygotes are selfed, three kinds of phenotypic classes are produced in the ratio of 9:3:4 (9 Red, 3 Purple and 4 Brown).

Thus in this example, the gene `p' is epistatic to the other colour genes.

If the Sorghum is pp, it is brown inspite of other genotypes. The expression of the colour genes is masked if pp is present.

The genes for recessive epistasis are also called supplementary genes because the gene P determines the formation of colour. The alleles of the other gene Q and q specify the colour. 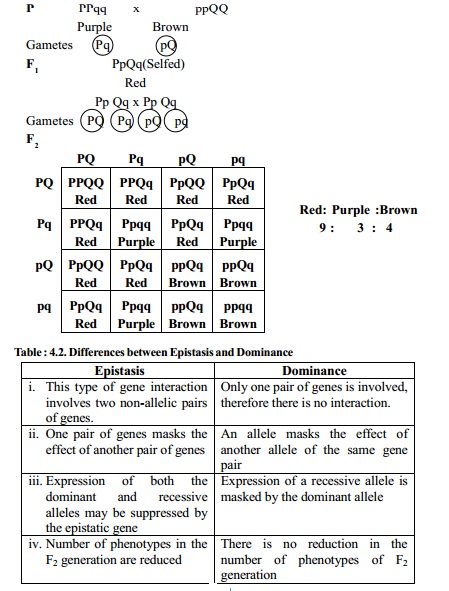