Structure and Types of Seed 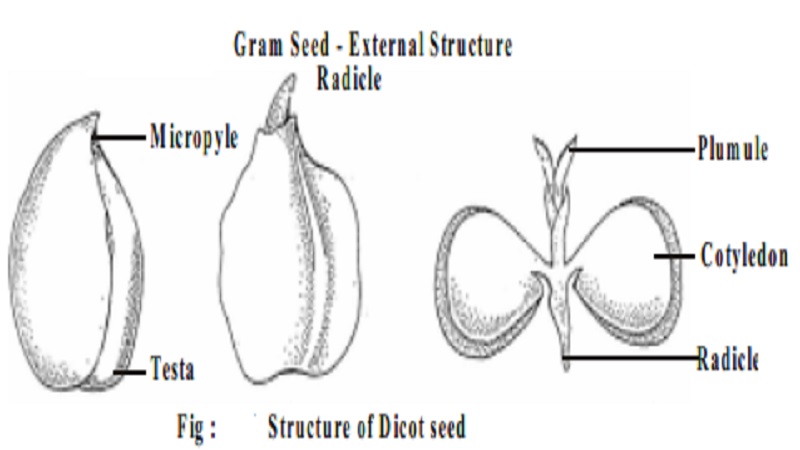 On the basis of number of cotyledons in the seed, angiosperms have been divided into two groups:

Monocotyledons having embryo with one cotyledon only, eg. maize, rice, wheat and onion.

Gram seed may be taken as an example for the study of the structure of a dicot seed.

The gram seeds are brown in colour. They are pointed at one end and round at the other end. These are contained in a small fruit called, the pod. The gram pod is two or three-seeded. The seeds are attached to the wall of the pod by a stalk called the funiculus. When the mature seed is detached, the funiculus leaves a scar on the seed called the hilum. Just blow the hilum lies the micropyle in the form of a small pore. Water is absorbed through the micropyle during the germination of seed. If the soaked seed is squeezed, water is seen to ooze out of the micropyle. The seed is covered by the tough seed coat. The seed coat consists of two layers, outer brownish testa and the papery white membranous tegmen.

The Maize grain can be taken as an example of monocotyledon seed. 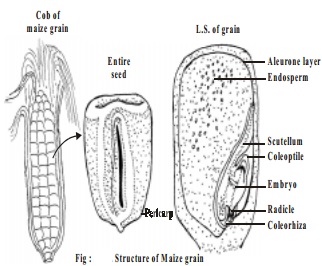 The maize grain is a small one-seeded fruit called the caryopsis. In maize grain the seed coat (testa) is fused with the fruit wall (pericarp). Externally, the

maize grain is yellow in colour and somewhat triangular in shape. On one side of the grain is a small, opaque, oval and whitish area in which embryo lies embedded. A longitudinal section of the seed shows the following structures:

1. Seed coat: It is formed of a thin layer surrounding the whole grain. This layer is made up of seed-coat and pericarp, i.e. fruit wall.

2. Endosperm: When internally examined, maize grain is found consisting of two unequal portions divided by a layer called epithelium. The bigger portion, the endosperm which is yellowish or whitish is the food storage tissue of the grain and is rich in starch. But its outermost layer contains only protein and is called aleurone layer. On the other side of the endosperm towards the pointed end lies an opaque body called embryo.

3. Embryo: It consists of one large and shield shaped cotyledon. This is also known as scutellum in the case of maize and other cereals. The axis of the embryo lies embedded in the scutellum. The axis consists of a plumule at the upper portion and the radicle at the lower end. Both radicle and plumule are enclosed in sheath. The sheath covering the plumule is known as coleoptile and that covering the radicle is known as coleorhiza. The cone-shaped coleoptile has a pore at the apex through which the first foilage leaf emerges during germination.

In gram, pea and bean the cotyledons are thick and fleshy. They store food material for the embryo during germination. Such seeds are known non-endospermic or exalubuminous seeds.

However, in seeds like castor, maize and other cereals, the cotyledons are thin and membranous. In such seeds food is stored in the endosperm. Cotyledons act as absorbing organs. They absorb food from the endosperm and supply it to the growing embryo. Such seeds are known as endospermic or albuminous seeds.