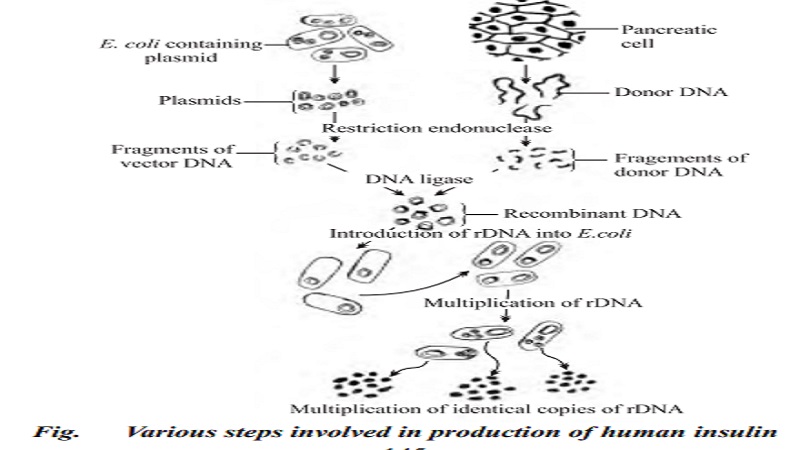 It is a technique where the selected DNA of one organism (Donor) is introduced to combine with the DNA of another organism called recipient organism. As a result, the recipient organism acquires the genetic abilities of the donor. Altering the genome of an organism by introducing genes of interest is known as gene manipulation or DNA recombinant technology. As this mechanism has the ability to engineer new organisms, it is known as genetic engineering.

Bacterial cells have different kinds of enzymes. Some of these can cut DNA into fragments and others can join such fragments. For example, restriction endonucleases discovered in 1970 are involved in cutting DNA at specific sites. Hence they are called molecular scissors. The enzyme DNA ligase discovered in 1966 acts like a paste molecule to join DNA fragments. Thus the restriction endonuclease and the DNA ligase are the basic tools required for genetic engineering.

The events of recombinant DNA technology are as follows.

1.     The DNA of donor organism or gene of interest is isolated and cut into fragments using restriction endonucleases.

2.     They are attached to a suitable replicon. Such replicon is known as vector or cloning vehicle, which is nothing but the extra chromosomal circular DNA found in the cytoplasm of Eschrichia coli is called plasmid. The plasmids are the most suitable vectors.

The DNA of the vector is cut into fragments using the same restriction endonucleases. Using the enzyme DNA ligase, the DNA fragments of donor and vector are joined together. This process is called splicing. As a result of splicing hybrid DNA or recombinant DNA (rDNA) is obtained.

4.     The rDNA is introduced into the host cells such as E.coli, Bacillus subtilis, Streptomyces sp. etc.,

5.     For this the host cells are treated with the enzyme cellulase. So that the cell wall of host becomes permeable to the entry of rDNA.

The host organism follows the instructions of 'foreign rDNA'. It continues to multiply with the foreign DNA or gene of interest. After a short time, this results in a colony of bacteria having rDNA fragments. Each colony is grown separately to obtain multiplication of rDNA fragments. At the end we get a number of colonies having identical copies of rDNA fragments. This is called molecular coloning or gene coloning.

Once the gene for the production of human insulin from pancreatic cells is introduced into E.coli, the recipient cell produces human insulin. This is the way by which the human insulin is made to be produced by bacterial cell such as E.coli. 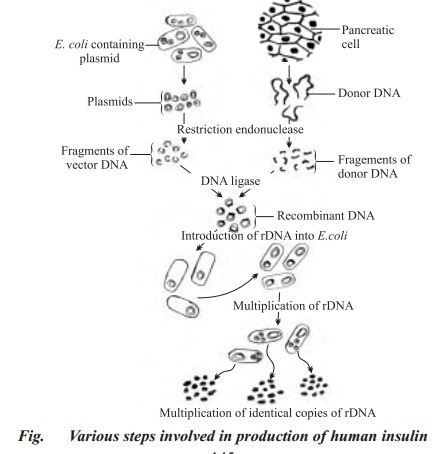