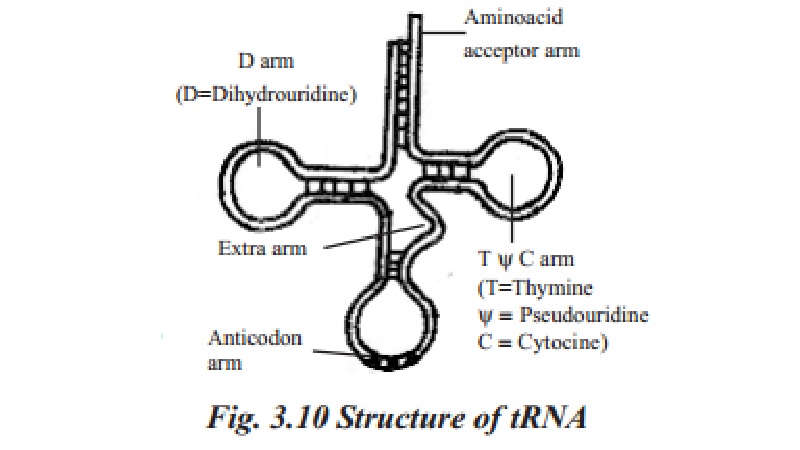 The Ribonucleic acid is otherwise known as RNA. This is universally present in all organisms except in DNA viruses. It is made up of nucleotides called ribonucleotides. There are four types of nucleotides having four different nitrogenous bases.

The Ribonucleic acid is otherwise known as RNA. This is universally present in all organisms except in DNA viruses. It is made up of nucleotides called ribonucleotides. There are four types of nucleotides having four different nitrogenous bases. But sugar and phosphate are common for all nucleotides. The four nucleotides are adenine, cytosine, guanine and uracil. The RNA plays an important role in protein synthesis. Now we will know more about their types and their role in the biology of an organism.

There are three major types of RNA which occur in all organisms. They are messenger RNA (mRNA), transfer RNA (tRNA) and ribosomal RNA (rRNA).

As the name suggests mRNA carries the genetic information from DNA to the ribosomes. Genetic informations on the DNA are transcribed into the mRNA by a process called transcription. Here the 'message' is translated into action i.e. based on the genetic information different types of proteins are synthesised. The type of gene that is involved in protein synthesis depends upon their length, kinds and sequence of nucleotides. It is about 3 to 5 per cent of the RNA content of the cell. The mRNA is always single stranded. The mRNA is produced as a complementary copy of the DNA, which is involved in protein synthesis.

Transfer RNA is also known as soluble RNA (sRNA). The tRNA is a small molecule compared with other types of RNAs. It amounts to about 15 per cent of total RNA of the cell. The tRNA molecule performs a number of functions. The most important one is to act as a carrier of aminoacid to the site of protein synthesis. There are about more than 20 types of tRNAs. Each tRNA is specific for a particular amino acid. In bacterial cell, there are more than 70 tRNAs and in eukaryotic cells the number is even greater. There are four or five tRNAs specific for a particular amino acid and these are called isoacceptor tRNAs.

The tRNA has a cloverleaf like structure. It is synthesized in the nucleus on a small part of DNA. In 1965, R.W. Holley suggested the cloverleaf model of tRNA. Though tRNA molecule consists of a single strand, it assumes clover leaf like structure through folding. There are three folds in the clover leaf tRNA. It has four arms namely anticodon arm, D arm, T - C arm and aminoacid acceptor arm. The tRNA molecules are made up of 73 to 93 ribonucleotides. The acceptor arm carries an aminoacid. The anticodon arm has three anticodon nucleotides, which will join with the complementary codon in mRNA during protein synthesis i.e. three nucleotides in the tRNA pairs with three nucleotides of mRNA. In certain tRNAs in addition to these four arms an extra arm called variable arm occurs as shown in the figure. The aminoacid acceptor and the anticodon arms are oriented in opposite directions.