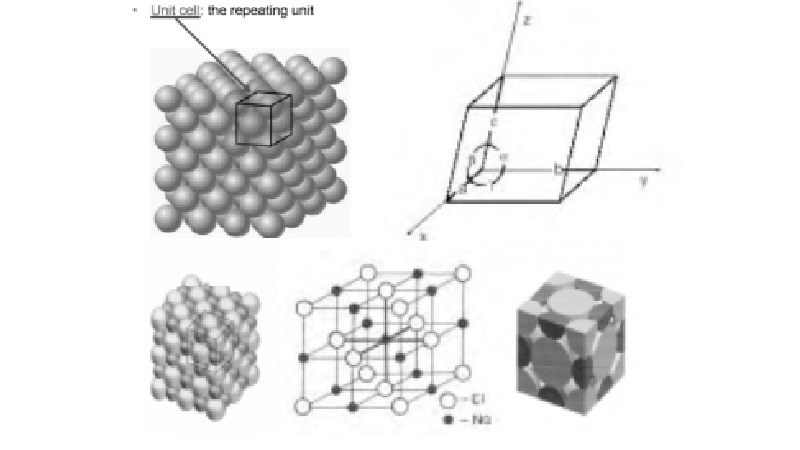 Crystals are built up of a regular arrangement of atoms or ions in three dimensions. The smallest structure of which the crystalline solid (or crystal) is built by its repetition in three dimensions is called as unit cell. A unit cell may be considered as the brick of a wall depends upon the shape of brick, the shape of crystal also depends upon the shape of unit cell. Therefore, a unit cell is the fundamental elementary pattern of a crystalline solid. The characterization of the crystal involves the identification of its unit cell.

3.     Primitives: The three sides a, b and c (as shown in figure ) of a unit cell are known as primitives or characteristic intercepts.

The unit cell is characterized by the distances a, b and c and angles a, b & g.

The size (edge length) of a unit cell depends on the size of the atoms or ions and their arrangement. Because a unit cell is representative of the entire structure, the ratio of ions in the unit cell is the same as the ratio in the overall structure.

Packing arrangement variations exist in each of the classes, yet here we will only explore the cubic system because it is the simplest. 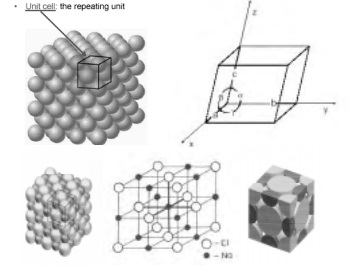 Three types of cubic unit cells are discussed in this chapter. Each unit cell is defined by one type of atom. Consequently, whichever atom you choose when defining that unit cell is the only atom used in defining the unit cell. (Ignore all other types.)

The most simple unit cell is known as a simple cubic unit cell. This is where one atom occupies each of the eight corners of a cube. The distance from atom to atom along the lattice is the same in every direction, and the angle between each of axes is 90 o .

The next unit cell is known as the body-centred cubic. In this form of crystal, there is an atom at each corner of the unit cell and also there is an additional atom in the center of the cube. This packing can fit more atoms into less space than the simple cubic unit cell.

Space lattice of sodium chloride is known to consist of a face-centered cubic lattice of Na+ ions interlocked with a similar lattice of Cl-ions. A unit cell of this combined lattice is shown in figure. This unit cell repeats itself in three dimensions throughout the entire crystal. The yellow spheres indicate chloride ions and red spheres represent sodium ions. The lattices are constituted entirely by ions are known as ionic lattices. All electrovalent compounds show such lattices.

No. of Sodium ions

No. of Chloride ions

Thus, number of NaCl units per unit cell is 4.

The cesium chloride, CsCl, structure has body-centred cubic system and is shown in figure. The body-centred cubic arrangement of atoms is not a close packed structure. There is one molecule per primitive cell, with atoms at the corners (000) and body-centred positions 1/2 1/2 1/2 of the simple cubic space lattice.

1. The Cl- ions are at the corners of a cube where as Cs+ ion is at the centre of the cube or vice versa

Thus number of CsCl units per unit cell is 1.