Atomic radius is the distance from the centre of the nucleus to the point  where the electron density is effectively zero.

The value of Cl-Cl bond distance as found experimentally is 1.98Ĺ. Thus

The value of d(C-C) distance as found experimentally in a variety of saturated  hydrocarbons is 1.54Ĺ.

r(A) and r(B) are the covalent radii of A and B atoms.

The experimental values of covalent bond length for some common homonuclear diatomic molecules are given below.

Pauling has calculated the radii of the ions on the basis of the observed internuclear distances in four crystals namely NaF, KCl, RbBr and CsI. In each ionic crystal the cations and anions are isoelectronic with inert gas configuration.

Further the following two assumptions are made to assign the ionic radii.

with each other and hence the sum of their radii will be equal to the inter nuclear distance between them.

ii) For a given noble gas configuration, the radius of an ion is inversely proportional to its effective nuclear charge. i.e.

be calculated by using Slater's rules. According to these rules the value of "S" for a given electron is estimated as follows.

i) Write down the complete electronic configuration of the element and divide the electrons into the following orbital groups starting from the inside of the atom.

ii) Select the electron for which the value of S is to be calculated. For this calculation add up the contributions to S for the other electrons according to the following rules.

Contribution to S for each electron of this type 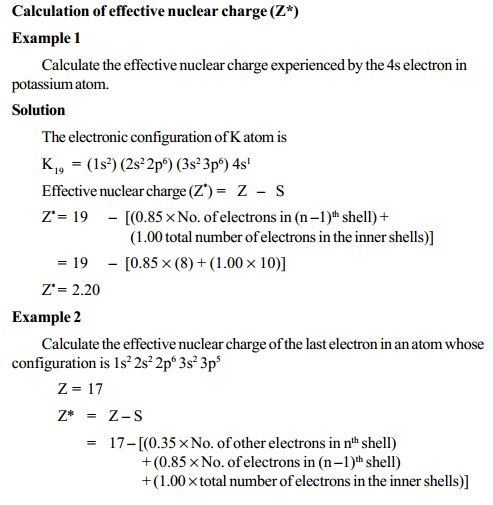 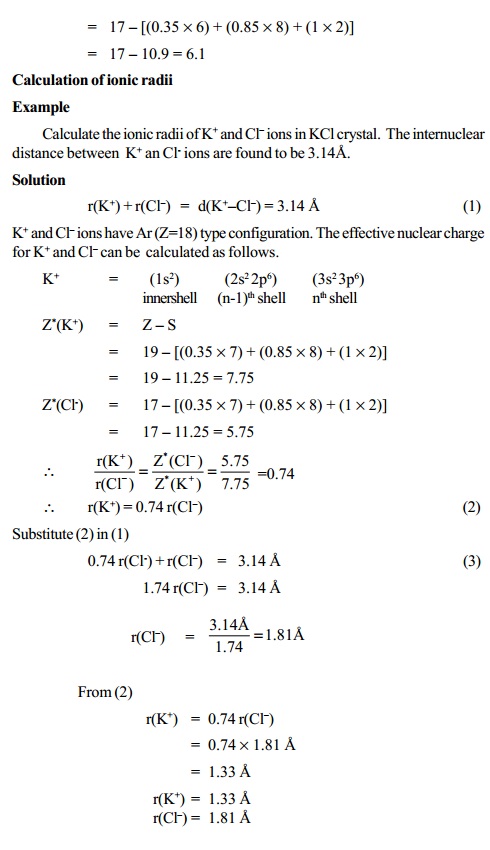 Ionisation energy of an element is defined as the amount of energy required to remove the most loosely bound electron from isolated neutral gaseous atom in its lowest energy state. The process is represented as

per mole (kcal/mole) or kilo joules per mole (kJ/mole).

In addition to first ionisation potential (I1) defined above, second, third. etc.

Similarly, third ionisation potential (I3) is the energy required to remove still one more electron from M2+(g) cation to get M3+(g) cation, i.e.

Each successive ionization potential or energy is greater than the previous one, since the electron must be removed against the net positive charge on the ion.