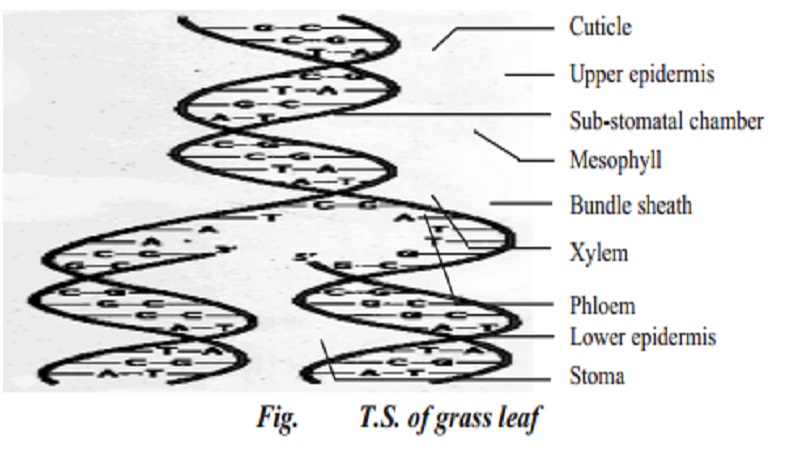 A transverse section of a grass leaf reveals the following internal structures. Epidermis : The leaf has upper and lower epidermis.They are made up of a single layer of thin walled cells. The outer walls are covered by thick cuticle. The number of stomata is more or less equal on both the epidermis.

The leaf has upper and lower epidermis.They are made up of a single layer of thin walled cells. The outer walls are covered by thick cuticle. The number of stomata is more or less equal on both the epidermis. The stomata are surrounded by dumb-bell shaped guard cells. The guard cells contain chloroplasts, whereas the other epidermal cells do not have them. Some special cells bound the guard cells. They are distinct from other epidermal cells. These cells are called subsidiary cells or accessory cells. Some cells of upper epidermis are large and thin walled. They are called bulliform

cells or motor cells. These cells are helpful for the rolling and unrolling of the leaf according to the weather change. Some of the epidermal cells of the grass are filled with silica. They are called silica cells.

The ground tissue that is present between the upper and lower epidermis of the leaf is called mesophyll. Here, the mesophyll is not differentiated into palisade and spongy parenchyma. All the mesophyll cells are nearly isodiametric and thin walled. It is for this reason, the grass leaf is described as isobilateral. These cells are compactly arranged with limited intercellular spaces. They contain numerous chloroplasts.