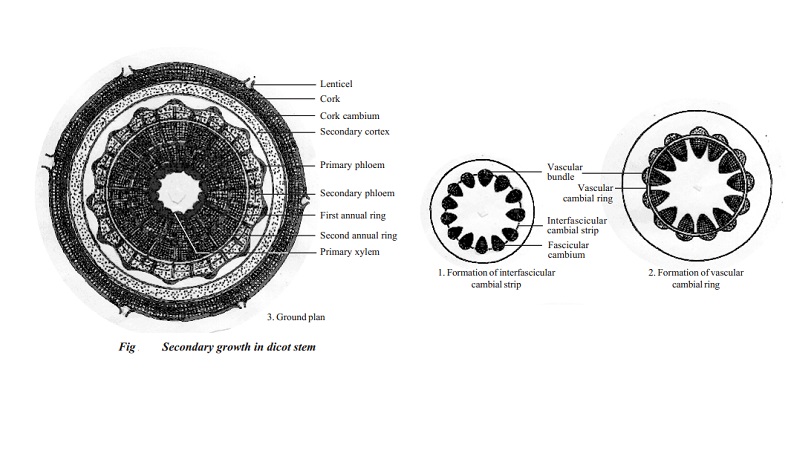 Thus the increase in thickness, due to the addition of secondary tissues by the activity of vascular cambium and phellogen in the stelar and cortical regions is called secondary growth. The process and the structures associated with the secondary growth in dicot stems are given below: 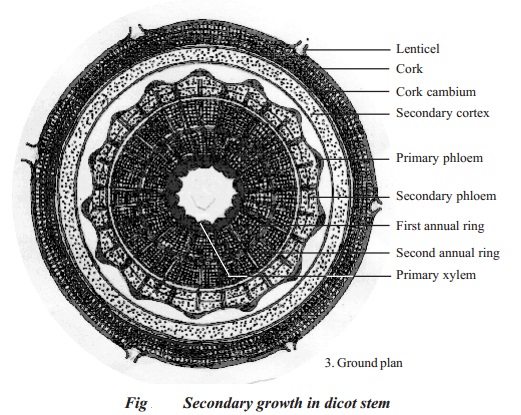 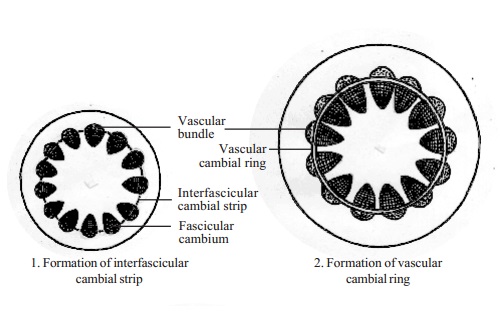 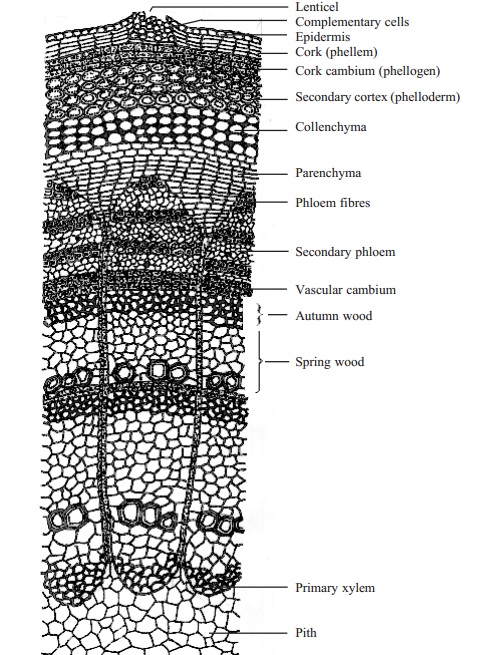 As secondary vascular tissues are continuously added in the stelar region, pressure is exerted on the cortex and epidermis. So the epidermis gets ruptured and the cortex stretched. Then the secondary protective layer is developed. It is called periderm.

During the formation of this periderm, a few layers of meristematic tissue are formed in the cortex. This is called cork cambium or phellogen. The cells of the cork cambium cut off cells on both the sides. Those formed on the outerside become suberised. This region is called cork or phellem. The cork cells are uniform in size and arranged in radial rows without intercellular spaces. These cells are dead at maturity. The cells that are cut off on the inner side of the cork cambium are parenchymatous.

This region is called phelloderm or secondary cortex. The cells of the phelloderm are living, isodiametric and radially arranged with intercellular spaces. As these cells have chloroplasts, they carry out photosynthesis. Their cell walls are made up of cellulose. 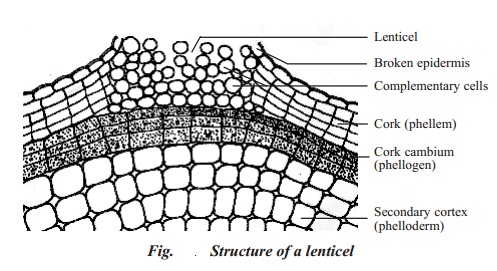 Lenticels are the lense shaped openings or breaks in the cork tissue. They are formed due to the rupture in the epidermal layers during the secondary growth in stems. They appear as small protrusions on the stem. Lenticels are usually formed below the stomata or sometimes at any region under the epidermis. Phellogen is more active in the region of lenticels than elsewhere and thus forms a mass of loosely arranged thin walled

parenchymatous cells called complementary cells. Lenticels are useful in exchange of gases. Lenticels remain scattered or arranged in the longitudinal or vertical rows.

During the spring and the summer seasons vegetative growth of a tree is induced and more leaves are produced. So there is a dire need of efficient transport of water and mineral salts. So the vessels produced during these seasons are larger and wider than those produced in the winter and the autumn seasons. Xylem elements of spring wood are larger, thin-walled and lighter in colour. On the otherhand, during the winter and the autumn seasons less amount of xylem elements is produced. These xylem elements are smaller, thick-walled and darker in colour. The xylem (wood) formed during the spring and the summer is called early wood or spring wood and that produced during the winter and the autumn is called late wood or autumn wood. These two kinds of wood appear together as a concentric ring called annual ring or growth ring.

Each annual ring refers to one year's growth. By counting the total number of annual rings, the age of the plant can approximately be calculated. The determination of the age of a tree by counting the annual rings is called Dendrocronology. The section taken at the base of the trunk of American Sequoia dendron has revealed that the tree is about 3500 years old.

In many dicot plants, the lumens of the xylem vessels are blocked by many balloon like in-growths from the neighbouring parenchymatous cells. These balloon like structures are called tyloses.

The sapwood is useful in the conduction of water. As vessels of the heartwood is blocked by tyloses, water is not conducted through them. The tyloses contain oils, gums, tannins, resins and other coloured substances. Due to the presence of these substances, the heartwood becomes the hardest part of the wood. From economic point of view the heartwood is more useful than sapwood. The timbers from the heartwood are more durable and more resistant to the attack of microorganisms and insects than those from sapwood.