Vitamins are a chemically diverse group of organic substances that are either not synthesized by organisms or are synthesized at rates insufficient to meet the organisms’ needs.

Vitamins are a chemically diverse group of organic substances that are either not synthesized by organisms or are synthesized at rates insufficient to meet the organisms’ needs. They constitute only a minute fraction of the diet and are more catalytic in their function, but are critical for the maintenance of normal metabolic and physicological functions. They can be classified into two groups: water-soluble and fat-soluble vitamins. Water-soluble vitamins include eight members of the vitamin B complex:thiamin,riboflavin,pyridoxine,pantothenic acid, niacin, biotin, folic acid and vitamin B12. They include the essential nutritional factors choline, inositol and ascorbic acid, and vitamins with less-defined activities for fish: p-aminobenzoic acid,lipoic acid and citrin.The fat-soluble group comprises vitamins A,D,E and K.

The information available on vitamin nutrition of aquatic animals is limited. The leaching of water-soluble vitamins from test diets, before the animals feed on them has been a major problem in determining their requirements. This is more so in the case of crustaceans because of their slow feeding habits, and in the case of molluscs because they feed on algae and other natural food. Much of the available information is based on the work done on salmonids, but some data are also available for a few other species, and these are presented in Table 7.6. If natural food organisms are available to cultured animals, as in extensive pond culture, prepared feed may not need any vitamin supplements. On the contrary, in intensive farming, where natural food items do not contribute much to dietary intake, the addition of adequate quantities of vitamins will be essential. Insufficient information often makes it difficult to decide with precision the quantities which should be added. Hypervitaminosis is rare in fish, although it is possible at very high levels (for example excess vitamin A causes enlargement of liver and spleen, abnormal growth and bone formation and epithelial keritonization), particularly with the fatsoluble

vitamins. Generally, vitamin levels in prepared feeds are sufficiently high that even with processing, storage and leaching losses the remaining levels meet requirements.

The deficiency symptoms for most of the water-soluble vitamins have been described(Halver, 1979) (Table 7.7). The symptomatic results of these deficiencies were observed in fish that had been grown on test diets devoid of an individual vitamin. The functions of these vitamins are also beginning to be understood. For example, thiamin deficiency produces char- 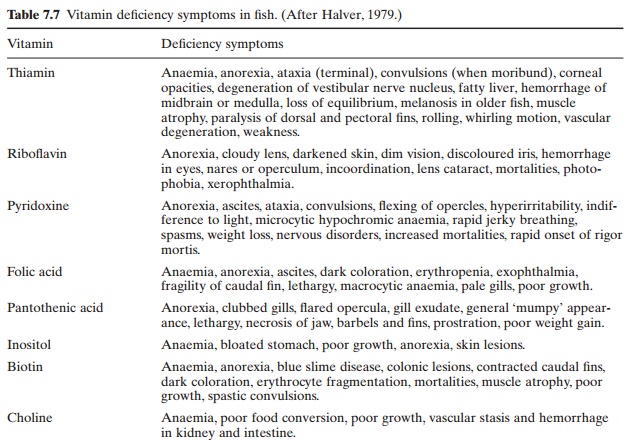 acteristic symptoms, including nervous system damage. As thiamin is involved in carbohydrate metabolism, thiamin needs were expected to be correlated with dietary levels of carbohydrates, and this has been shown to be so in common carp. Riboflavin also has a variety of coenzyme functions in carbohydrate metabolism, and its absence from the diet produces symptoms generally associated with the eye. Dietary deficiencies of folacin and vitamin B12 in fish are expressed as anaemias. Folic acid primarily functions in purine synthesis, and deficient purine synthesis strikes most directly at nucle-oprotein production in blood cell formation, causing a macrocytic, normochromic anaemia. Severe choline deficiency impairs lipid metabolism and leads to fatty livers. Choline is usually needed in much larger amounts than water-soluble vitamins, because of its role in phos-pholipid synthesis needed for cell membrane structure. Myoinositol is also required in larger amounts, as it is also probably needed as a constituent of phospholipids. Vitamin C deficiencies in fish often cause spinal deformities and slow wound repair, because of slow collagen formation.

As has been pointed out earlier, there is very little definite information available at present on vitamin requirements of crustaceans and molluscs. Even where requirements have been demonstrated, the deficiency symptoms have been defined only as reduced growth. No evidence has been found to show the physiological role of any of the fat-soluble vitamins by crustaceans. A dietary sourceof thiamin and pyridoxine, as well as inositol, has been shown to promote growth in Penaeusjaponicus. Similarly, choline also appears to benecessary for improved growth and survival. The American lobster (Homarus americanus) has an apparent requirement for choline. Lack of choline-containing phospholipids results in a characteristic deficiency syndrome, in which juvenile mortalities are associated with unsuccessful molts (D’Abramo et al., 1981a,b).