Ingested proteins are first split into smaller fragments by pepsin or by trypsin or chy-motrypsin from the pancreas in fish.

Ingested proteins are first split into smaller fragments by pepsin or by trypsin or chy-motrypsin from the pancreas in fish. These pep-tides are then further reduced by the action of carboxypeptidase and amino peptidase, which hydrolyses off one amino acid at a time, beginning at each end of the polypeptide chain. The free amino acids released into the digestive system are then absorbed through the walls of the gastro-intestinal tract into the bloodstream, where they are then resynthesized into new tissue proteins, catabolysed for energy or frag-mented for further tissue metabolism.

Amino acids are described as the building blocks of proteins, and about 23 of them have been isolated from natural proteins.Ten of theseamino acids are considered indispensable for fish, crustaceans and molluscs; these are arginine, histidine, isoleucine, leucine, lysine, methionine, phenylalanine, threonine, tryptophan and valine. Alanine, aspartic acid, cystine, glutamic acid, glycine, proline, serine and tyrosine are considered the non-essential amino acids, at least in the case of trout and channel catfish. In the case of molluscs, such as mussels, proline may be essential. While the type of amino acids required are similar to those of other animals, the quantity required is much higher. 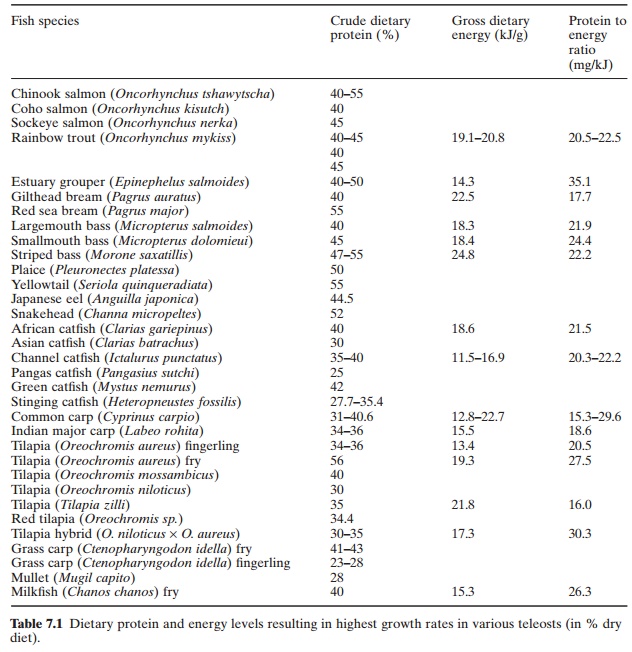 Several investigations have shown the potential for supplementing amino-acid-deficient proteins with limiting amino acids in diets for salmonids. Casein supplemented with six amino acids gave feed conversion ratios similar to isolated fish proteins as a dietary source in Atlantic salmon. It was demonstrated that soybean meal supplemented with five or more amino acids, including methionine and lysine, was a superior protein source to soybean meal alone, for rainbow trout. However, this does not appear to be the case with young carp and channel catfish. Generally speaking, diets containing fish meal, meat and bone meal, yeast and soybean can be improved by supplementing with cystine (10 g/kg) and tryptophan (5g/kg) together. It is reported that fish meal can be entirely replaced, without reduction in food conversion rate, in diets for rainbow trout by a mixture of poultry by-product meal and feathermeal together with 17 g lysine HLC/kg, 4.8 g DL-methionine/kg and 1.44 g DL-tryptophan/kg. 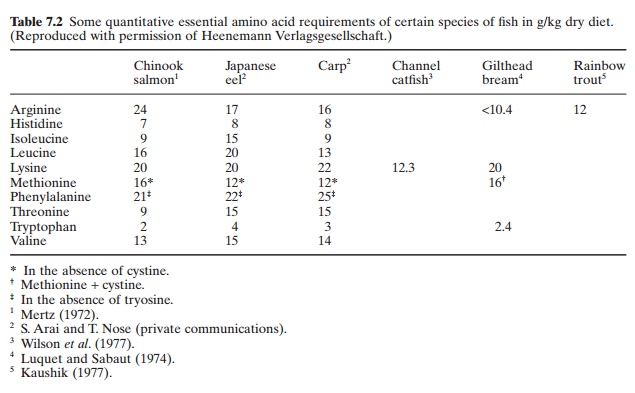 The amino acid requirements of fishes and crustaceans as a percentage of dietary protein have been shown to be closely linked with their relative proportions in their muscle tissue, as in other aquatic organisms (Wilson and Poe, 1985; Abramo and New, 2000). Potential quality of a dietary protein source can be judged from the amino acid profile, which can be compared with an evaluative index. D’Abramo (1998) termed it the A/E index, which is a proportion of each essential amino acid (A) to the total essential amino acids (E). The A/E indices of tail muscle and whole body tissue of juvenile Machro-brachium rosenbergii seem to have close similarities to those of shrimps (Penaeus monodon and P. japonicus). D’Abramo and New (2000) observed that if one or more dietary A/E ratios are markedly different from those of the tissues, the consequent dietary imbalance is likely to cause a reduction in growth.The amino acid requirements of freshwater prawns are apparently similar to those of other crustaceans and fishes (D’Abramo and New, 2000).

The absolute amino acid requirements of crustaceans have yet to be defined. Table 7.4 presents the amino acid composition of commonly used proteins in crustacean purified diets. It is, however, to be remembered that processing and digestibility affect their actual availability to the animals. 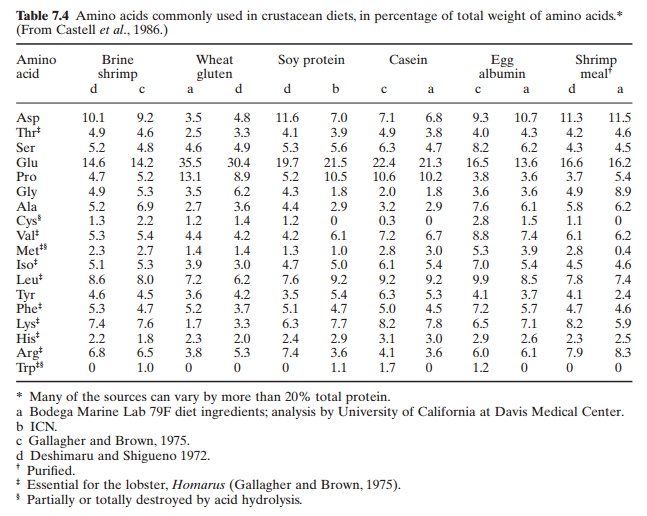