Minerals are required by all animals, either in their elemental form or incorporated into specific compounds, for various biological functions such as the formation of skeletal tissue, respiration, digestion and osmoregulation.

Minerals are required by all animals, either in their elemental form or incorporated into specific compounds, for various biological functions such as the formation of skeletal tissue, respiration, digestion and osmoregulation. Of the 26 naturally occurring essential elements described for animals, only nine have been shown to be required by finfish. Very little is known of the mineral requirements of crus-taceans and molluscs. One of the main difficulties in determining the quantitative mineral requirements of aquatic animals is their ability to absorb inorganic elements from their external environment in addition to their diets.

Since water generally contains an abundance of minerals, supplementation of diets may not be necessary, except in the case of those that are required in relatively high concentrations, especially in fresh-water fish. The available information on the mineral requirements of fish is summarized in Table 7.8 and information on deficiency symptoms in Table 7.9. 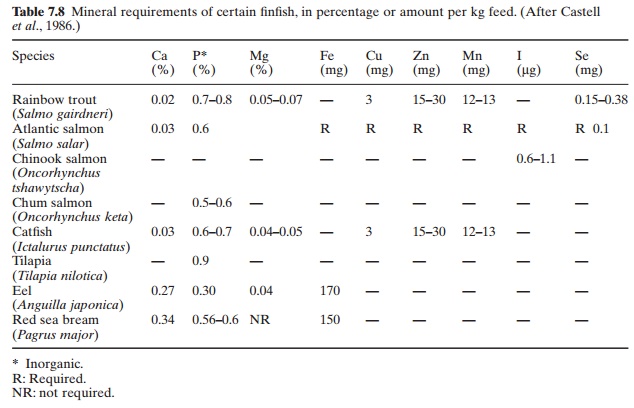 Calcium and phosphorus are closely related in metabolism, especially in bone formation and the maintenance of acid-base equilibrium. While fish can obtain calcium from food and also from the environment through gills and fins in fresh water, phosphorus has to come mainly from food, as both fresh and salt waters are generally deficient in phosphates. Almost the entire store of calcium (99 per cent) and most of the phosphorus (80 per cent) in the body of fish are in the bones, teeth and scales.

The remaining small portions are widely distributed throughout the organs and tissues. Calcium is present in body fluids in non-diffusible form bound to protein and in a diffusible fraction largely as phosphate and bicarbonate compounds. It is this diffusible fraction that is of significance in calcium phosphorus nutrition (Chow and Schell, 1980). Ionized calcium in the extracellular fluids and in the circulatory system participates in muscle activity and osmoregulation. Phosphorus combinations with proteins, lipids, sugars, nucleic acids and other compounds are vital exchange currencies in life processes, and are distributed throughout the organs and tissues.

Among the feed ingredients in common use, fish meal is rich in both calcium and phosphorus. However, feedstuffs of plant origin usually lack calcium, and phosphorus, though abun-dant, occurs predominantly in the form of phytin or phytic acid, which are generally not readily absorbed.

Magnesium is closely associated with calcium and phosphorus in distribution and metabolic activities. While the bulk of the magnesium is stored in the skeleton, the rest (40 per cent) is distributed throughout the organs and muscle tissues and extracellular fluids. This fraction plays a vital role in enzyme co-factors and as an important structural component of cell membranes.

Among the trace elements of importance in fish nutrition, mention has to be made of cobalt.Studies made in the USSR seem to indicate that addition of cobalt chloride and/or cobalt nitrate to the feed, or the addition of cobalt chloride to the water of fish ponds, enhances growth and haemoglobin formation in common carp. Cobalt probably satisfies the requirement of bacteria that synthesize vitamin B12, which the fish can utilize.

As mentioned earlier, there is very limited information available on mineral requirements and deficiency symptoms in crustaceans and molluscs. It was reported that the best growth of Penaeus japonicus was obtained with diets containing 1.04 per cent phosphorus and 1.24 per cent calcium (Kitabayashi et al., 1971). Other research (Deshimaru and Yone, 1978) showed that 2 per cent phosphorus, 1 per cent potassium and 0.2 per cent trace element supplementation in a purified diet are essential for maximum growth of this species and that calcium, magnesium and iron supplementation are not essential. The best growth and survival of the American lobster (Homarus americanus) was achieved with a diet containing a Ca/P ratio of 0.51 (0.56 per cent calcium and 1.1 per cent phosphorus) (Gallagher et al., 1978).