Most of the feed ingredients used in animal feed manufacture are believed to be potential ingredients for aquaculture feeds.

Most of the feed ingredients used in animal feed manufacture are believed to be potential ingredients for aquaculture feeds. The International Network of Feed Information has descriptions of over 18 000 feed ingredients (Harris, 1980). Göhl (1980) has compiled information on the nutritive value of tropical feed-stuffs used for animal feeding which are of importance to developing countries. Only a few of these feedstuffs have so far been evaluated as ingredients for aquaculture feeds and so only a much smaller number are presently used in formulations. These materials include feed grains, oil cakes and meals, animal by-products including fish meal and a number of agricultural waste products. As has been indicated earlier, the quality of any one of these feed materials varies between and within countries and regions. Therefore it becomes necessary to determine the composition of ingredients from each source for formulation of diets. The available information on the composition of a number of common ingredients has been published by FAO/UNDP (1983). Some of these are utilized as supplementary feeds, without any processing.

Based on experience in feed formulation of salmonids, fish meal has become a major constituent of most aquaculture diets, especially of carnivorous species. Because of the relatively high cost of the product and shortage of supplies, substitutes have been explored. Other animal proteins, such as feather meal and blood

meal, have unique patterns in essential amino acid composition. So, they have to be used in combination with other protein sources to balance the amino acid composition. It is reported that fish meal in a standard diet (70 per cent) for rainbow trout could be entirely replaced by a mixture of poultry by-product meal and feather meal on an isonitrogenous basis, if the lacking amino acids were supplemented in isolated form. Tiews et al. (1976) found that one-quarter of the fish meal protein could be substituted with methionine or with a mixture of meat and bone meal and blood meal, with the remaining dietary protein coming from poultry by-product and feather meal.

Among the plant protein sources, soybean meal is probably one of the most commonly used ingredients in fish feed. Enrichment with limiting amino acids greatly improves its nutritive value. Up to about one-quarter of the fish meal in trout feeds can be replaced by soybean meal, if it is enriched with methionine.

Another protein source studied as a replacement for fish meal is single cell protein (SCP) such as alkane yeast, methanol yeast, ethanol yeast, etc. These yeasts can be included in rainbow trout and eel feeds, as replacements for fish meal on an isonitrogenous basis, to a level of about 30 per cent, without any significant adverse effect on growth. A combination of these yeasts with fish meal was found to be superior to fish meal alone in carp diets. The importance of microalgae as a protein source has been referred. Although methods of large-scale production are not perfected, these algae can be grown in moderate quantities. When dried, they are non-toxic and can provide all the protein needed for aquaculture species. Lysine supplement may be needed for Chlorella and methionine of Scenedesmus and Spirulina. Some experiments have been carried out on the dietary use of bacterial proteins (for example, Methanomonas spp.), which have high protein contents, with encouraging results.

Leaf protein concentrate (LPC) is another source of protein for aquaculture feeds. Juices extracted from the fleshy parts of plants are heated to coagulate the proteins and then dried. Even though the protein content may be lower than some other sources, such as soybean meal, the quality of the protein is generally

higher. In certain plants (as for example those belonging to Leucaena and Mimosa), LPC may contain toxic substances, but it is presumed that LPC from alfalfa and other legumes can be used safely. The LPC from rye grass at levels up to 48 per cent of total dietary protein has been successfully tested on carp and trout (Ogino etal., 1978).

By-catches from fishing industries are a major raw material for fish meal manufacture and have been used directly as feed for cultured fish. Fresh trash fish has a high feed value and is superior to fish meal in protein content and quality. When mixed and properly processed with less expensive ingredients like rice bran and supplemented with vitamins, trash fish forms an excellent feed in aquaculture. However, special care has to be taken in the dispensation of the feed to avoid deterioration of the water quality. As trash fish is likely to deteriorate and lose nutrients if not used when fresh, it will be necessary to freeze it for later use. Trash fish should be pasteurized before use to prevent the recycling of fish diseases.

The cost of preserving and processing trash fish can be reduced by the use of fish silage, which is now becoming common in some countries such as Norway. Fish silage is made by adding 3–4 per cent of an acid to the fresh fish, preferably minced. Organic or inorganic acids can be used. Formic acid is commonly used, but sulphuric or propionic acid can also be used. The pH of the mixture is brought down below 4 and this inhibits bacterial decay. The enzymes in the minced fish continue to act and reduce the mixture to a slurry. An antioxidant is added to prevent the fats becoming rancid and the liquid can then be stored in tanks for up to six months. When properly prepared, fish silage contains practically all the nutrients of the raw fish. For feeding fish, the silage is mixed in equal proportions with a commercial feed meal containing vitamins and a binding agent, and is passed through a simple perforated extruder to produce moist pellets. If the content of low melting point fats in the mixture is low, fish oil can be added in required quantities before extrusion.

Though considerable importance is given to protein content in selecting ingredients for aquaculture feeds (not only because of its role in fish nutrition, but also because of its high cost), the need for lipids has also to be taken

into full consideration. As described, fish and other aquaculture animals have a relatively high requirement for lipids to serve as a source for polyunsaturated fatty acids (PUFA) and as an energy source. Besides improving the overall digestibility of diets, they also help in smoothing the pelleting process and reduce dustiness in milling. Animal and vegetable fats, as well as soap stocks, are readily available to feed manufacturers. Fish oils and most raw vegetable fats have a high degree of unsaturation. The PUFA content of fats from a number of animal and plant sources is given in Table 7.21. According to the lipid content of the other ingredients in the diet, the need for the addition of fats to achieve essential PUFA levels can be determined.

Where supplementation of vitamins is necessary, commercially available vitamin premixes may be used or the necessary premixes may be prepared using suitable diluents or ingredients with high vitamin contents. Algal meal and brewers yeast are excellent sources of vitamins. Commercially available vitamin premixes are usually meant for terrestrial animals. Table 7.22 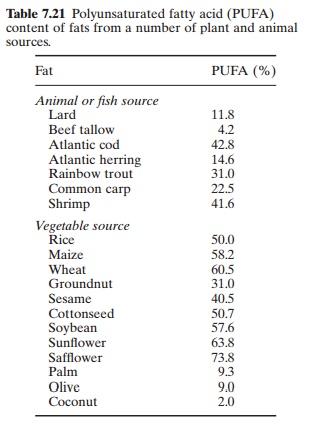 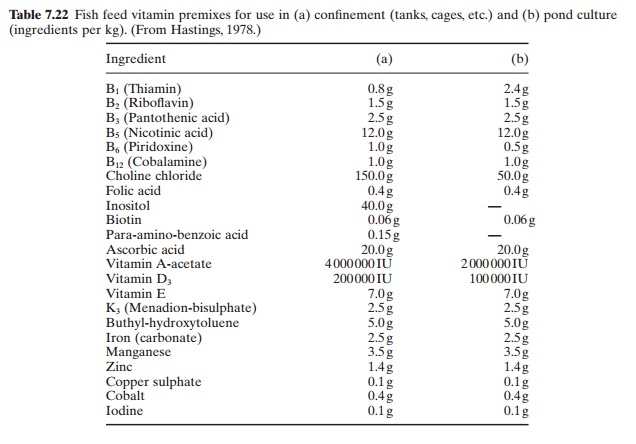 gives the composition of vitamin premixes made specifically for fish feeds (Hastings, 1979). Table 7.23 lists sources of minerals that could be used as supplements to diets (Harris, 1980). Mineral premixes are also commercially available. 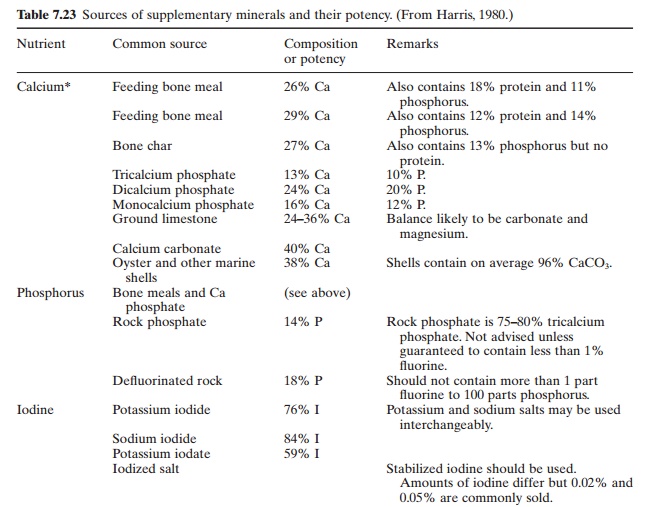