Aquaculture animals have to obtain all their nutritional requirements, except for part of the mineral requirement, through the foods they consume.

Nature and source of live foods

Aquaculture animals have to obtain all their nutritional requirements, except for part of the mineral requirement, through the foods they consume. In nature, most of them subsist on live foods consisting of plants and animals obtained from the environment, but some do ingest and possibly utilize detritus along with associated organisms. As mentioned, these foods are generally rich in essential nutrients. Table 7.10 gives an example of the nutrient composition of algal pastures grown in milkfish ponds in brackish-water ponds, where culture is largely based on natural foods. There is a difference of opinion on the food value of bacteria, although fair quantities can be found in the alimentary tract of aquaculture species, particularly in detritus and periphyton feeders. Experience in aquaculture seems to show that most adult finfish and crustaceans can be weaned to accept inert foods, even though there are advantages in providing some live food. But larval stages of many of these species have to depend entirely on live food. The initial source of food for many larval organisms is phytoplankton. This is probably associated with the size of the larvae at hatching. After a certain period of time, the larvae of most species, except molluscs, can be fed exclusively on zooplankton or other animal species, or a combination of plant and animal matter. 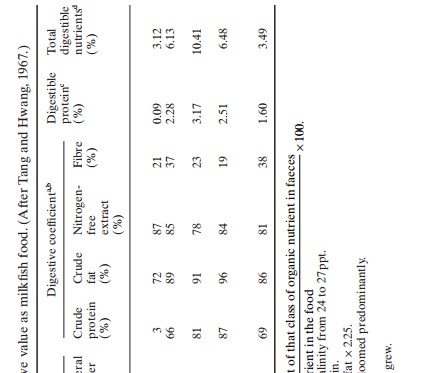 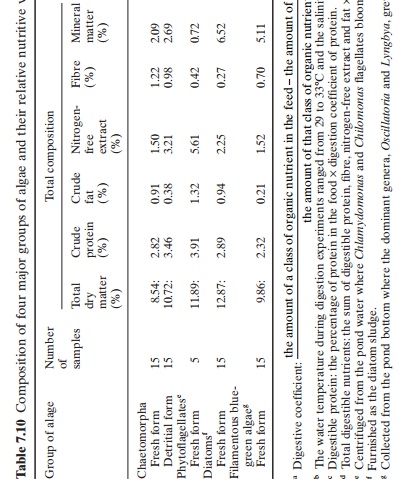 It is possible to obtain both types of food from nature, but it will be more convenient to culture algae under controlled conditions for hatchery use. In nursery and grow-out ponds, they are generally produced as a result of the biological cycle initiated by mineral nutrients in solution. Using the sun’s heat and light they transform the inorganic matter and carbonic acid in solution into organic matter, in the form of vegetable tissues consisting of plankton and periphyton. Of particular interest in pond culture of bottom-feeding fish is the production of benthic algal complexes which also include animal species and bacteria associated with detritus.

Light penetration is an important factor in photosynthesis and, therefore, in the growth of aquatic algae and macrophytes. Since aquaculture is generally done in shallow waters, the light intensity at the bottom usually exceeds 1 per cent incident, which is the accepted compensation depth for aquatic plants. Even on ponds with highly turbid water, some photo-synthetic activity takes place which is further enhanced by water circulation.

Among the major nutrients required by plants are phosphorus and nitrogen, primarily

PO4 and NO3. Nitrogen is removed from water as nitrates (NO3) by plants. Nitrogenous wastes are excreted by animals and nitrogenous compounds are released during the bacteriological decomposition of plant and animal matter. They are eventually transformed into ammonia, which undergoes nitrification to nitrate through a nitrite (NO2) as a result of the action of aerobic bacteria. Phosphorus is an important major nutrient because it plays a key role in photosynthesis and intermediary metabolism and forms a constituent of nucleic acid and proteins. Available carbon is also of major importance as its deficiency is reflected in decreased production. The ratio of carbon: nitrogen : phosphorus required by most species of phytoplankton is about 106 : 16 : 1.