Virtualization is a powerful tool for trusted system designers because it allows users to access complex objects in a carefully controlled manner.

Virtualization is a powerful tool for trusted system designers because it allows users to access complex objects in a carefully controlled manner. By virtualization we mean that the operating system emulates or simulates a collection of a computer system's resources. We say that a virtual machine is a collection of real or simulated hardware facilities: a [central] processor that runs an instruction set, an amount of directly addressable storage, and some I/O devices. These facilities support the execution of programs.

Obviously, virtual resources must be supported by real hardware or software, but the real resources do not have to be the same as the simulated ones. There are many examples of this type of simulation. For instance, printers are often simulated on direct access devices for sharing in multiuser environments. Several small disks can be simulated with one large one. With demand paging, some noncontiguous memory can support a much larger contiguous virtual memory space. And it is common even on PCs to simulate space on slower disks with faster memory. In these ways, the operating system provides the virtual resource to the user, while the security kernel precisely controls user accesses.

The IBM MVS/ESA operating system uses virtualization to provide logical separation that gives the user the impression of physical separation. IBM MVS/ESA is a paging system such that each user's logical address space is separated from that of other users by the page mapping mechanism. Additionally, MVS/ESA includes the operating system in each user's logical address space, so a user runs on what seems to be a complete, separate machine. 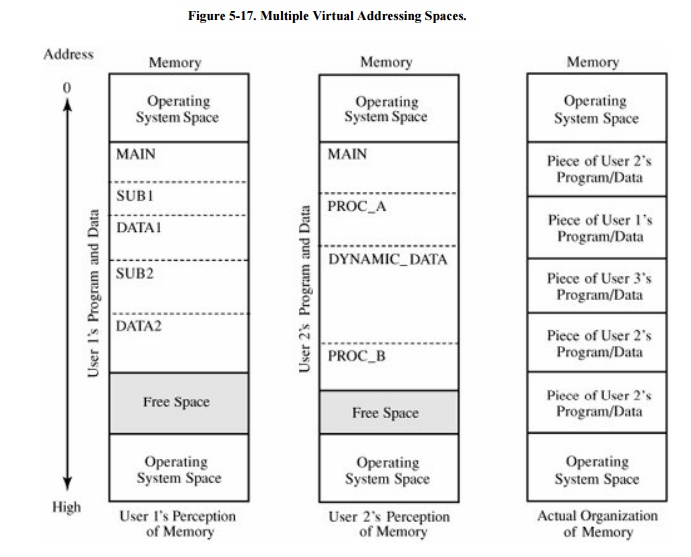 A primary advantage of MVS/ESA is memory management. Each user's virtual memory space can be as large as total addressable memory, in excess of 16 million bytes. And protection is a second advantage of this representation of memory. Because each user's logical address space includes the operating system, the user's perception is of running on a separate machine, which could even be true.

The IBM Processor Resources/System Manager (PR/SM) system provides a level of protection that is stronger still. A conventional operating system has hardware facilities and devices that are under the direct control of the operating system, as shown in Figure 5-18. PR/SM provides an entire virtual machine to each user, so that each user not only has logical memory but also has logical I/O devices, logical files, and other logical resources. PR/SM performs this feat by strictly separating resources. (The PR/SM system is not a conventional operating system, as we see later in this chapter.) 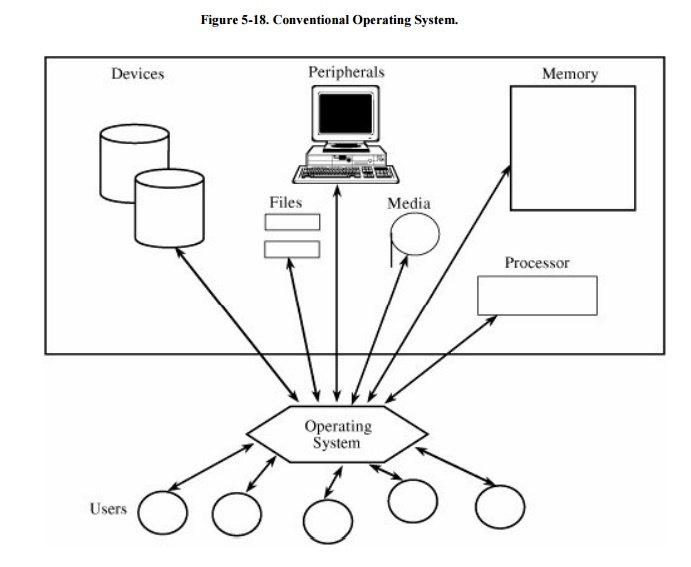 The PR/SM system is a natural extension of the concept of virtual memory. Virtual memory gives the user a memory space that is logically separated from real memory; a virtual memory space is usually larger than real memory, as well. A virtual machine gives the user a full set of hardware features; that is, a complete machine that may be substantially different from the real machine. These virtual hardware resources are also logically separated from those of other users. The relationship of virtual machines to real ones is shown in Figure 5-19. 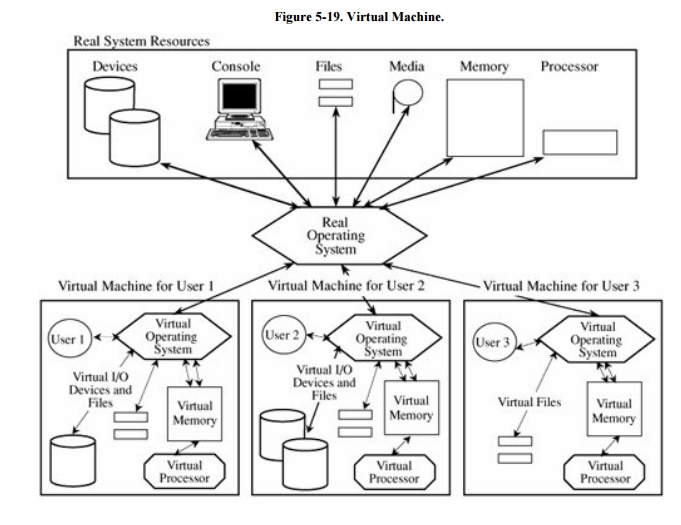 Both MVS/ESA and PR/SM improve the isolation of each user from other users and from the hardware of the system. Of course, this added complexity increases the overhead incurred with these levels of translation and protection. In the next section we study alternative designs that reduce the complexity of providing security in an operating system.