We begin our study of security policy by examining military security policy because it has been the basis of much trusted operating system development and is fairly easy to state precisely. Then, we move to security policies that commercial establishments might adopt. 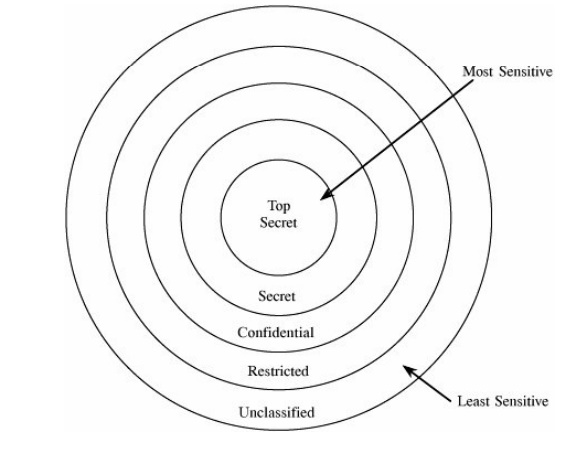 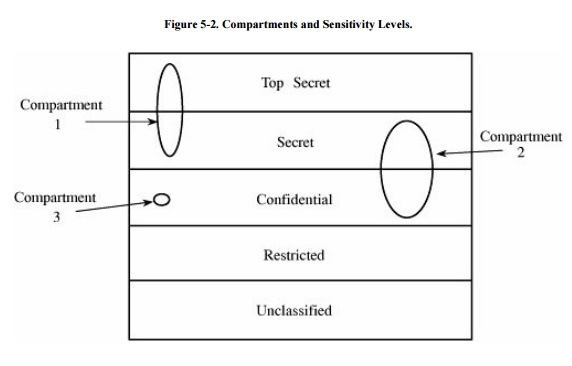 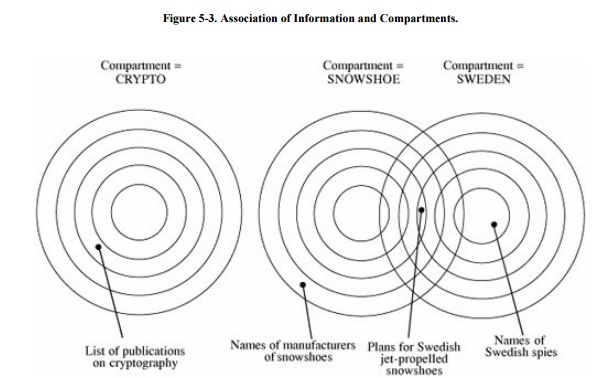 The combination <rank; compartments> is called the class or classification of a piece of information. By designating information in this way, we can enforce need-to-know both by security level and by topic.

·      the subject has a need to know about all compartments for which the information is classified These conditions are equivalent to saying that the subject dominates the object.

Commercial enterprises have significant security concerns. They worry that industrial espionage will reveal information to competitors about new products under development. Likewise, corporations are often eager to protect information about the details of corporate finance. So even though the commercial world is usually less rigidly and less hierarchically structured than the military world, we still find many of the same concepts in commercial security policies. For example, a large organization, such as a corporation or a university, may be divided into groups or departments, each responsible for a number of disjoint projects. There may also be some corporate-level responsibilities, such as accounting and personnel activities. Data items at any level may have different degrees of sensitivity, such as public, proprietary, or internal; here, the names may vary among organizations, and no universal hierarchy applies.

Let us assume that public information is less sensitive than proprietary, which in turn is less sensitive than internal. Projects and departments tend to be fairly well separated, with some overlap as people work on two or more projects. Corporate-level responsibilities tend to overlie projects and departments, as people throughout the corporation may need accounting or personnel data. However, even corporate data may have degrees of sensitivity. Projects themselves may introduce a degree of sensitivity: Staff members on project old-standby have no need to know about project new-product, while staff members on new-product may have access to all data on old-standby. For these reasons, a commercial layout of data might look like Figure 5-4. 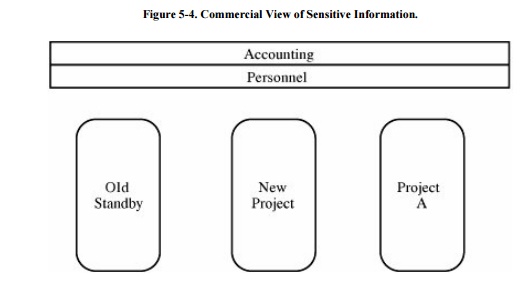 Two significant differences exist between commercial and military information security. First, outside the military, there is usually no formalized notion of clearances: A person working on a commercial project does not require approval for project MARS access by a central security officer. Typically, an employee is not conferred a different degree of trust by being allowed access to internal data. Second, because there is no formal concept of a clearance, the rules for allowing access are less regularized. For example, if a senior manager decides that a person needs access to a piece of MARS internal data, the manager will instruct someone to allow the access, either one-time or continuing. Thus, there is no dominance function for most commercial information access because there is no formal concept of a commercial clearance.

So far, much of our discussion has focused only on read access, which addresses confidentiality in security. In fact, this narrow view holds true for much of the existing work in computer security. However, integrity and availability are at least as important as confidentiality in many instances. Policies for integrity and availability are significantly less well formulated than those for confidentiality, in both military and commercial realms. In the two examples that follow, we explore some instances of integrity concerns.

In many commercial applications, integrity can be at least as important as confidentiality. The correctness of accounting records, the accuracy of legal work, and the proper timing of medical treatments are the essence of their fields. Clark and Wilson [CLA87] proposed a policy for what they call well-formed transactions, which they assert are as important in their field as is confidentiality in a military realm.

To see why, consider a company that orders and pays for materials. A representation of the procurement process might be this: A purchasing clerk creates an order for a supply, sending copies of the order to both the supplier and the receiving department.

The supplier sends an invoice to the accounting department. An accounting clerk compares the invoice with the original order (as to price and other terms) and the delivery form (as to quantity and item) and issues a check to the supplier.

The sequence of activities is important. A receiving clerk will not sign a delivery form without already having received a matching order (because suppliers should not be allowed to ship any quantities of any items they want and be paid), and an accounting clerk will not issue a check without already having received a matching order and delivery form (because suppliers should not be paid for goods not ordered or received). Furthermore, in most cases, both the order and the delivery form must be signed by authorized individuals. Performing the steps in order, performing exactly the steps listed, and authenticating the individuals who perform the steps constitute a well-formed transaction. The goal of the ClarkWilson policy is to maintain consistency between the internal data and the external (users') expectations of those data.

combining a transformation procedure, one or more constrained data items, and the identification of a user who is authorized to operate on those data items by means of the transaction procedure.

Separation of duty is commonly accomplished manually by means of dual signatures. Clark and Wilson triples are "stateless," meaning that a triple does not have a context of prior operations; triples are incapable of passing control information to other triples. Thus, if one person is authorized to perform operations TP1 and TP2, the Clark and Wilson triples cannot prevent the same person from performing both TP1 and TP2 on a given data item. However, it is quite easy to implement distinctness if it is stated as a policy requirement.

Brewer and Nash [BRE89] defined a security policy called the Chinese Wall that reflects certain commercial needs for information access protection. The security requirements reflect issues relevant to those people in legal, medical, investment, or accounting firms who might be subject to conflict of interest. A conflict of interest exists when a person in one company can obtain sensitive information about people, products, or services in competing companies.

The security policy builds on three levels of abstraction.

·      Objects. At the lowest level are elementary objects, such as files. Each file contains information concerning only one company.

·      Company groups. At the next level, all objects concerning a particular company are grouped together.

·      Conflict classes. At the highest level, all groups of objects for competing companies are clustered.

With this model, each object belongs to a unique company group, and each company group is contained in a unique conflict class. A conflict class may contain one or more company groups. For example, suppose you are an advertising company with clients in several fields: chocolate companies, banks, and airlines. You might want to store data on chocolate companies Suchard and Cadbury; on banks Citicorp, Deutsche Bank, and Credit Lyonnais; and on airline SAS. You want to prevent your employees from inadvertently revealing information to a client about that client's competitors, so you establish the rule that no employee will know sensitive information about competing companies. Using the Chinese Wall hierarchy, you would form six company groups (one for each company) and three conflict classes: {Suchard, Cadbury}, {Citicorp, Deutsche Bank, Credit Lyonnais}, and {SAS}.

The hierarchy guides a simple access control policy: A person can access any information as long as that person has never accessed information from a different company in the same conflict class. That is, access is allowed if either the object requested is in the same company group as an object that has previously been accessed or the object requested belongs to a conflict class that has never before been accessed. In our example, initially you can access any objects. Suppose you read from a file on Suchard. A subsequent request for access to any bank or to SAS would be granted, but a request to access Cadbury files would be denied. Your next access, of SAS data, does not affect future accesses. But if you then access a file on Credit Lyonnais, you will be blocked from future accesses to Deutsche Bank or Citicorp. From that point on, as shown in Figure 5-5, you can access objects only concerning Suchard, SAS, Credit Lyonnais, or a newly defined conflict class. 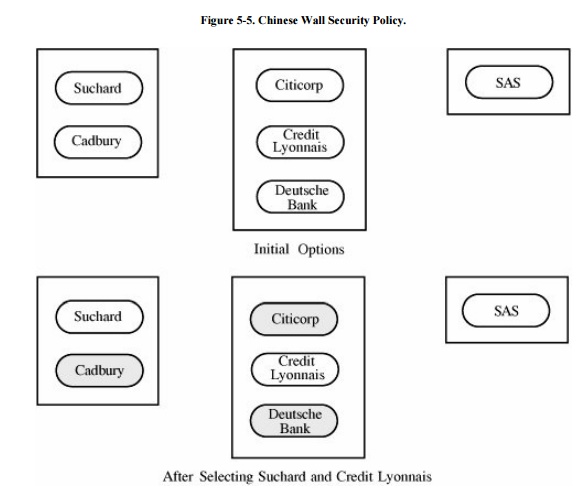 The Chinese Wall is a commercially inspired confidentiality policy. It is unlike most other commercial policies, which focus on integrity. It is also interesting because access permissions change dynamically: As a subject accesses some objects, other objects that would previously have been accessible are subsequently denied.