As described previously, a kernelized operating system consists of at least four levels: hardware, kernel, operating system, and user. Each of these layers can include sublayers. For example, in [SCH83b], the kernel has five distinct layers. At the user level, it is not uncommon to have quasi system programs, such as database managers or graphical user interface shells, that constitute separate layers of security themselves.

As we have seen earlier in this chapter (in Figure 5-15), the layered view of a secure operating system can be depicted as a series of concentric circles, with the most sensitive operations in the innermost layers. Then, the trustworthiness and access rights of a process can be judged by the process's proximity to the center: The more trusted processes are closer to the center. But we can also depict the trusted operating system in layers as a stack, with the security functions closest to the hardware. Such a system is shown in Figure 5-20. 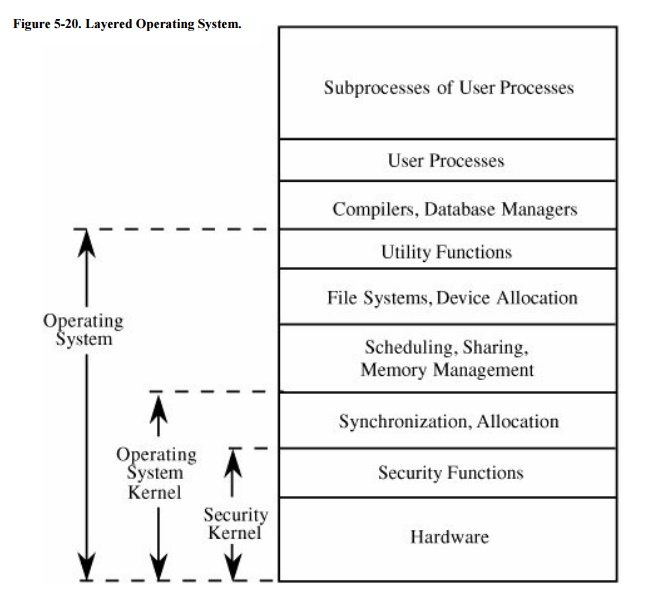 In this design, some activities related to protection functions are performed outside the security kernel. For example, user authentication may include accessing a password table, challenging the user to supply a password, verifying the correctness of the password, and so forth. The disadvantage of performing all these operations inside the security kernel is that some of the operations (such as formatting the userterminal interaction and searching for the user in a table of known users) do not warrant high security.

Alternatively, we can implement a single logical function in several different modules; we call this a layered design. Trustworthiness and access rights are the basis of the layering. In other words, a single function may be performed by a set of modules operating in different layers, as shown in Figure 5-21. The modules of each layer perform operations of a certain degree of sensitivity. 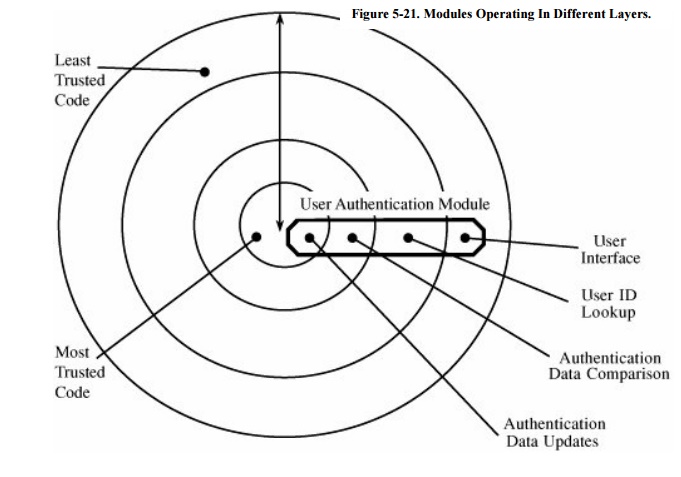 Neumann [NEU86] describes the layered structure used for the Provably Secure Operating System (PSOS). As shown in Table 5-4, some lower-level layers present some or all of their functionality to higher levels, but each layer properly encapsulates those things below itself. 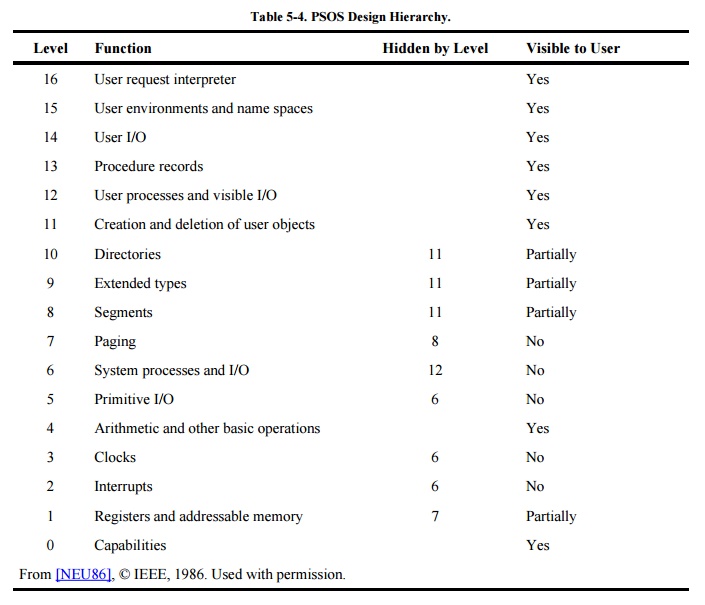 A layered approach is another way to achieve encapsulation, discussed in Chapter 3. Layering is recognized as a good operating system design. Each layer uses the more central layers as services, and each layer provides a certain level of functionality to the layers farther out. In this way, we can "peel off" each layer and still have a logically complete system with less functionality. Layering presents a good example of how to trade off and balance design characteristics.

Another justification for layering is damage control. To see why, consider Neumann's [NEU86] two examples of risk, shown in Tables 5-5 and 5-6. In a conventional, nonhierarchically designed system (shown in Table 5-5), any problemhardware failure, software flaw, or unexpected condition, even in a supposedly non-security-relevant portioncan cause disaster because the effect of the problem is unbounded and because the system's design means that we cannot be confident that any given function has no (indirect) security effect. 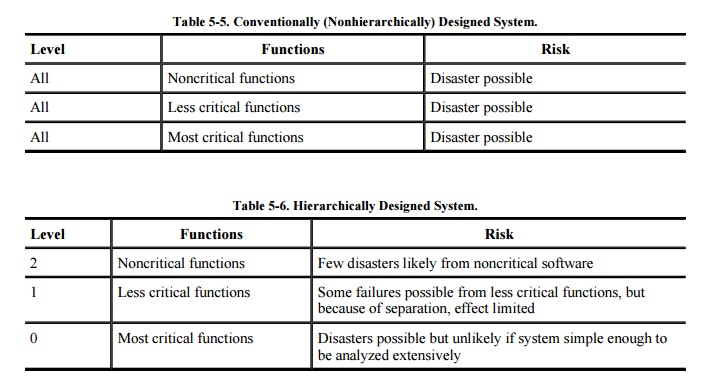 By contrast, as shown in Table 5-6, hierarchical structuring has two benefits:

Hierarchical structuring permits identification of the most critical parts, which can then be analyzed intensely for correctness, so the number of problems should be smaller.

Isolation limits effects of problems to the hierarchical levels at and above the point of the problem, so the effects of many problems should be confined.

These design propertiesthe kernel, separation, isolation, and hierarchical structurehave been the basis for many trustworthy system prototypes. They have stood the test of time as best design and implementation practices. (They are also being used in a different form of trusted operating system, as described in Sidebar 5-6.)

In the next section, we look at what gives us confidence in an operating system's security.

Sidebar 5-6: An Operating System for the Untrusting

The U.K. Regulation of Investigatory Powers Act (RIPA) was intended to broaden government surveillance capabilities, but privacy advocates worry that it can permit too much government eavesdropping.

Peter Fairbrother, a British mathematician, is programming a new operating system he calls M-o-o-t to keep the government at bay by carrying separation to the extreme. As described in The New Scientist [KNI02], Fairbrother's design has all sensitive data stored in encrypted form on servers outside the U.K. government's jurisdiction. Encrypted communications protect the file transfers from server to computer and back again. Each encryption key is used only once and isn't known by the user. Under RIPA, the government will have the power to require any user to produce the key for any message that user has encrypted. But if the user does not know the key, the user cannot surrender it.

Fairbrother admits that in the wrong hands M-o-o-t could benefit criminals, but he thinks the personal privacy benefits  outweigh this harm.