A kernel is the part of an operating system that performs the lowest-level functions. In standard operating system design, the kernel implements operations such as synchronization, interprocess communication, message passing, and interrupt handling.

There are several good design reasons why security functions may be isolated in a security kernel.

·    Unity. All security functions are performed by a single set of code, so it is easier to trace the cause of any problems that arise with these functions.

·    Modifiability. Changes to the security mechanisms are easier to make and easier to test.

·    Compactness. Because it performs only security functions, the security kernel is likely to be relatively small.

·    Verifiability. Being relatively small, the security kernel can be analyzed rigorously. For example, formal methods can be used to ensure that all security situations (such as states and state changes) have been covered by the design.

Notice the similarity between these advantages and the design goals of operating systems that we described earlier. These characteristics also depend in many ways on modularity, as described in Chapter 3.

On the other hand, implementing a security kernel may degrade system performance because the kernel adds yet another layer of interface between user programs and operating system resources. Moreover, the presence of a kernel does not guarantee that it contains all security functions or that it has been implemented correctly. And in some cases a security kernel can be quite large.

The most important part of a security kernel is the reference monitor, the portion that controls accesses to objects [AND72, LAM71]. A reference monitor is not necessarily a single piece of code; rather, it is the collection of access controls for devices, files, memory, interprocess communication, and other kinds of objects. As shown in Figure 5-12, a reference monitor acts like a brick wall around the operating system or trusted software. 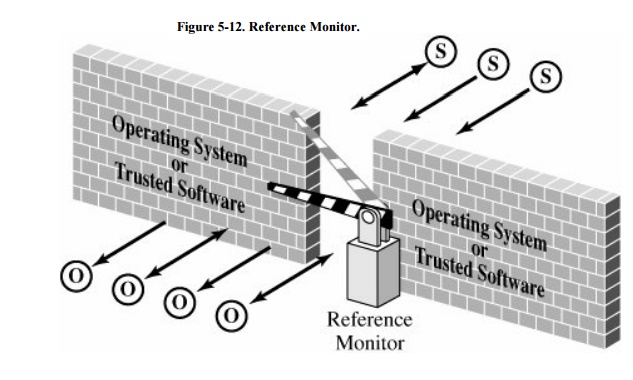 A reference monitor must be

tamperproof, that is, impossible to weaken or disable

unbypassable, that is, always invoked when access to any object is required

analyzable, that is, small enough to be subjected to analysis and testing, the completeness of which can be ensured

A reference monitor can control access effectively only if it cannot be modified or circumvented by a rogue process, and it is the single point through which all access requests must pass. Furthermore, the reference monitor must function correctly if it is to fulfill its crucial role in enforcing security. Because the likelihood of correct behavior decreases as the complexity and size of a program increase, the best assurance of correct policy enforcement is to build a small, simple, understandable reference monitor.

The reference monitor is not the only security mechanism of a trusted operating system. Other parts of the security suite include audit, identification, and authentication processing, as well as the setting of enforcement parameters, such as who the allowable subjects are and which objects they are allowed to access. These other security parts interact with the reference monitor, receiving data from the reference monitor or providing it with the data it needs to operate.

The reference monitor concept has been used for many trusted operating systems and also for smaller pieces of trusted software. The validity of this concept is well supported both in research and in practice.

It is easy to see that it is essential for the TCB to be both correct and complete. Thus, to understand how to design a good TCB, we focus on the division between the TCB and non-TCB elements of the operating system and spend our effort on ensuring the correctness of the TCB.

Just what constitutes the TCB? We can answer this question by listing system elements on which security enforcement could depend:

some notion of processes, so that we can separate and protect security-critical processes

primitive files, such as the security access control database and identification/authentication data

protected memory, so that the reference monitor can be protected against tampering

some interprocess communication, so that different parts of the TCB can pass data to and activate other parts. For example, the reference monitor can invoke and pass data securely to the audit routine.

It may seem as if this list encompasses most of the operating system, but in fact the TCB is only a small subset. For example, although the TCB requires access to files of enforcement data, it does not need an entire file structure of hierarchical directories, virtual devices, indexed files, and multidevice files. Thus, it might contain a primitive file manager to handle only the small, simple files needed for the TCB. The more complex file manager to provide externally visible files could be outside the TCB. Figure 5-13 shows a typical division into TCB and non-TCB sections. 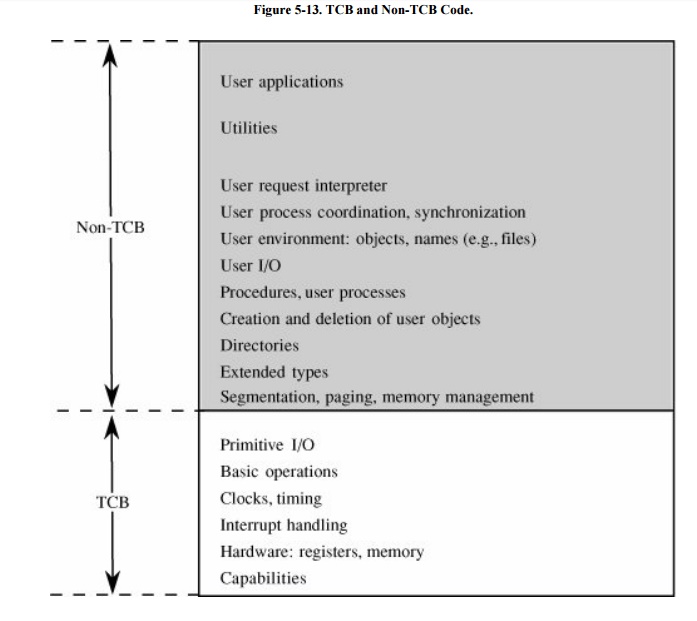 The TCB, which must maintain the secrecy and integrity of each domain, monitors four basic interactions.

Process activation. In a multiprogramming environment, activation and deactivation of processes occur frequently. Changing from one process to another requires a complete change of registers, relocation maps, file access lists, process status information, and other pointers, much of which is security-sensitive information.

Memory protection. Because each domain includes code and data stored in memory, the TCB must monitor memory references to ensure secrecy and integrity for each domain.

I/O operation. In some systems, software is involved with each character transferred in an I/O operation. This software connects a user program in the outermost domain to an I/O device in the innermost (hardware) domain. Thus, I/O operations can cross all domains.

The division of the operating system into TCB and non-TCB aspects is convenient for designers and developers because it means that all security-relevant code is located in one (logical) part. But the distinction is more than just logical. To ensure that the security enforcement cannot be affected by non-TCB code, TCB code must run in some protected state that distinguishes it. Thus, the structuring into TCB and non-TCB must be done consciously. However, once this structuring has been done, code outside the TCB can be changed at will, without affecting the TCB's ability to enforce security. This ability to change helps developers because it means that major sections of the operating systemutilities, device drivers, user interface managers, and the likecan be revised or replaced any time; only the TCB code must be controlled more carefully. Finally, for anyone evaluating the security of a trusted operating system, a division into TCB and non-TCB simplifies evaluation substantially because non-TCB code need not be considered.

Security-related activities are likely to be performed in different places. Security is potentially related to every memory access, every I/O operation, every file or program access, every initiation or termination of a user, and every interprocess communication. In modular operating systems, these separate activities can be handled in independent modules. Each of these separate modules, then, has both security-related and other functions. 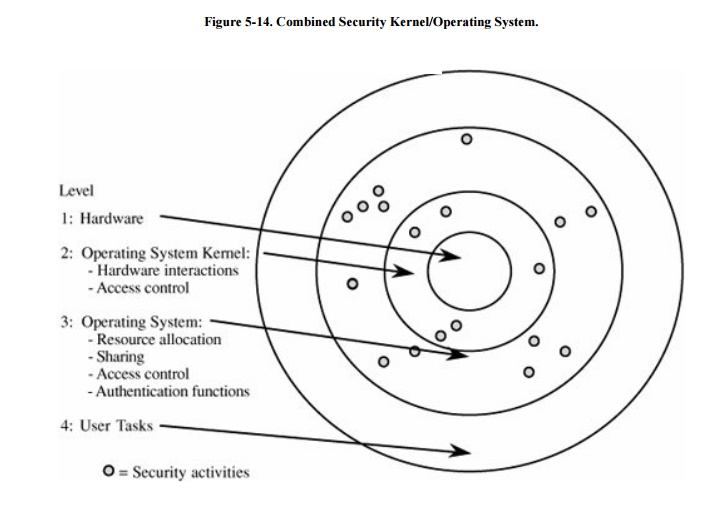 A more sensible approach is to design the security kernel first and then design the operating system around it. This technique was used by Honeywell in the design of a prototype for its secure operating system, Scomp. That system contained only twenty modules to perform the primitive security functions, and it consisted of fewer than 1,000 lines of higher-level-language source code. Once the actual security kernel of Scomp was built, its functions grew to contain approximately 10,000 lines of code. 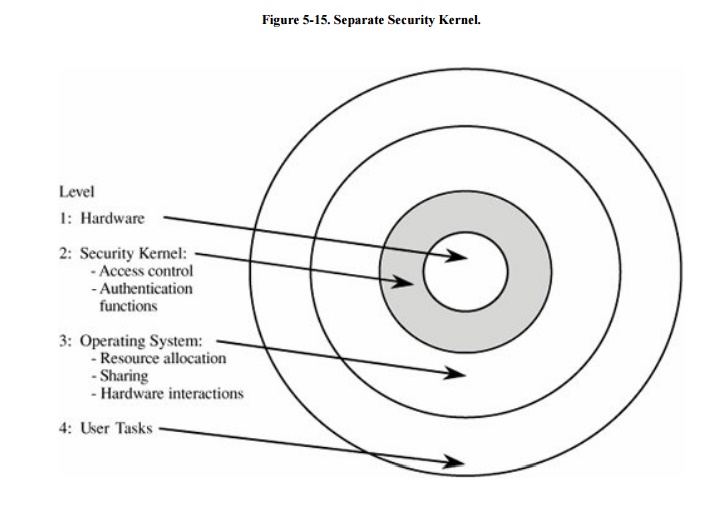