The structure of VMO S is similar to short-channel power FET t hat is constructed as a vertical structure. The operation is same as that of a Double-Diffused MO S (DMOS) device. Take a look at the figure below to know more about the VMOS structure.

The structure of VMO S is similar to short-channel power FET t hat is constructed as a vertical structure. The operation is same as that of a Double-Diffused MO S (DMOS) device. Take a look at the figure below to know more about the VMOS structure. This device, like a DMOS device has a channel length which is set by the difference between the p-typ e and n+ diffusions.

In VMOS, the p-type epitaxial layer is lightly doped. Along with this, the space available for the expansion of the depletion region between the p+ diffused layer and the n+ substrate will cause a high breakdown volt age (BVDS) and a low drain capacitance. That is, the breakdown voltage will be almost greater t han or equal to 50 Volts. Due to the heavily doped n+ substrate, the value of the drain series resistance is kept very small.

The outer wall of the VMOS has an SiO2 insulation layer, which is covered by an aluminum layer. This aluminum layer act s as the gate for the device. In a VMOS dev ice the thickness of the layer does not depend on the mask resolution. And due to the fact thaat a conventional mask lithographic process is used f or its fabrication, the p-region is stretched as a channel above the substrate. Thus, it is easy to make a channel as short as 1micro meter, which is essential for high-speed MOSFETs.

Another unique feature of VMOS is the anisotropically-etched V-groove cut normally to the surface that extends through both the n+, p regions and penetrates slightly through the epitaxial region. Due to this, it is easier for the gate to overlay the p-diffusion which acts as the current conducting channel. The packing density of such devices on a chip is more as the MOSFET’s are formed on the slopes of the grooves. 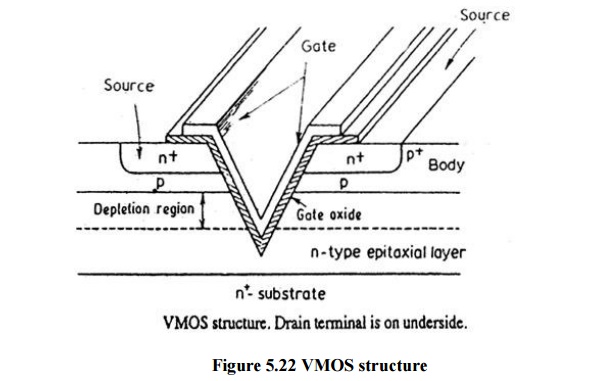 The V-grooves are produced by an anisotropic or orientation – dependent etching (ODE) process. The etchant, which is usually KOH at (80 to 100)°C, attacks silicon very rapidly in the [100] crystallographic direction, but very slowly in the [111] direction. In the case of (100) oriented silicon substrates the result will be the production of V-shaped grooves that have (111) side walls as shown in the figure below.

The angle of the (111) groove side walls with respect to the (100) silicon surface will be 54.74°. The width of the opening in the oxide layer controls the width of the grooves, W. The oxide layer width is used as an etching mask since SiO2 is attacked only very slowly by the etching solution.

There is also the existence of two conduction paths between drain and source, as shown in Fig., to further contribute to a higher current rating. The net result is a device with drain currents that can reach the ampere levels with power levels exceeding 10 W.

Compared with commercially available planar MOSFETs, VMOS FETs have reduced channel resistance levels and higher current and power ratings.VMOS FETs have a positive temperature coefficient that will combat the possibility of thermal runaway.

The reduced charge storage levels result in faster switching times for VMOS construction compared to those for conventional planar construction.

In fact, VMOS devices typically have switching times less than one-half that encountered for the typical BJT transistor.