The DIAC is a full-wa ve or bi-directional semiconductor switch t hat can be turned on in both forward and reverse pola rities. The DIAC gains its name from the contraction of the words DIode Alternating Current.

The DIAC is a full-wa ve or bi-directional semiconductor switch t hat can be turned on in both forward and reverse pola rities. The DIAC gains its name from the contraction of the words DIode Alternating Current.

The DIAC is widely us ed to assist even triggering of a TRIAC wheen used in AC switches. DIACs are mainly used in dimmer applications and also in starter circuits for florescent lamps.

A Diac is two terminal , three layer bi directional device which ca n be switched from its off state for either polarity of applied voltage.

The DIAC circuit symbol is generated from the two triangles held between two lines as shown below. In some way this demonstrates the structure of the device which can be considered also as two junctions 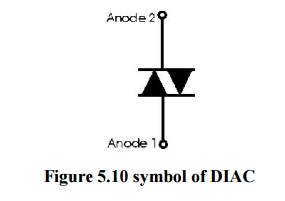 The two terminals of the device are normally designated either Anode 1 and Anode 2 or Main Terminals 1 and 2, i.e. MT1 and MT2.

The DIAC can be constructed in either npn or pnp form. The two leads are connected to p regions of silicon separated by an n- region. The structure of DIAC is similar to that of a transistor differences are

·        The three regions are nearly identical in size. The doping concentrations are identical to give the device symmetrical properties.

The DIAC can e fabricated as either a two layer or a five layer structure. In the three layer structure the switching occurs when the junction that is reverse biased experiences reverse breakdown. The three layer version of the device is the more common and can have a break-over voltage of around 30 V. Operation is almost symmetrical owing to the symmetry of the device.

A five layer DIAC structure is also available. This does not act in quite the same manner, although it produces an I-V curve that is very similar to the three layer version. It can be considered as two break-over diodes connected back to back. 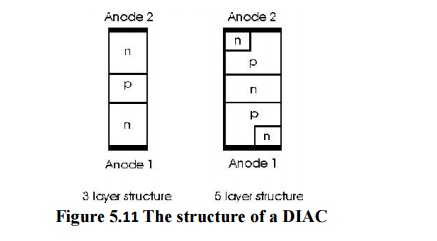 Figure 5.11 The structure of a DIAC

For most applications a three layer version of the DIAC is used. It provides sufficient improvement in switching characteristics. For some applications the five layer device may be used.

When a positive or negative voltage is applied across the terminals of Diac only a small leakage current Ibo will flow through the device as the applied voltage is increased , the leakage current will continue to flow until the voltage reaches breakover voltage Vbo at this point avalanche breakdown of the reverse biased junction occurs and the device exhibits negative resistance i.e current through the device increases with the decreasing values of applied voltage the voltage across the device then drops to break back voltage Vw.

V- I characteristics of a DIAC 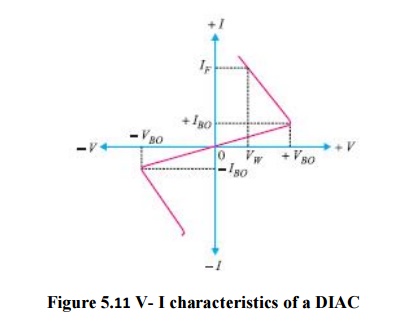 Figure 5.11 V- I characteristics of a DIAC

For applied positive voltage less than + Vbo and Negative voltage less than -Vbo , a small leakage current flows thrugh the device. Under such conditions the diac blocks flow of current and behaves as an open circuit. the voltage +Vbo and -Vbo are the breakdown voltages and usually have range of 30 to 50 volts.

When the positive or negative applied voltage is equal to or greater than tha breakdown voltage Diac begins to conduct and voltage drop across it beco mes a few volts conduction then continues until the device current drops below its holding current breakover voltage and holding current values are identical for the forward and reverse regions of operation.

Diacs are used for triggering of triacs in adjustable phase control of a c mains power. Applications are light dimming heat control universal motor speed control. Typically the DIAC is placed in series with the gate of a TRIAC. DIACs are often used in conjunction with TRIACs because these devices do not fire symmetrically as a result of slight differences between the two halves of the device. This results in harmonics being generated, and the less symmetrical the device fires, the greater the level of harmonics produced. It is generally undesirable to have high levels of harmonics in a power system.

To help in overcoming this problem, a DIAC is often placed in series with the gate. This device helps make the switching more even for both halves of the cycle. This results from the fact that its switching characteristic is far more even than that of the TRIAC. Since the DIAC prevents any gate current flowing until the trigger voltage has reached a certain voltage in either direction, this makes the firing point of the TRIAC more even in both directions.