Liquid crystal cell displays (LCDs) are used in similar applications where LEDs are used. These applications are display of numeric and alphanumeric characters in dot matrix and segmental displays.

Liquid crystal cell displays (LCDs) are used in similar applications where LEDs are used. These applications are display of numeric and alphanumeric characters in dot matrix and segmental displays.

The LCDs are of two types :

The liquid crystal material may be one of the several organic compounds which exhibit optical properties of a crystal though they remain In liquid form. Liquid crystal is layered between glass sheets with transparent electrodes deposited on the inside faces. When a potential is applied across the cell, charge carriers flowing through the liquid disrupt the molecular arrangement and produce turbulence.

When the liquid is not activated, it is transparent. When the liquid is activated the molecular turbulence causes light to be scattered in all directions and the cell appears to be bright. The phenomenon is called dynamic scattering.

In the Transmittive type cell, both glass sheets are transparent, so that light from a rear source is scattered in the forward direction when the cell is activated.

The reflective type cell has a reflecting surface on one sid e of glass sheets. The incident light on the fr ont surface of the cell is dynamic ally scattered by an activatedcell. Both types of cells appear quite bright when activated ev en under ambient light conditions.

The liquid crystals are light reflectors or transmitters and t herefore they consume small amounts of energy (unlike light generators). Unlike LEDs which ca n work on d.c. the LCDs require a.c. voltage supply. A typical voltage supply to dynamic scatterin g LCD is 30 V peak to peak with 50Hz.

The liquid-crystal dis play (LCD) has the distinct advantage of having a lower power requirement than the LED. It is typically in the order of microwatts for the display, as compared to the same order of milliwatts for LEDs. It does, however, require an e xternal or internal light source and is limited to a tem perature range of about 0° to 60°C. Lifetime is an area of concern because LCDs can chemically degrade. The types receiving the major inte rest today are the field-effect and dynamic-scattering units. 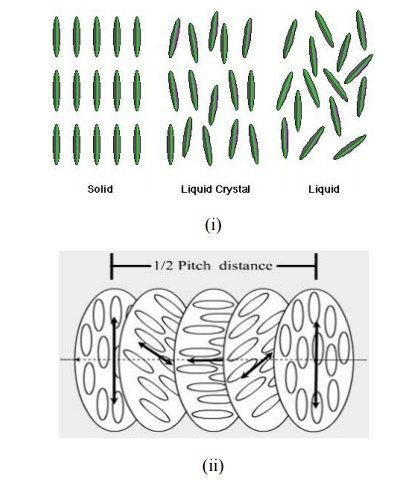 A liquid crystal is a m aterial (normally organic for LCDs) that will flow like a liquid but whose molecular structure has some properties normally associated with solids.

For the light-scatterin g units, the greatest interest is in the nemati c liquid crystal, having the crystal structure shown in Figure 5.27 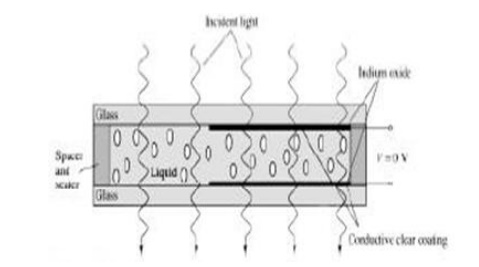 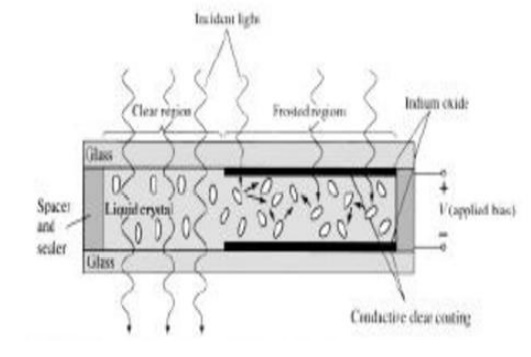 The field-effect or twisted nematic LCD has the same segment appearance and thin layer of encapsulated liquid crystal, but its mode of operation is very different.

Similar to the dynamic- scattering LCD, the field-effect LCD can be operated in the reflective or transmissive mode with an internal source.

The transmissive display appears in Figure 5.29 The internal light source is on the right, and the viewer is on the left. 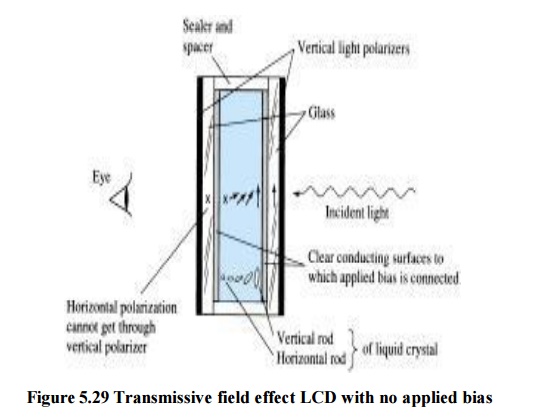 The reflective-type field-effect LCD is shown in Figure 5.30 In this case, the horizontally polarized light at the far left encounters a horizontally polarized filter and passes through to the reflector, where it is reflected back into the liquid crystal, bent back to the other vertical polarization, and returned to the observer.

If there is no applied voltage, there is a uniformly lit display. The application of a voltage results in a vertically incident light encountering a horizontally polarized filter at the left, which it will not be able to pass through and will be reflected. 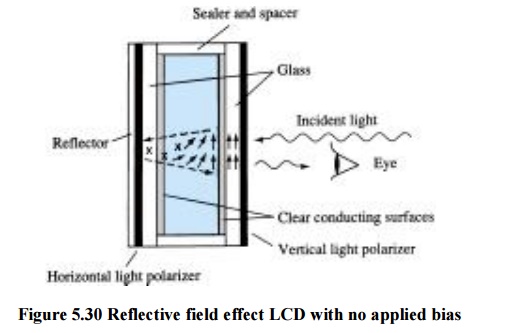 ·        Analog quantities can also be displayed as a number on a suitable device. (e.g.) Digital millimeters.