The current-voltage characteristic (I/V Curves) of a photodiode with no light on its junction (dark mode) is very similar to a normal signal or rectifying diode.

Photo junction Devices are basically PN-Junction light sensors or detectors made from silicon semiconductor PN-junctions which are sensitive to light and which can detect both visible light and infra-red light levels. Photo-junction devices are specifically made for sensing light and this class of photoelectric light sensors include the Photodiode and the Phototransistor.

Symbol and construction of photo diode

Figure 5.36 Biasing arrangement and construction of photodiode and Symbol

Photo-diode is a two-terminal semiconductor P-N junction device and is designed to operate with reverse bias. The basic biasing arrangement, construction and symbols for the device are given in figure. It is either mounted in translucent case or has its semiconductor junction mounted beneath an optical lens. The output voltage is taken from across a series-connected load resistor R. This resistance may be connected between the diode and ground or between the diode and the positive terminal of the supply, as illustrated in figure.

When light energy bombards a P-N junction, it dislodges valence electrons. The more light striking the junction the larger the reverse current in a diode. It is due to generation of more and more charge carriers with the increase in level of illumination. This is clearly shown in figure 5.37 for different intensity levels. The dark current is the current that exists when no light is incident. It is to be noted here that current becomes zero only with a positive applied bias equals to VQ.

The almost equal spacing between the curves for the same increment in luminous flux reveals that the reverse saturation current I0 increases linearly with the luminous flux as shown in figure. Increase in reverse voltage does not increase the reverse current significantly, because all available charge carriers are already being swept across the junction. For reducing the reverse saturation current I0 to zero, it is necessary to forward bias the junction by an amount equal to barrier potential. Thus the photodiode can be used as a photoconductive device. 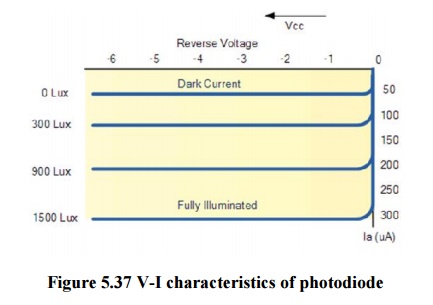 The current-voltage characteristic (I/V Curves) of a photodiode with no light on its junction (dark mode) is very similar to a normal signal or rectifying diode. When the photodiode is forward biased, there is an exponential increase in the current, the same as for a normal diode. When a reverse bias is applied, a small reverse saturation current appears which causes an increase of the depletion region, which is the sensitive part of the junction. Photodiodes can also be connected in a current mode using a fixed bias voltage across the junction. The current mode is very linear over a wide range.

On removal of reverse bias applied across the photodiode, minority charge carriers continue to be swept across the junction while the diode is illuminated. This has the effect of increasing the concentration of holes in the P-side and that of electrons in the N-side But the barrier potential is negative on the P-side and positive on the N-side, and was created by holes flowing from P to N-side and electrons from N to P-side during fabrication of junction. Thus the flow of minority carriers tends to reduce the barrier potential.

When an external circuit is connected across the diode terminals, the minority carrier; return to the original side via the external circuit. The electrons which crossed the junction from P to N-side now flow out through the N-terminal and into the P-terminal This means that the device is behaving as a voltage cell with the N-side being the negative terminal and the P-side the positive terminal. Thus, the photodiode is & photovoltaic device as well as photoconductive device.

When used as a light sensor, a photodiodes dark current (0 lux) is about 10uA for geranium and 1uA for silicon type diodes. When light fall upon the junction more hole/electron pairs are formed and the leakage current increases. This leakage current increases as the illumination of the junction increases. Thus, the photodiodes current is directly proportional to light intensity falling onto the PN-junction.

One main advantage of photodiodes when used as light sensors is their fast response to changes in the light levels.

One disadvantage of this type of photo device is the relatively small current flow even when fully lit.