A charge-coupled device (CCD) is a device for the movement of electrical charge, usually from within the device to an area where the charge can be manipulated, for example conversion into a digital value.

A charge-coupled device (CCD) is a device for the movement of electrical charge, usually from within the device to an area where the charge can be manipulated, for example conversion into a digital value. This is achieved by "shifting" the signals between stages within the device one at a time. CCDs move charge between capacitive bins in the device, with the shift allowing for the transfer of charge between bins.

The CCD is a major piece of technology in digital imaging. In a CCD image sensor, pixels are represented by p-doped MOS capacitors. These capacitors are biased above the threshold for inversion when image acquisition begins, allowing the conversion of incoming photons into electron charges at the semiconductor-oxide interface; the CCD is then used to read out these charges. Although CCDs are not the only technology to allow for light detection, CCD image sensors are widely used in professional, medical, and scientific applications where high-quality image data is required.

In applications with less exacting quality demands, such as consumer and professional digital cameras, active pixel sensors (CMOS) are generally used; the large quality advantage CCDs enjoyed early on has narrowed over time. 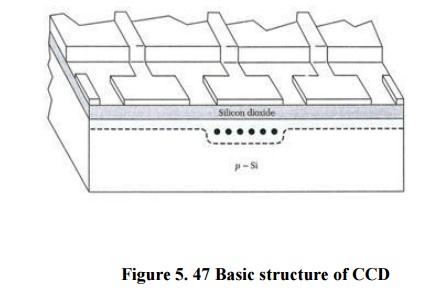 In a CCD for capturing images, there is a photoactive region (an epitaxial layer of silicon), and a transmission region made out of a shift register (the CCD, properly speaking).An image is projected through a lens onto the capacitor array (the photoactive region), causing each capacitor to accumulate an electric charge proportional to the light intensity at that location.

A one- dimensional array, used in line-scan cameras, captures a single slice of the image, while a two- dimensional array, used in video and still cameras, captures a two-dimensional picture corresponding to the scene projected onto the focal plane of the sensor. Once the array has been exposed to the image, a control circuit causes each capacitor to transfer its contents to its neighbor (operating as a shift register).

The last capacitor in the array dumps its charge into a charge amplifier, which converts the charge into a voltage. By repeating this process, the controlling circuit converts the entire contents of the array in the semiconductor to a sequence of voltages. In a digital device, these voltages are then sampled, digitized, and usually stored in memory; in an analog device (such as an analog video camera), they are processed into a continuous analog signal (e.g. by feeding the output of the charge amplifier into a low-pass filter) which is then processed and fed out to other circuits for transmission, recording, or other processing. 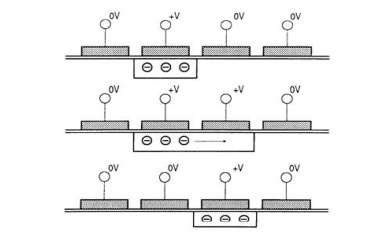 Figure 5.48 The mechanism of charge transfer in a CCD

CCD can convert optical signals into digital signal directly to achieve the acquisition, storage, transmission and proceeding of images. The special characterizations are:

CCD device and its application technology have been developed, and remarkable progress, especially in the mage sensor and non-contact measurement have been made in the past decades years. With the theory development, CCD becomes a high-sensitivity device and used in many regions. Some of them are listed here in this report:

CCD cameras contain light-sensitive silicon chips that detect electrons excited by incoming light, and the micro circuitry that transfers a detected signal along a row of discrete picture elements or pixels, scanning the image very rapidly [9]. Two-dimensional CCD arrays with many thousands of pixels are used in these CCD cameras, and they are often used in machine vision applications.

The CCD camera can be applied in astronomy, medicine, optical scanner, etc., as its high quantum efficiencies, linearity of outputs and ease of use.

CCD image sensors are electronic devices which are capable of transforming a light pattern (image) into an electric charge pattern (an electronic image). The CCD consists of several individual elements that have the capability of collecting, storing and transporting electrical charge from one element to another, as described in the theory part. Together with the photosensitive properties of silicon, CCD is used to design image sensors.

With semiconductor technologies and design rules, one or more output amplifiers at the edge of the chip collect the signals from the CCD, and electronic images can be obtained by applying series of pulses that transfer the charge of one pixel after another to the output amplifier, line after line. The output amplifier converts the charge into a voltage, while external electronics will transform this output signal into a form suitable for monitors or frame grabbers. Thus CCDs have extremely low noise figures.CCD image sensors can also be a color sensor or a monochrome sensor, as the CCD camera.

CCD image sensors have found important applications in many areas of society and science, like digital cameras, scanners, medical devices, satellite surveillance and in instrumentation for astronomy and astrophysics.

CCD used in fax machines forms images on the surface of arrayed capacitor. The brightness of images produces each capacity with charges, which can be transferred to amplifier and forms voltage at the edge of circuit. With the information of the voltage, the images can be stored and print out.