The SCR stand for Silicon Control Rectifier, it is used in industries because it can handle high values of current and voltage.

A silicon controlled rectifier i s a semiconductor device that acts as a true electronic switch. It can change alternating current and at the same time can control the amount of power fed to the load. SCR combines the features of a rectifier and a transistor.

Load is connected in series with anode the anode is always ke pt at positive potential w.r.t cathode.

The Silicon Control Rectifier SCR start conduction when it is forwa rd biased. For this purpose the cathode is kept at negative and anode at positive. When positivee clock pulse is applied at the gate the SCR turns ON.

3 When Gate is Open

No voltage applied to the gate, j2 is reverse biased while j1 and j3 are FB . J1 and J3 is just in npn transistor with base open .no current flows through the load RL and SCR is cut off. If the applied voltage is gradually increased a stage is reached when RB junction J2 breakdown .the SCR now conducts heavily and is said to be ON state. the applied voltage at which SCR conducts heavily without gate voltage is called Break over Voltage.

4 When Gate is Positive w.r.to Cathode:-

The SCR can be made to conduct heavily at smaller applied voltage by applying small positive potential to the gate.J3 is FB and J2 is RB the electron from n type material start moving across J3 towards left holes from p type toward right. Electrons from j3 are attracted across junction J2 and gate current starts flowing. as soon as gate current flows anode current increases. the increased anode current in turn makes more electrons available at J2 breakdown and SCR starts conducting heavily. the gate loses all control if the gate voltage is removed anode current does not decrease at all. The only way to stop conduction is to reduce the applied voltage to zero.

It is the minimum forward voltage gate being open at which SCR starts conducting heavily i.e turned on.

It is the maximum reverse voltage applied to an SCR without conducting in the reverse direction.

It is the maximum anode current gate being open at which SCR is turned off from on conditions.

There are two methods through which Silicon Control Rectifier SCR can be turned OFF, 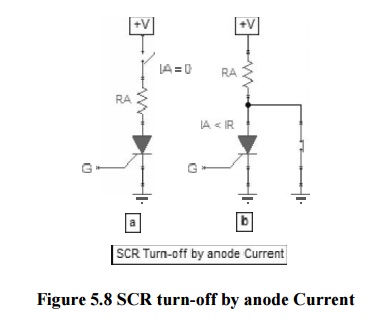 In this method a paralle l or a series switch is used to turn OFF the S ilicon Control Rectifier (SCR electronics) by turning O FF the switch. 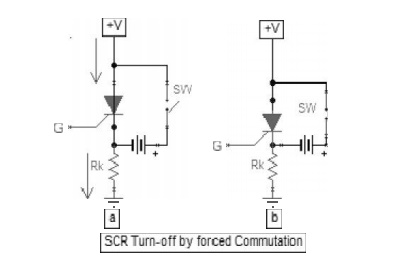 In this method a revers ed polarity battery is connected, so the cur rent through the Silicon Control Rectifier SCR is reduced and it turn OFF. 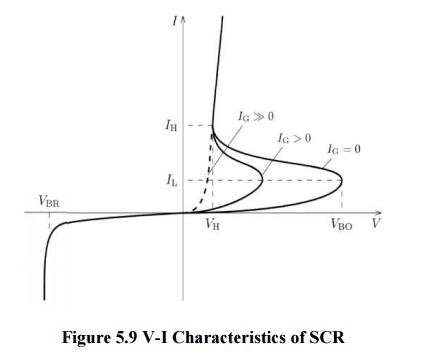 When anode is +ve w.r.t cathode the curve between V & I is called Forward characteristics. OABC is the forward characteristics of the SCR at Ig =0. if the supplied voltage is increased from zer o point A is reached .SCR starts conducti ng voltage across SCR suddenly drops (dotted curve AB) most of supply voltage appears across RL.