Photovoltaic cells are made from single crystal silicon PN junctions, the same as photodiodes with a very large light sensitive region but are used without the reverse bias. They have the same characteristics as a very large photodiode when in the dark.

The most common type of photovoltaic light sensor is the Solar Cell. Solar cells convert light energy directly into DC electrical energy in the form of a voltage or current to a power a resistive load such as a light, battery or motor. Then photovoltaic cells are similar in many ways to a battery because they supply DC power.

However, unlike the other photo devices we have looked at above which use light intensity even from a torch to operate, photovoltaic solar cells work best using the suns radiant energy.

Solar cells are used in many different types of applications to offer an alternative power source from conventional batteries, such as in calculators, satellites and now in homes offering a form of renewable power.

Photovoltaic cells are made from single crystal silicon PN junctions, the same as photodiodes with a very large light sensitive region but are used without the reverse bias. They have the same characteristics as a very large photodiode when in the dark.

When illuminated the light energy causes electrons to flow through the PN junction and an individual solar cell can generate an open circuit voltage of about 0.58v (580mV). Solar cells have a “Positive” and a “Negative” side just like a battery.

Individual solar cells can be connected together in series to form solar panels which increases the output voltage or connected together in parallel to increase the available current. Commercially available solar panels are rated in Watts, which is the product of the output voltage and current (Volts times Amps) when fully lit.

The amount of available current from a solar cell depends upon the light intensity, the size of the cell and its efficiency which is generally very low at around 15 to 20%. To increase the overall efficiency of the celll commercially available solar cells use polycrystalline silicon or amorphous silicon, which have no crystalline structure, and can generate currents of between 20 to 40mA per cm2.

Other materials used in the construction of photovoltaic cells includ e Gallium Arsenide,

Copper Indium Diselenide and Cadmium Telluride. These different materials each have a different spectrum band response, and so can be “tuned” to produce an output voltage at different wavelengths of light.

In this tutorial about Light Sensors, we have looked at several exammples of devices that are classed as Light Sensors. T his includes those with and those without PN-junctions that can be used to measure the intensity of light.

In the next tutorial we will look at output devices called Actuators. Actuators convert an electrical signal into a correspo nding physical quantity such as movement, force, or sound. One such commonly used output de vice is the Electromagnetic Relay.

In recent years, there has been increasing interest in the solar cell as an alternative source of energy. When we consider that the power density received from the sun at sea level is about 100 mW/cm2 (1 kW/m2), it is certainly an energy source that requires further research and development to maximize the conversion efficiency from solar to electrical energy.

The basic construction of a silicon p-n junction solar cell appears in Figurre 5.43. As shown in the top view, every effort is made to ensure that the surface area perpendicular to the sun is a maximum. Als o, note that the metallic conductor connected to the p-type material and the thickness of the p-type material are such that they ensure that a maximum number of photons of light energy will reach the junction

A photon of light energy in this region may collide with a va lence electron and impart to it sufficient energy to leave the parent atom. The result is a generation of free electrons and holes. This phenomenon will occur on each side of the junction.

In the p-type material, the newly generated electrons are minority carriers and will move rather freely across the junction as explained for the basic p-n junction with no applied bias. A similar discussion is true for the holes generated in the n-type material.

The result is an increase in the minority-carrier flow, which is opposite in direction to the conventional forward current of a p-n junction. This increase in reverse current is shown in Figure 5.44. Since V= 0 anywhere on the vertical axis and represents a short-circuit condition, the current at this intersection is called the short-circuit current and is represented by the notation ISC. 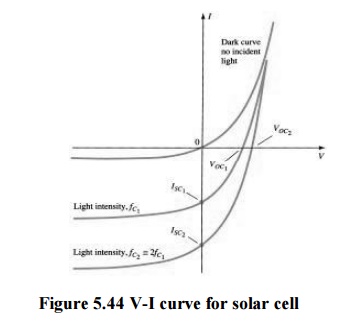 Under open-circuit co nditions (id = 0), the photovoltaic voltage V OC will result. This is a logarithmic function of t he illumination, as shown in Figure 5.45. V OC is the terminal voltage of a battery under n o-load (open-circuit) conditions. Note, however, in the same figure that the short- circuit current is a linear function of the illumination. 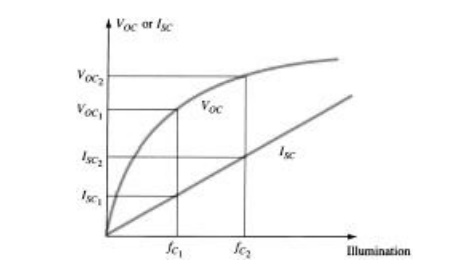 Figure 5.45 Voc and Isc versus illumination for solar c ell

Selenium and silicon are the most widely used materials for solar cells, although gallium arsenide, indium arsenide, and cadmium sulfide, among others, are also used.