Photo junction Devices are basically PN-Junction light sensors or detectors made from silicon semiconductor PN-junctions which are sensitive to light and which can detect both visible light and infra-red light levels. Photo-junction devices are specifically made for sensing light and this class of photoelectric light sensors include the Photodiode and the Phototransistor.

Photo transistors operate the same as the photodiode except that they can provide current gain and are much more sensitive than the photodiode with currents are 50 to 100 times greater than that of the standard photodiode and any normal transistor can be easily converted into a phototransistor light sensor by connecting a photodiode between the collector and base.

Phototransistors consist mainly of a bipolar NPN Transistor with its large base region electrically unconnected, although some phototransistors allow a base connection to control the sensitivity, and which uses photons of light to generate a base current which in turn causes a collector to emitter current to flow. Most phototransistors are NPN types whose outer casing is either transparent or has a clear lens to focus the light onto the base junction for increased sensitivity.

In the NPN transistor the collector is biased positively with respect to the emitter so that the base/collector junction is reverse biased. therefore, with no light on the junction normal leakage or dark current flows which is very small. When light falls on the base more electron/hole pairs are formed in this region and the current produced by this action is amplified by the transistor. 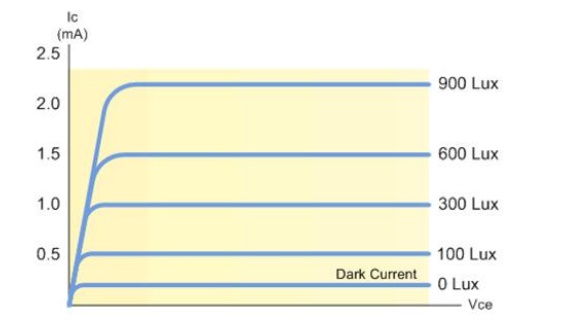 Some of the areas of application for the phototransistor include punch-card readers, computer logic circuitry, lighting control (highways, etc.), level indication, relays, and counting systems.

Phototransistors have several important advantages that separate them from other optical sensors. They produce a higher current than photodiodes and also produce a voltage, something that photoresistors cannot do. Phototransistors are very fast and their output is practically instantaneous. They are relatively inexpensive, simple, and so small that several of them can fit onto a single integrated computer chip.

While phototransistors can be advantageous, they also have several disadvantages. Phototransistors made of silicon cannot handle voltages over 1,000 Volts. They do not allow electrons to move as freely as other devices, such as electron tubes, do. Also, phototransistors are also more vulnerable to electrical surges/spikes and electromagnetic energy.