Delayed-type hypersensitivity (DTH) requires more than 18 h after exposure to an immunogen for the symptoms to become apparent.

Delayed-type hypersensitivity (DTH) requires more than 18 h after exposure to an immunogen for the symptoms to become apparent. This type of hypersensitivity is caused by T lymphocytes rather than antibody. The DTH reaction is typified by the Mantoux reaction. The vaccine to protect against tuberculosis (TB) consists of an attenuated form of Bacillus Calmette Guérin (BCG) which is a strain of Mycobacterium bovis . Before being given the vaccine, individuals are skin tested to see if they are already sensitized by infection or previous vaccination. This involves injecting an extract of mycobacteria, called purified protein derivative (PPD) intradermally. If an individual is sensitized, then after about 18–24 h, the injection site becomes swollen and red. The swelling increases for around 48 h then subsides slowly so that this ‘positive’ reaction is still visible after several weeks. An individual who gives a positive Mantoux test may then be investigated to ensure that the positive result was due to prior sensitization rather than active disease.

The swelling is caused by small lymphocytes and monocytes infiltrating into the area. Initially, sensitized CD4+ T cells respond to PPD by releasing cytokines (Figure 5.15) that attract and retain monocytes at the site and induce inflammation, allowing the entry of more CD4+ cells. Thus a cascade reaction occurs, producing a slow but progressive swelling at the site of the injection. The reaction subsides once the phagocytic monocytes have removed all the PPD. 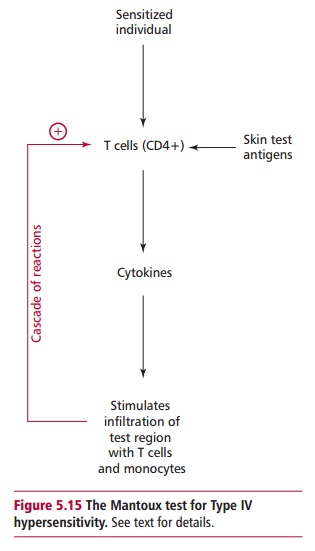 Delayed type hypersensitivity is also seen in contact allergies to a number of chemicals, including certain biological stains, some hair dyes, nickel salts in cheap jewellery, mercuric salts in some tattoo dyes, fluorodinitrobenzene and some plant biochemicals, such as urushiol in poison ivy. Typically, once sensitized, an individual will develop dermatitis approximately 18 to 24 h after further skin contact with the same chemical. Skin sensitizing chemicals are not typical immunogens, since they are neither proteins nor large molecules. However, it appears that sensitization involves their chemical binding to skin proteins to form a hapten-protein conjugate . Langerhans cells, which are antigen presenting cells in the skin, process the ‘new’ antigen and present it to helper T lymphocytes, which become sensitized. Once this has happened, any further contact with the chemical will promote cytokine release from T cells, producing a cascade similar to that of the Mantoux reaction

Laboratory workers need to be aware of the skin sensitizing nature of many of the chemicals used in biomedical science and to conduct risk assessments for their use, since sensitization, once induced, is irreversible. The only treatment for Type IV hypersensitivy is to avoid the allergen, although corticosteroid creams may give some relief during an episode of dermatitis.