Type I hypersensitivity is also referred to as immediate, because its effects are apparent within eight h of exposure to an immunogen.

Type I hypersensitivity is also referred to as immediate, because its effects are apparent within eight h of exposure to an immunogen. The effects can be fairly trivial, as in hay fever, or life threatening, as in atopic (Margin Note 5.4) or allergic asthma or anaphylactic shock. The term allergy is often used for Type I, although this is also used for some of the other types. Immunogens that cause allergies are often referred to as allergens and this is the term that will be used here. 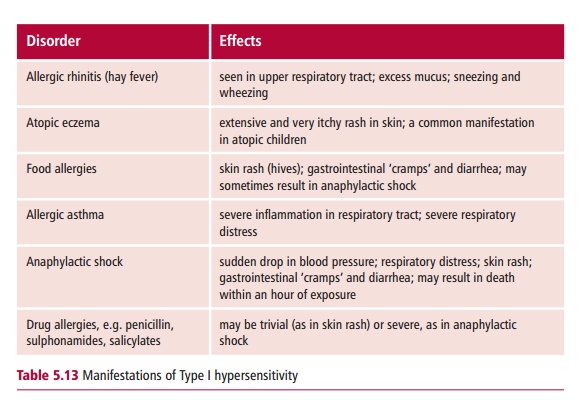 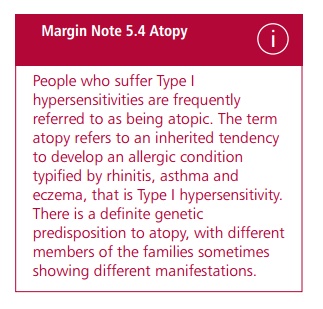 The different manifestations (Table 5.13) of Type I depend on the degree of previous exposure to the allergen and also on the route of exposure. The underlying cause is the production of IgE in response to an allergen. This type of antibody stimulates inflammatory responses that are aimed at eliminating parasitic worms. Atopic individuals produce IgE in response to allergens that, in nonallergic individuals, would stimulate the production of IgG. The tissue mast cells and blood basophils have receptors for the Fc region of IgE, so that IgE binds to the surface of these cells. The more sensitized an individual, the more their mast cells are coated with IgE. Further exposure to the same allergen results in the cross-linking of mast-cell bound IgE by the allergen (Figure 5.10). This triggers an explosive degranulation of the mast cell that releases pharmacologically active mediators, including histamine, which causes vasodilation, smooth muscle contraction and mucus secretion, depending on where they are released. In addition the subsequent release of further mediators, for example leukotrienes and prostaglandins, which are synthesized at the mast cell membrane potentiate inflammation and smooth muscle contraction. This response which evolved as a defense against multicellular parasites, causes the characteristic symptoms of the hypersensitivity. 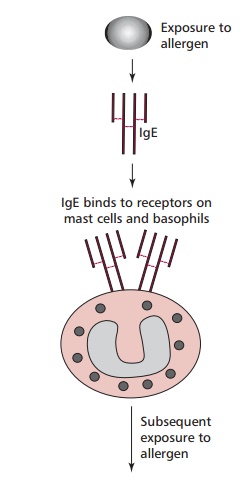 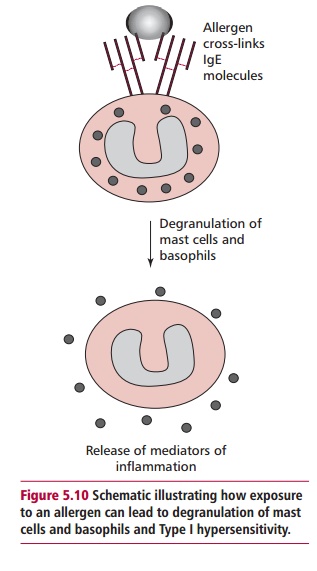 Type I hypersensitivity is the most common form of the immunological hypersensitivities and is estimated to affect between one in 5–10 individuals, with conditions, such as allergic rhinitis, allergic asthma and food allergies.

Allergic rhinitis or hay fever is extremely common and its effects are well known. Seasonal allergic rhinitis typically presents in the spring and summer and is generally brought on by pollen to which the individual has been sensitized. Some individuals show sensitivity to many types of pollen (Figure 5.11), including well-known ‘culprits’ such as ragweed, while others are allergic to a single type of tree pollen. Individuals who suffer allergic rhinitis all year round are most likely to be allergic to other types of allergens, such as the dead skin cells sloughed from household pets, or the feces of house dust mites (Figure5.12)which thrive in warm, carpeted dwellings. Although allergic rhinitis isnot life threatening, it can be very debilitating. 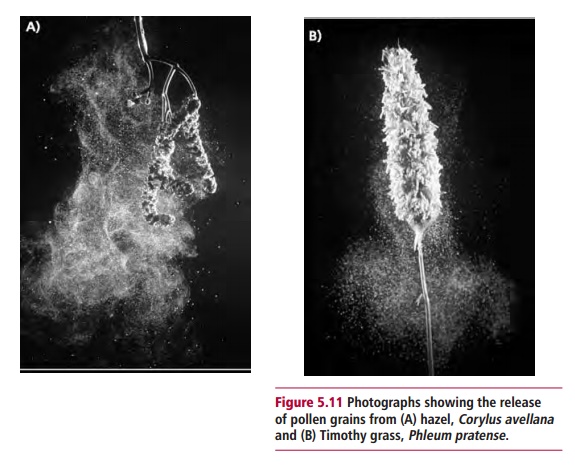 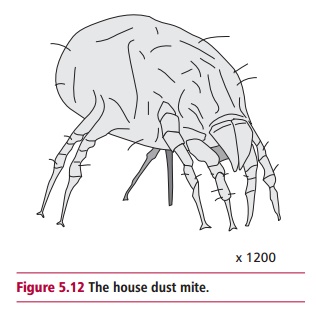 Allergic asthma is a serious and potentially life-threatening condition brought on by air-borne allergens, such as those which trigger hay fever. In patients with allergic asthma, sensitization to a range of air-borne allergens stimulates inflammation in the respiratory tract, narrowing the airways and eventually leading to hyperreactivity of the muscles of the bronchial tree. The condition is very distressing particularly during an asthmatic attack, when severe respiratory distress may require emergency treatment. The incidence of asthma is increasing in children for which various explanations have been put forward. For example, it may be that increasing air pollution is predisposing patients to more frequent asthmatic attacks by increasing the hyperreactivity of the bronchial muscles.

Allergies to food are also seen in atopic individuals. Normally, the allergy will present as a skin rash, possibly with diarrhea, within an hour of consumption of the particular food involved. Foods known to cause allergies include eggs, shellfish, mushrooms and strawberries. Recently, much attention has focused on the extent of severe allergic reactions to nuts, especially peanuts. This may be due to the increased use of peanut paste as a thickening agent in the preparation of processed foods. Individuals who are allergic to peanuts may suffer rapid and life-threatening allergic reactions and are advised to avoid processed food unless the ingredients are clearly labeled. It has also been known for individuals to suffer severe reactions to certain fruits, such as papaya, though this is rare.

Management of Type I hypersensitivity

The most appropriate strategy for treating Type I hypersensitivity is to identify the allergen and to avoid it. Laboratory tests to identify the allergen in question may involve skin testing. Extracts of common allergens are injected intradermally. In sensitive individuals, the causative allergen will produce a ‘wheal and flare’ skin reaction within 20 min. The ‘wheal’ is a raised red lump, while the flare is the red inflamed area that surrounds it. Investigations of Type I hypersensitivity include the radioallergosorbent test (RAST) which measures the level of allergen-specific IgE in the blood. This involves incubating samples of serum from a patient with the potential allergen immobilized on a solid support, any IgE that becomes bound to the allergen is then detected by the addition of 125I-labeled anti-IgE antibodies.

When complete avoidance of the allergen is not feasible, drugs may be used to control the symptoms. These include antihistamines, such as brompheniramine maleate and loratadine, anti-inflammatory drugs, such as corticosteroids, and ‘Intal’ which prevents mast cell degranulation.