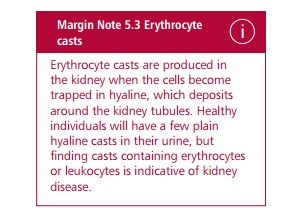 The binding of antibodies to alveolar membranes causes hemoptysis, that is, the coughing up of blood from the lungs and about 40% of patients experience chest pain. Hemorrhaging from the lungs may eventually lead to respiratory failure. There is some suggestion that the binding of antibodies to the alveolar basement membranes is facilitated by exposure to organic solvents, which increase the permeability of the alveolar capillaries. The incidence of antiGBM disease is rare, of the order of 0.5 cases per million in the UK. Unlike mostautoimmune disease, it shows a predominance in males, with younger males generally presenting with both lung and kidney involvement.

Antiglomerular basement membrane disease can be diagnosed from linear deposits of antiGBM antibodies, which can be visualized by immunofluorescence on a kidney biopsy. An early diagnosis is essential and treatment must be started immediately. Therapy involves removal of circulating antibodies by plasmapheresis and the administration of immunosuppressive drugs . The mortality rate for antiGBM disease is improving, and is currently at 10%, although most patients develop end stage renal disease. In the past, the disease was invariably fatal.