The role of complement in immune defense was outlined. Here it will be described in more detail.

The role of complement in immune defense was outlined. Here it will be described in more detail. The activation of complement results in the:

The value of these roles cannot be overestimated. Complement may be activated by one of three pathways: the classical pathway, which is activated by IgG or IgM, following binding to an antigen; the alternative pathway, which is stimulated principally by components of the cell walls of bacteria and yeasts; and the lectin pathway, which is initiated by the binding of mannose binding lectin (MBL) to bacteria. Complement proteins C1, 2, 3 and 4 are involved in classical activation, while Factors B, D, H, I and P are involved in the alternative pathway activation. Activation of the lectin pathway requires MBL, MBL-associated serine proteases (MASP) 1 and 2 and C2, C3 and C4. All three pathways can lead to the production of membrane attack complexes (MACs), which are composed of C5b, C6, C7, C8 and C9. These cause lysis of the pathogen; in addition, fragments of activated complement proteins, such as C3a, C4a, C5a, promote inflammation by binding to mast cells and causing them to degranulate and release inflammatory chemicals, such as histamine . These chemicals may also promote the chemotaxis of neutrophils out of the inflamed vessels. Other complement proteins, such as C1q, C3b and C567 act as opsonins. The absence of any of these proteins can severely compromise health. Complement is potentially very inflammatory once activated and there are a number of regulatory molecules which either prevent unregulated activation of complement, such as C1 inhibitor (C1INH), or which prevent damage to innocent bystander cells, such as Decay Accelerating Factor (DAF). 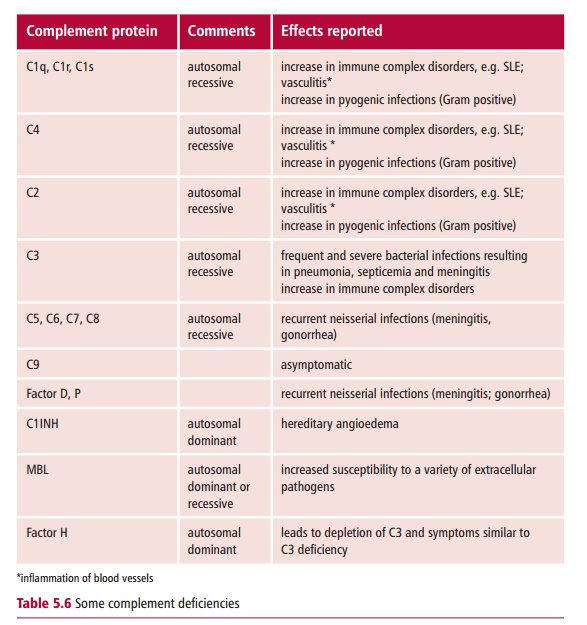 Inherited deficiencies of each complement protein have been described (Table5.6). Deficiencies in several of the early classical pathway proteins result inan increased incidence of immune complex disorders, showing the role of complement in helping to remove immune complexes from the circulation. Over 90% of patients with a homozygous C1q deficiency and 10% of patients with a homozygous C2 deficiency develop SLE. A deficiency of MBL is associated with increased incidence of infections with, for example, Pseudomonas aeruginosa. Newborn babies and infants are particularly at riskfrom this deficiency, indicating the importance of this pathway in protecting the young from infection.

Deficiencies in the classical and the alternative pathways can be detected in the laboratory by carrying out the CH50 and AP50 tests respectively. The CH50 test measures the ability of the patient’s serum to lyse antibody-coated sheep erythrocytes, while the AP50 determines its ability to lyse these uncoated cells in rabbits. Results are expressed in terms of the ability of the serum to induce lysis of 50% of the target erythrocytes. Individual complement proteins can be measured by immunoassay, using specific antibodies. Thus C3 and C4 can be measured by nephelometry, single radial immunodiffusion or by ELISA .

Hereditary angioedema (HAE) results from faults in the activity of the complement regulator, C1 inhibitor (C1INH). This protein normally functions to prevent the overactivation of the first part of the classical pathway by inhibiting C1r and C1s. The lack of the inhibitor leads to consumption of C4 and C2. Two types of HAE occur. Type I results from reduced levels of C1INH while in Type II the inhibitor is present but nonfunctional. The condition is an autosomal dominant disorder, which has an incidence of one in 50 000 to 150 000, with 85% of cases being Type I.

The disorder presents as noninflammatory and painless swellings of the skin, especially that of the limbs, which is often precipitated by physical trauma and anxiety. Abdominal pain is caused by the involvement of internal organs, such as the stomach, bladder and intestines. Severe edema of the larynx can cause death. Treatment during attacks is to administer fresh frozen plasma or commercially available C1-INH. Prophylactic treatment with danazol, an androgen, has been shown to stimulate the synthesis of C1-INH, but prolonged treatment may result in unpleasant side effects, such as virilization in women and suppression of testosterone production in men . 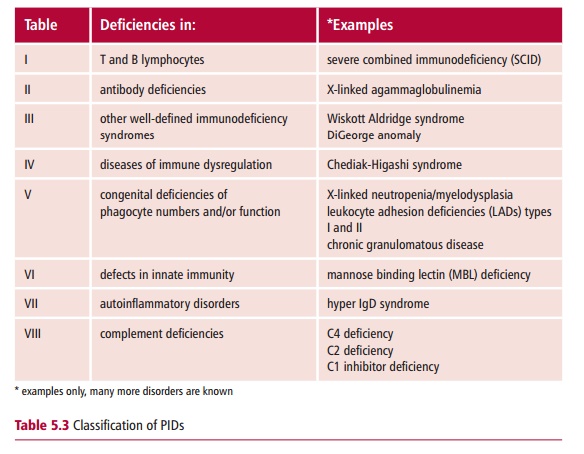