Autoimmune disorders are often classified according to whether they are organ-specific, affecting only one organ or are systemic that is, affecting multiple organ systems .

Autoimmune disorders are often classified according to whether they are organ-specific, affecting only one organ or are systemic that is, affecting multiple organ systems (Table 5.7). In addition, destruction of cells and tissues can be brought about by autoantibodies and/or cell-mediated immunity. For example, in multiple sclerosis (MS) patients produce antibodies against myelin, the fatty material surrounding the axons of nerves. In addition, MS patients have TH and TC lymphocytes in their blood and cerebrospinal fluid, which are specific for myelin protein. Thus, humoral and cell-mediated autoimmunity may contribute to the demyelination of nerves in MS patients. In some instances, autoantibodies can block or stimulate a cell receptor. Myasthenia gravis is an example of the former, while Graves disease is an example of the latter. Like most classification schemes, that of autoimmune disorders is not perfect. For example, Goodpasture’s syndrome directly affects both kidneys and lungs while MS exerts systemic effects by attacking one type of tissue only. 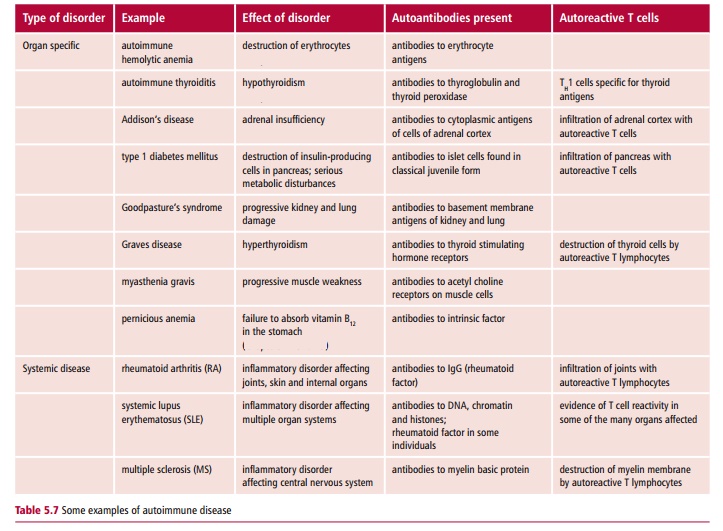 Many, but not all, autoimmune disorders, affect a preponderance of female patients, with three times as many females as males presenting with autoimmune diseases. The reasons for this gender bias are unclear but may be related to sex hormone levels. Many autoimmune disorders show a link with the type of MHC antigens that are present on cells. In humans, the MHC is known as the HLA system. The links between HLA type and different diseases is described. So, for example, patients with Goodpasture’s syndrome have a higher incidence of HLA-DR2 than the healthy population.