Type III or complex-mediated hypersensitivity is brought about by immune complexes that usually involve antibodies to soluble antigens. Immune complexes can be harmful because they activate complement, triggering inflammation and the influx of neutrophils into an area.

Type III or complex-mediated hypersensitivity is brought about by immune complexes that usually involve antibodies to soluble antigens. Immune complexes can be harmful because they activate complement, triggering inflammation and the influx of neutrophils into an area. Over a period of time, this can cause tissue damage, principally due to lytic enzymes released by dying neutrophils. As the size of immune complexes varies, depending on the relative proportions of antigen and antibody, the clinical consequences may vary. For example, in autoimmune diseases such as RA immune complexes between rheumatoid factor and IgG are produced in antigen excess. These complexes are small and soluble and travel in the circulation. They may adhere to the insides of blood vessels, triggering vasculitis, or terminate in the kidney and cause nephritis. In intrinsic allergic alveolitis, immune complexes produced in the alveoli are large, and precipitate in the lungs, causing alveolitis. The name ‘intrinsic allergic alveolitis’ covers a number of 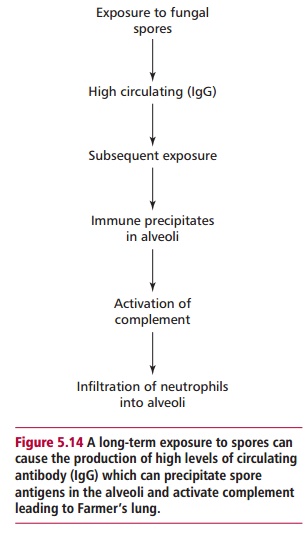 occupational diseases, in which workers are exposed to air-borne immunogens. A typical example of this disorder is Farmer’s lung (Figure 5.14). This disorder typically begins in winter time, when the farmer develops a cough. Since this is not an unusual occurrence, the disease may go unrecognized for several years. However, the disease is progressive and, if untreated, will progress to emphysema. The disease is related to the farmer moving hay to feed livestock during the winter. Ascomycete fungi grow well in the warm damp conditions at the center of a haystack, and a cloud of spores are released when the hay is moved. The farmer inhales the spores and, over months and years, develops high levels of circulating IgG to immunogenic molecules which have been leached from the spores. With high levels of IgG in the blood supply to the alveoli, further exposure to spore antigens causes large immune complexes to precipitate in the lungs, setting up inflammation in the alveoli.

Successive winters may result in immune complex-mediated damage to the lungs, with fibrosis and loss of gas exchange capacity. Although Farmer’s lung is classified as an antibody-mediated hypersensitivity, it is now recognized that cell-mediated immunity is also involved and that damage caused by specific T cells also contributes to the disease. It is essential that Farmer’s lung be diagnosed early to avoid permanent damage to lung tissue. Treatment in the early stages may simply involve avoidance of the antigen, although corticosteroids may also be used to treat the inflammatory reaction.