Systemic lupus erythematosus (SLE) is an autoimmune disease in which about 95% of patients have antinuclear antibodies (ANAs) in their plasma.

Systemic lupus erythematosus (SLE) is an autoimmune disease in which about 95% of patients have antinuclear antibodies (ANAs) in their plasma. The deposition of immune complexes leads to widespread inflammation that affects many organs systems within the body. Clinical features of the disease are summarized in Table 5.9, the commonest presentations are arthritis and skin rash, particularly the butterfly rash of the face (Figure 5.9). Renal disease occurs in approximately half of affected individuals, with nephritis developing early on in the disease. Although the etiology of SLE is uncertain, the systemic nature of the disease is linked to the type of autoantibodies present. The disease primarily affects women of reproductive age, although much younger and much older patients have been seen. The female to male ratio is about 4 : 1, although in younger patients this gender bias does not occur. 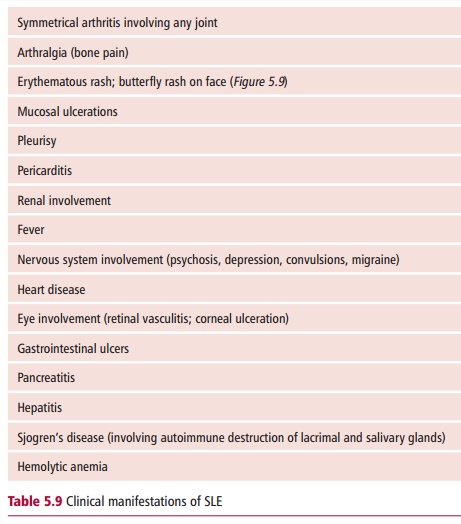 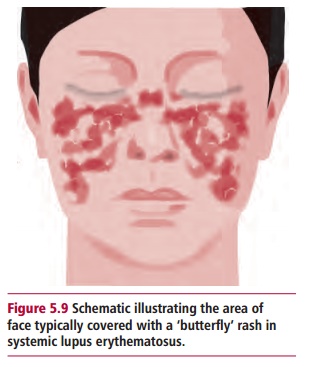 Unfortunately different patients have different patterns of symptoms and their variety in this multisystem disorder has, in the past, presented difficulties with diagnosis, so it must take full account of the range of presentations. Diagnosis can be helped by demonstrating the presence of ANAs in samples of plasma, using indirect immunofluorescence on cultured Hep-2 cells. The commonest pattern seen is a diffuse staining throughout the nucleus due to antibodies against chromatin. It is also possible to detect different patterns of fluorescence which are indicative of antibodies to different nuclear antigens and which can help in diagnosis or in assessing prognosis (Table 5.10). Autoantibodies against extractable nuclear antigens(ENA) can also be detected by RIA or ELISA . Positive tests forANAs require further investigations, for example with tests for antidouble-stranded dsDNA (dsDNA) antibodies. The presence in the blood of so-called LE cells, which are neutrophils containing phagocytozed nuclei and resemble large multinucleate cells, is also indicative of SLE. Other laboratory tests used in the diagnosis of SLE include those listed in Table 5.11. Rheumatoid 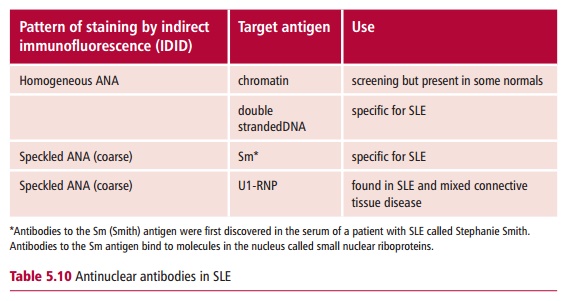 factor and the presence of antibodies against cardiolipin may also be present, although these are not specific for SLE.

Systemic lupus erythematosus is treated with immunosuppressive drugs, such as azathioprine or cyclosporine although the use of such drugs in patients prone to kidney disease needs careful monitoring. In addition, patients maintained on immunotherapy are more susceptible to infectious diseases. The prognosis for sufferers of SLE has improved greatly over the last 50 years because the disease is now diagnosed earlier. For example, in the 1950s, most patients died within 10 years of diagnosis, whereas today around 90% are alive 10 years after diagnosis.