Rheumatoid arthritis (RA) is a chronic, painful and debilitating condition characterized by symmetrical arthritis and radiological changes to the bone.

Rheumatoid arthritis (RA) is a chronic, painful and debilitating condition characterized by symmetrical arthritis and radiological changes to the bone. The revised classification of rheumatoid arthritis (1988) is shown in Table 5.8. Autoantibodies are present in the plasma of patients with RA. Thecommonest, occurring in 70% of cases, is an IgM class antibody directed against IgG, called rheumatoid factor (RF). However, RFs belonging to the IgA and IgG classes have also been detected. The presence of RF causes large amounts of immune complexes to be formed, since IgG is present at relatively high concentrations in the blood. The complexes may adhere to blood vessel walls, activating complement and initiating an inflammatory reaction. While a minority of patients suffer a single episode of joint inflammation with long-term remission, most have a progressive illness characterized by intermittent ‘flares’. In periods of active joint inflammation, the affected joints (Figure5.7) are painful, swollen, red and warm to the touch; all characteristics of theinflammation within them. The presence of RF and subsequent inflammatory disease does not, however, adequately explain the pathogenesis of RA. Cell-mediated immunity is known to be heavily involved in joint destruction. The synovial membranes of affected joints are infiltrated with small lymphocytes, especially TH1 cells, monocytes and macrophages so that the membranes themselves become thickened. Activated macrophages within the synovial fluid produce cytokines, such as IL-1 and tumor necrosis factor @ (TNF @), which mediate erosion of bone. The accumulation of inflammatory neutrophils within the synovial fluid also contributes to the damage to the cartilage. Patients may also suffer inflammation of blood vessels or vasculitis and about 20% have subcutaneous rheumatoid nodules, often on the elbows and forearms but which may also occur in internal organs. The nodules consist of a mass of monocytes, lymphocytes and plasma cells surrounding a necrotic core, and probably represent the progression of vasculitis. 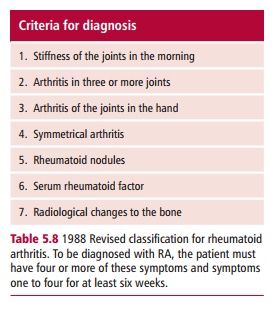 The etiology of RA remains unknown, despite numerous infectious agents having been implicated over the years. However, RA remains one of the most common autoimmune disorders, with an incidence of one to two per 100. The female to male ratio is approximately 3 : 1 and the disease manifests maximally between the ages of 40 and 60, although juvenile forms also exist. 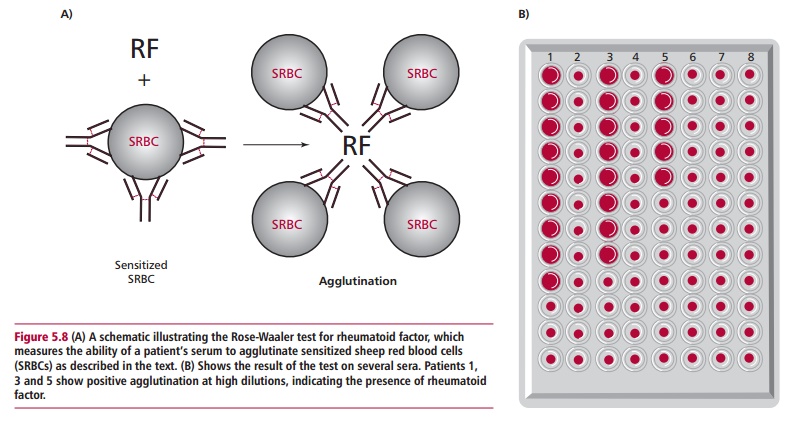 Rheumatoid factor can be detected in plasma or serum by using the Rose-Waaler test, which determines the ability of the serum to agglutinate sheep erythrocytes sensitized with specific IgG antisheep erythrocyte antibody (Figure 5.8). Alternatively, latex particles nonspecifically coated with IgG can be used. A smaller proportion of individuals, around 40%, with RA also have antinuclear factors and these are also seen in patients with systemic lupuserythematosus (see below). Treatment of RA is with immunosuppressive agents such as methotrexate and anti-inflammatory drugs, including steroidal anti-inflammatory drugs (SAIDs), such as corticosteroids, and the nonsteroidal anti-inflammatory drugs, for example aspirin. New treatments aimed at blocking the effect of TNF @ have been trialled. These involve either the infusion of a monoclonal antibody to TNF @, or the administration of soluble receptors for TNF @. In the latter case, the soluble receptors bind to TNF and prevent this inflammatory cytokine from binding to receptors on cells. The prognosis for patients with very severe disease is poor in terms of five-year survival. However, even with less severe disease, the condition is painful and debilitating, particularly during periods of active disease. The long-term use of immunosuppressive drugs leads to an increased susceptibility to infection.